The price of fuel fills the patience of South Africans 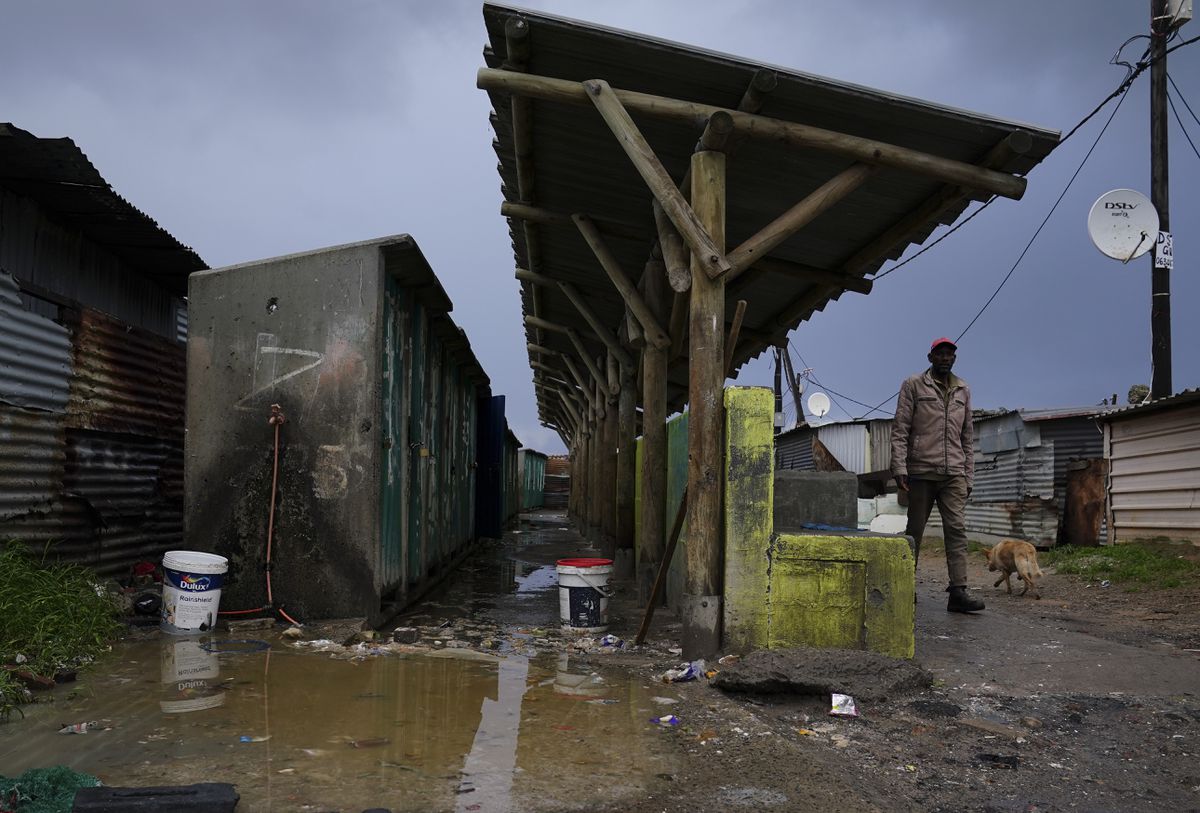 Nyasha Matambo is worried. He left his home in a modest suburb 20 minutes from Cape Town early and was half an hour late for work due to heavy traffic early in the morning. But this domestic worker doesn’t even know if she can come to work the next day. He is concerned about a call for a nationwide strike that has been circulating on various social networks and messaging apps in recent days. It is not known where and by whom it was launched, but the warnings are very precise: demonstrations are planned across the country in which citizens will express their dissatisfaction with the increase in fuel prices and the associated effects, including increases in food prices, should express due to higher operating and transport costs.

“When protests take place and are well attended, be aware of the following risks: heavy foot traffic, intimidation, slow motorcades and roadblocks,” the text reads. Next, it provides a huge list of locations considered to be highly noisy, including public facility headquarters, gas stations across the country, major thoroughfares, and national highways. The ad is explosive.

South Africa is not one of the most expensive countries in the world to fill up the tank. Gasoline 95 costs 1.43 euros compared to more than two euros in Spain, for example, while each country’s per capita income is 4,833 euros in the first and 27,000 in the second. Despite this, last May the State Treasury and the Department of Natural Resources and Energy (DMRE) made a temporary 1.5 Rand cut in the general fuel levy to mitigate the impact of the spike in oil prices that resulting from the conflict between Ukraine and Russia and the sanctions that followed, leaving behind the liter of petrol R23.94 compared to the 19.36 Rand (1.15 euros) it cost in January 2022. And for diesel, the increase is similar.

In South Africa 18 million people live on less than 37 euros a month, while the average purchase price has increased by 35 euros in the last year

More than ten thousand kilometers away, the fighting between Russian and Ukrainian soldiers is feeling in the pockets of South African citizens. A difference of less than 30 cents might not seem like much, but it makes an enormous difference in the quality of life for millions of families in a country where the minimum wage is 270 euros but the average price of the shopping cart has increased by almost 35 euros in the last yearand the inflation rate around 5.9% and is expected to increase.

“Of course I notice that. Especially the price of cooking oil,” complains Agnes Wisilamu, a Zimbabwean and also a domestic worker. “I have two sons, 17 and 19 years old, both studying; At that age they eat a lot…”. As a single mother, she has to balance the accounts. For a day’s work, he charges 170 Rand, around 10 euros. From this amount he has to deduct what he spends on the round trip bus ticket from his home in the disadvantaged area of ​​Langa to the center of Cape Town. “Now I’m paying 16 Rand each way, that’s 32 of the 20 it cost in January,” he calculates.

South Africa is one of the wealthiest countries on the continent, but also the most unequal nation in the world. Before the end of the racist apartheid regime in 1992, the white minority was much wealthier than the black majority. When Nelson Mandela became president, he promised to close that gap, but 40 years later it persists: while 87% of the land was owned by white landowners, things are not much better for blacks, who make up almost 90%. of the country’s 51 million inhabitants who, however, earn three times less on average than whites. Corresponding government datamore than 18 million people live on less than 37 euros a month and 13 million have no income.

South Africa’s economy has been suffering since 2009, when the country went into recession for the first time in 17 years, and has not returned to previous levels of growth since. In the last two years, the arrival of Covid-19 has worsened the situation as this country suffered from one of the toughest lockdowns in the world and it has had a very negative impact on millions of people, especially those who rely on informal jobs.

And although the pandemic is fast becoming a thing of the past and measures are being eased – 43% of South Africans have the full vaccination schedule and can now go out without a mask – the disaster is great. Today the country has reached an unemployment rate of 34.5%. Almost half of the country’s total black population, or 45 million, is unemployed. And among young people the situation is even worse: 63.9% of them are unemployed, according to national statistics.

Although there is a R350 monthly subsidy called Social Relief Subsidy approved last March, which more than seven million people have applied for and which is set to be granted until March 2023, it was then suspended for a month without justification not paid : “It is totally unacceptable that the grants have not been paid to the beneficiaries in the last two months (April and May). This plunges the 10 million beneficiaries into absolute poverty and despair,” he condemned on June 10 it is a statement the Congress of South African Trade Unions (Cosatu). The government reported last Monday that these subsidies will resume before the end of the current month, but for now they are not reaching the beneficiaries.

The most recent political corruption scandals are also affecting the dissatisfaction of the population. Various members of the African National Congress (ANC), Mandela’s party and in power since the beginning of the democratic era, have been involved in scandals of varying magnitude, but one of them has cost South Africa dearly: the indictment of former President Jakob Zuma. The country’s former top leader between 2009 and 2018 was sentenced in July 2021 to 15 months in prison for contempt of justice after refusing to testify up to three times on 16 charges of fraud, corruption and organized crime.

When the verdict was passed in July last year and Zuma went to prison, the worst riots in 40 years took place. Supporters of the former president went out to set fire to the streets, and store looting, violence and looting were the order of the day in Gauteng and KwaZulu-Natal states for eight days. The tally of the uprising was 337 dead, more than 40,000 stores destroyed, one loss a million jobs -other studies calculation two million – and 50,000 million rand; almost three billion euros.

Given this social unrest, Niasha Matambo would not be surprised if the nationwide strike succeeds and provokes violent unrest. For now, she knows she has no choice but to leave her three-year-old daughter at home. “Your school will not open; They told me when I took them to class this morning,” she assures. And he prefers it because he’s scared of what might happen. “When these people he says something, he really means it; They cut roads, burn tires, and violently deal with those trying to work. I still remember the shots fired at drivers last year,” he says. some incidents that have occurred in July 2021, in which several were wounded by firearms.

By that she means the drivers of the taxis, who in South Africa are not cars, but private minibuses, who decide on the route and price. And that they are the ones who really decide whether to protest or not. She really fears the support of the National Taxi Alliance (NTA) and the South African Taxi Council (Santaco), the main unions.

That’s why both assistants also consider asking their employer to be absent one day and make up the hours the next. But like millions of people, Matambo and Wisilamu are paid by the day they work, they don’t have a fixed salary, so before asking, they need to do the math and see if they can afford it.

A dead protest before birth

Meanwhile, South African social networks are multiplying messages with the label #national shutdown the days before the protest. “I fully support the strike because everything is a disaster, we need to fix the country,” wrote one Twitter user. “I’m not unemployed or poor, I’m a middle class citizen but I can’t take it anymore,” tweeted another. However, many other citizens discourage Internet users from participating in the interests of peace and non-violence.

The media, for their part, downplays the attractiveness and has barely made national headlines in recent days. Only in the late afternoon of the day before the protest did some newspapers report that NTA and Santaco had distanced themselves from the matter. “The taxi industry will not be intimidated by people who encourage disorderly conduct,” they tweeted from Santaco. They also distance themselves from Cosatu. “We advise our members not to join this strike as it is an unprotected action that could result in their dismissal,” says spokeswoman Sizwe Pamla, although she also points out that the union faces the same grievances as the organizers share whoever they are.

D-Day came, that was last June 10th, the country woke up quietly. The news reported no disruptions and the gas stations, which were said to be experiencing more problems, reported no incidents; Neither federal highways nor factories. In the morning, Nyasha Matambo sent a WhatsApp: “Everything went well, I was able to go to work.” The call fizzled out as quickly as it was raised and, as usual, South Africans have shown that they prefer peace to violence. But the economic suffocation is becoming more evident and the latest news affecting the economy grew by 1.9%getting it back to pre-pandemic levels still means nothing to Matambo and Wisilamu, who do nothing but watch the holes in their pockets increase and their patience ebb.