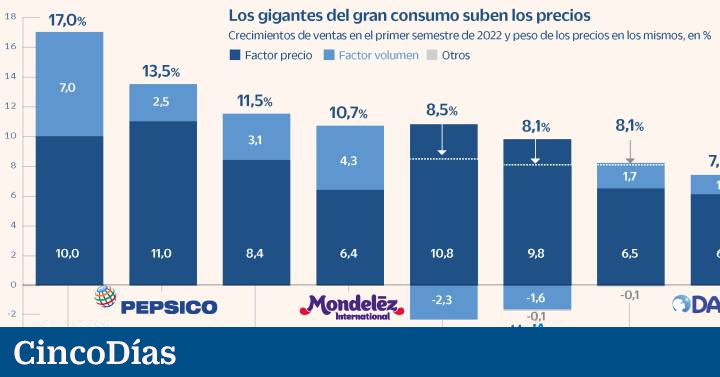 The main multinational corporations in the great consumption, i.e. food, drink and household products, saw significant improvements in cumulative income in the first half of the year, according to the results, which have all come out in recent weeks. However, across all the companies analysed, nine of the most important companies in the industry, there is one common factor that explains these increases: the price increases that they implement in order to preserve margins and in this way offset the effects of inflation on their business.

Coca-Cola, Pepsico, Ab Inbev, Mondelez, Kraft Heinz, Unilever, Nestlé and Danone positive earnings performance for the first half and Procter & Gamble for the full year following the close on June 30. From 5% P&G per year to 17% organic sales from Coca-Cola. An average growth of 10% for the nine analyzed groups, of which an average of 80 points corresponds to increases the applied prices.

The percentage varies between companies but is high in all. For some, like Kraft Heinz or Unilever, price is the sole reason for half-season growth as both report volume declines. The former improved sales by 8.5% on a 2.3% decline in volume. The second billed 8.1% more despite marketing 1.6% less product.

Nestlé, the global food giant, saw its sales rise 8.1% through June. Of that percentage, 6.5 points, 80%, came from higher prices. The same proportion has occurred in companies such as Danone or Pepsico, while others such as Coca-Cola, Mondelez and Procter & Gamble have a slightly more even balance, with weights around 60%. Of course, in all cases except AB Inbev Brewery, with good volume growth in Q2 compared to Q1, the price factor has increased its weight on revenue growth, underscoring the uptrend.

This is the main theme in the appearances of the executives today, who assume that the situation will continue in the coming months. Unilever CEO Alan Jope clarified last week, “Prices have risen steadily over the past six quarters in response to rising commodity inflation.”

He described how this increase policy reaches a point where sales can be significantly impacted. “We are careful not to raise prices to a point that endangers the long-term health of the company. But we are willing to accept short-term impacts on our competitiveness in some markets where we are price leaders,” he said. to point out that the same increase policy will be maintained in the second half of the year.

It was also anticipated by Mondelez CEO and President and Chief Executive Dirk Van de Put. “There still has to be a price correction. Most of this has already been announced and now we are in the talks and implementation,” he said.

Similarly, Nestlé CEO Mark Schneider made the comments before analysts. “Upgrades are still being made. Our gross margin is still being impacted. It will continue to be so in the second half of the year.” The Swiss giant’s gross margin ended the half at 46%, down 280 basis points from a year earlier. Operating income declined 3.5%, despite the 8.4% increase in sales mentioned above.

In its half-year results presentation nestle He described a context of “unprecedented and significant cost inflation,” though Schneider remains confident the pressure on margins is “temporary.” “Prices have yet to catch up with rising costs. As a food company committed to responsible pricing, adjustments don’t work as quickly as they do for other consumer goods categories,” so he expects such price increases to translate into better margins in the coming months.

Nestlé isn’t the only company working on forced marches to keep inflation from eating away at the profitability of its business. All analyzed companies reduced their operating margins, which in most cases was also influenced by exchange rate effects.

In terms of net profitability, the results are mixed. Pepsico improves it 40% at the end of the half to $5,690 million, but profitability also suffered a 40% decline in the second quarter. “We are all concerned about high inflation and its impact, particularly at the bottom of the pyramid. There we are more careful to ensure that these consumers remain in our categories,” said Pepsico’s Spanish CEO and President, Ramón Larguarta, in the middle of the month.

end of the year. With the exception of brewery AB Inbev, all analyzed consumer goods companies that have just closed the first half of the year have revised upwards their full-year sales growth forecasts precisely because of the price increases they have implemented. Coca-Cola has climbed from an 8% growth forecast for its organic sales to 13%; Pepsico from 8% to 10%, Nestlé from 5% to 8% and Mondelez from 4% to 8%. So is Unilever, which expects it to come in above the 6.5% expected at the start of the year, and Kraft Heinz, which is expected to grow in the high single digits. For its part, Danone ranges from a range between 3% and 5% to a range between 5% and 6%. AB Inveb keeps its guidance unchanged.