The president of the World Bank is visiting Morocco. Important messages on economic reform 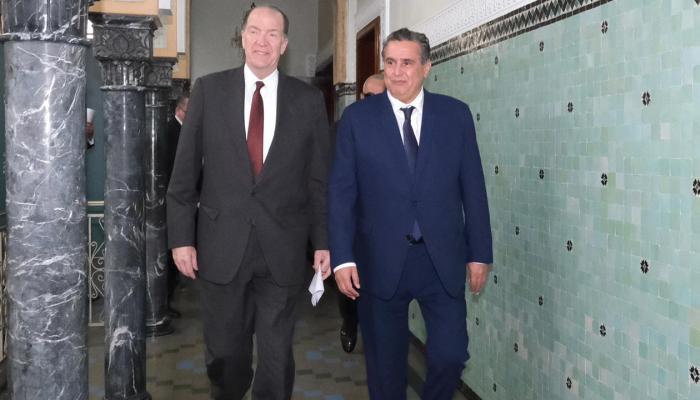 The President of the World Bank Group, David Malpass, arrived in the Kingdom of Morocco on an official visit to discuss forms of cooperation.

The Moroccan Prime Minister, Aziz Akhannouch, received this Wednesday at the Government headquarters in Rabat the President of the World Bank Group, David Malpass, who is on a working visit to the Kingdom.

According to a statement from the Presidency of the Government, Al-Ain News received a copy of it. The meeting was an opportunity to highlight the importance of the partnership that links Morocco with the World Bank Group, and to review ways to strengthen and develop it. . .

The statement added that the meeting is an opportunity to keep pace with the important strategies and programs developed by Morocco under the leadership of King Mohammed VI, as well as to deliberate on the global situation characterized by initiatives aimed at achieving economic recovery and getting out of the repercussions of the Corona epidemic and the wave of high prices for raw materials in the world.

During this meeting, Akhannouch praised the level of the strategic partnership between the Kingdom and the World Bank, which aims to support and accompany the economic and social development of Morocco, reviewing the most important structuring and reform projects undertaken in the Kingdom.

The statement highlighted that the Moroccan Prime Minister affirmed the Kingdom’s determination to continue implementing a set of measures aimed at reducing the repercussions of the Corona pandemic, stimulating private investment and achieving economic recovery.

For his part, the president of the World Bank Group, David Malpass, reiterated the group’s commitment to support and accompany the economic and social development of Morocco.

David Malpass emphasized that the Kingdom has the necessary capabilities to come out of the repercussions of the crisis stemming from the Corona pandemic.

It is noteworthy that Morocco joined the World Bank in April 1958, and from 1962 to today it has received funding for many programs and schemes.

Also attending on behalf of the World Bank Group was Belhaj Farid, Vice President in charge of the Middle East and North Africa region, Jesco Heschel, World Bank Regional Director for Reconstruction and Development, and Xavier Real, Director of the International Company financial.

For his part, Fattah welcomed the quality of the exemplary long-term partnership linking the Kingdom of Morocco with the World Bank Group. He also reviewed the main priority reform projects undertaken by Morocco to promote dynamic recovery and strengthen the resilience of the economy, especially the economic recovery plan sponsored by King Mohamed VI and the generalization of social protection project and a reform plan of the public sector.

In this context, the official called on the World Bank to further increase its financial and technical support for the reform dynamic initiated by the government.

Fattah Alaoui expressed his gratitude to the World Bank Group and the International Monetary Fund for their trust in Morocco to host the 2023 Annual Meetings after the first postponement.