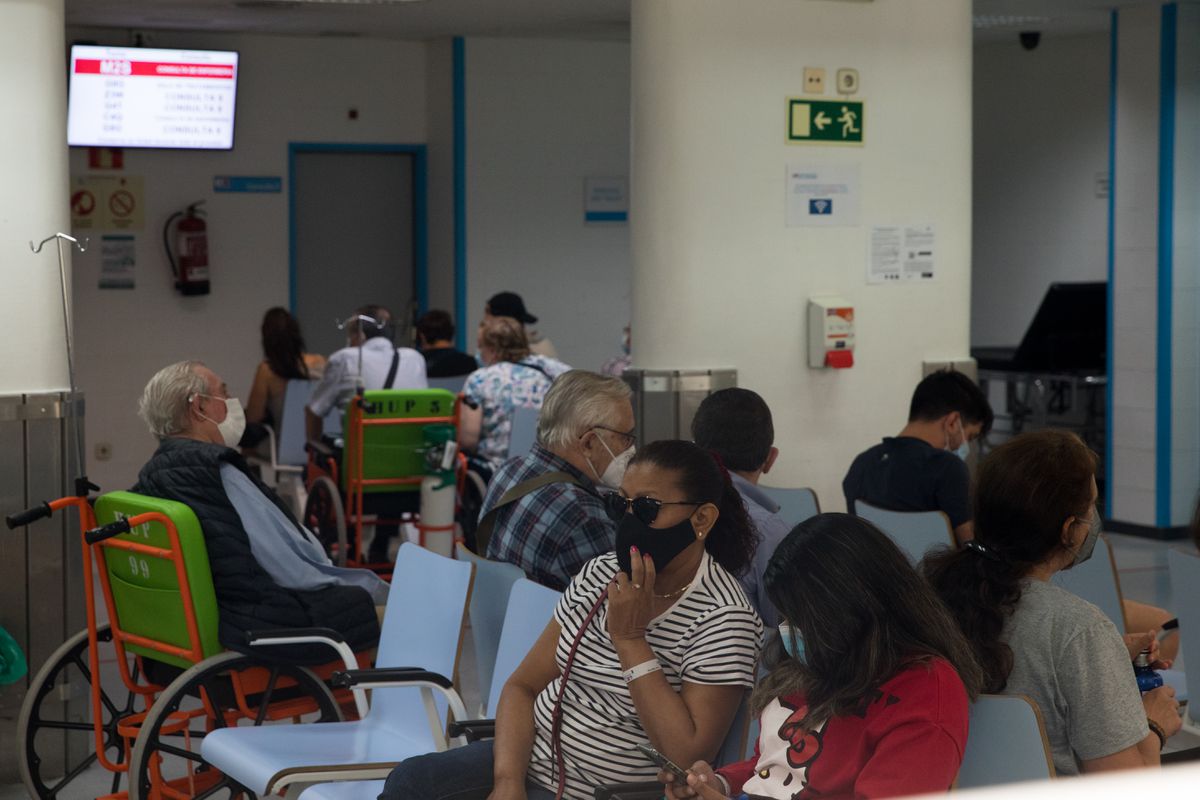 Sergio Sánchez, 40, has gone to the emergency room at Madrid’s Gregorio Marañón hospital because he has a ganglion cyst in his throat that is causing him severe pain. When he sees the people who have been waiting for hours, he despairs. He left in the morning thinking that he would be seen soon. But not. He has hours ahead of him. The same situation is repeated this Wednesday in another hospital, in Ramón y Cajal. Victoria Vilaplana, 22, comes to the emergency room with dermatitis on her hands. She was referred there by the dermatologist. He too is desperate. “They will call you,” the nurse tells them. And again the same situation, traced, is seen on October 12. full halls. people looking at the clock. snorts. Flora Diéguez, 78, arrived Tuesday night with a severe sore throat, left and returned the next day in the morning. “I can’t swallow and haven’t eaten anything since yesterday,” the lady complains. Exactly the same thing happens in the Infanta Sofía or in La Paz or in La Princesa.

Health professionals can no longer. Stressed out, they walk through the corridors, almost without lifting their heads. Many are afraid of making mistakes, like Ángel Torralba, emergency doctor at Twelve de October. “That creates frustration, you take it home with you, you don’t sleep well,” he complains. In addition, there are more and more colleagues who are on leave due to Covid. The seventh wave is here, although it is not being talked about. “It’s the perfect storm,” summarizes Ángela Hernández, spokeswoman for the Amyts doctors’ union. “The coronavirus, the admission of elderly patients infected with previous pathologies, the summer holidays that bring the closure of beds and what is happening to primary care, with their emergencies closed.” It is the imperfect cocktail. The emergencies of Madrid on the verge of chronic collapse.

The Department of Health acknowledges that there is “more frequenting in the emergency room,” but adds that the majority of patients “do not need an admission.” According to her, there were a total of 1,807 admissions this Wednesday, 1,734 of them in the ward and 73 in the intensive care unit. But none of this will be understood unless the specific cases are examined.

Collapse in the urgency of H October 12th. Now more than 200 patients, more than 30 patients admitted without being able to go to the floor because there are no more beds available. In June, 35 bunk beds were closed, and 9 observation beds continued to be closed in the emergency room @eruizecudero

The data provided by the pros reveals a system problem that is far from new, but has worsened this year for various reasons, such as the seventh wave and its income, the beds closed every summer or the devaluation of the end of basic services. According to Amyts data collected by the Emergency Coordinator, emergency aid increased by 50% as of Oct. 12. The hospital’s press department lowers it somewhat: “We treat 700 emergencies a day, compared to the usual 500 during this period. And we have 118 hospitalized for Covid.”

For the Infanta Sofia, the increase was 38%. In fact, between June 1 and June 20, 2018, for example, 6,751 people were treated in the emergency room. This year, however, they’ve seen 9,338, also well up from last year’s 7,079. The professionals in La Paz have the same, with the “ulttensive” emergencies, currently with 140 patients “in boxes” waiting to be admitted when the maximum capacity is 105. “We are blocking acute surgical activity. Operations are being postponed because beds are needed. And enormous dehumanization is taking place,” laments Daniel Bernabéu, a doctor from La Paz.

And after the numbers, the faces. First and last names of patients resigned to waiting (or going private after getting paid) and overwhelmed professionals.

“If 700,000 people were treated for primary care emergencies in 2019 and they’re closed now, where are they going?” asks Hernández, the spokeswoman for Amyts, who insists the system is failing and a healthcare model is missing. It refers to the decision of the Madrid Ministry of Health, taken in March 2020, to lower the blinds of the 37 Primary Care Emergency Services (SUAP) to bring their professionals to the Isabel Zendal Pandemic Hospital. Now, two years later, Madrid has announced that after the summer it will only open 17 more, seven of them without doctors, where they will only receive care by appointment.

“And if we also add that the general practitioners are completely overwhelmed, treating more than 50 patients a day, what happens in the end is that many go to other countries or leave directly,” denounces Hernández, who is responsible for this there is a fundamental problem. “Since 1995, the same color has prevailed, they could have made a health model, whatever it was, even if we didn’t agree. But they haven’t done anything, and we’re getting to a point where either change is beginning or it’s in danger of collapsing altogether.

Priority: from blue to red

When a person comes into a hospital emergency room with an illness, the first thing they should do is go through what is known as the Manchester triage system. At that moment, a nurse evaluates the patient to give him some sort of priority: if they put the color red on the report, he needs immediate treatment; if it is orange, you can wait about 10 minutes; yellow, one hour; green, two; and blue, about four. “Imagine what it’s like now that the yellows can wait four or five hours,” explains Torralba, doctor at Twelve de October. This causes a long waiting time, which can sometimes be dangerous for the patient. “They don’t always come in with life-threatening illnesses and many know it, but if they try to go to their health center and give them a three-week appointment, they end up going to the emergency room, which ends up being overwhelmed,” insists he.

The same example was witnessed this Wednesday by Claudia Colorado, 44, who waited nearly an hour this Wednesday just to give her triage data. “There was a long line this morning and only one person at the counter,” he complained at La Princesa Hospital. Once you have received your color there are long hours ahead. The same happened with the patients of Gregorio Marañón. By 11:00 am, the hospital’s emergency room was filled with about 50 people resignedly waiting their turn. Sofía Nicolás, 36, assured that she had planned to “go to the health center but it takes at least a week to make a phone appointment”. As Nicolás spoke, Ezequiel Manzano, 23, leaned on his mother’s shoulder with a high fever and general malaise. “If they don’t call me soon, I’m leaving,” he lamented.

“The glass is full,” warned Marina Parras and Itziar Fortuny, Infanta Sofía paramedics and Amyts union delegates. “And then you see the Zendal closed, with almost no patients, and you’re amazed,” Parras said. “Here the waiting times are six or seven hours day and night,” summarizes Fortuny, adding an additional problem: the lack of troops. “We have the same number of professionals as in 2008 when the hospital opened. And yet the pressure to provide care has increased…”, replies Parras, who also remembers that 12 colleagues in the emergency room “either went to other hospitals because they pay better, to private ones, or they decided directly to to go the profession”. “On weekends, shifts are already filled with one person less…”.

Is this the first time this has happened? “No, every summer when doctors go on vacation, something similar happens because the beds are closed. Or in times of seasonal flu,” explains Hernández. The problem now, he adds, is global computation. Joining this chronic setback are the unending pandemic and basic services no longer acting as a retaining wall. “It’s unbearable. Very, very, stressful,” stresses Bernabéu from La Paz, who adds that the toilets have already been insinuated to change their vacations. “We still don’t even have the quadrant for July,” lament Infanta Sofía’s Parras and Fortuny, who don’t yet know when they will retire.

Does the Ministry of Health believe that the fact that 37 SUAPs have been closed for two years is causing this tension in the emergencies? No speaker responded to the question.

Best of all, adds Torralba of Doce de Octubre, is that in general “people see us and are remarkably friendly”. “Some violent situations have been observed, but this is not the general trend. People just want to be healed.”

- Advertisement -
Share
Facebook
Twitter
Pinterest
WhatsApp
Previous articleThe Executive Branch has approved more than 10,000 million measures so far this year
Next articleFernández Díaz told the judge that he never worked with Villarejo: “I didn’t have a single relationship with him”