“The Perfect Dinner”: punished Kurt after a series of breakdowns – “It’s not possible!” 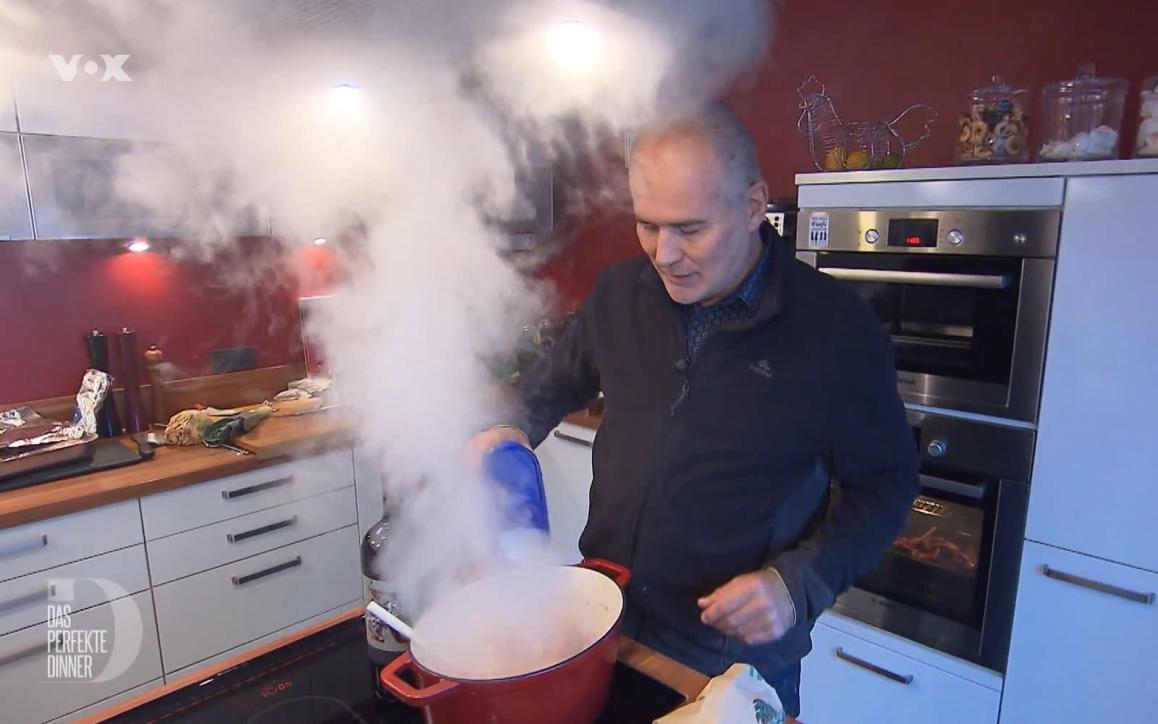 In the Day 5 finale of “The Perfect Dinner” in and around Marburg, Kurt (63) collapsed after collapse. Some call it comedy, others call it completely fucked up. What initially provided entertainment eventually turned into outright rejection for Rainer (66).

Kurt’s “The Perfect Dinner” day in Annerod near Gießen starts early in the morning. At the weekly market, the sales representative quickly picks up the fresh ingredients for his three-course meal. There are:

Amira (27) wrinkled her nose as she looked at the menu: “I don’t like trout.” Chantal (37): “Me neither.” Neither lamb, here Kurt has an alternative with beef fillet. Chantal is scared when it comes to winter vegetables: “No Brussels sprouts, please.” Her dessert doesn’t make her happy either: “Goat cheese doesn’t go with dessert at all.” Rainer is looking forward to the night and is “in the mood for Kurt”. However, he will still miss him.

He also questions Kurt’s time management. Justly. “I’m already 15 minutes late,” Kurt makes the first mistake in making the sauce. “I forgot to caramelize the sugar.” He makes the baguette himself and forgets it in the oven. “I could really bite my work,” he is annoyed at the briquette-like piece.

Kurt is exhausted even before the guests arrive. Amira notices immediately: “I was very nervous.” Despite his aversion to fish, he tries the trout mousse with shrimp and salad. Chantal even raves, “I don’t think it’s bad for the trout.” Rainer had something else in mind: “It wasn’t as fluffy as I would have liked.”

Rainer is “greatly disturbed while eating”

At 8:30 p.m. Amira asks, “How long will it take?” At that time on day 1, Rainer was already done with dessert and everything. Kurt struggles in the kitchen for more cooking time for his meat: “It’s still too raw. Shit. But I miscalculated.” Kurt frantically runs back and forth between the kitchen and the dining room. At the table, he spills a glass of water directly on Rainer’s pants. Chantal snuggles up laughing, “It’s definitely a fun night with you.” Then Kurt takes the meat out of the oven: “Dear God, make it okay.” Unfortunately he is not.

As he serves, he also drops the water bottle: “That’s the gag for today, folks.” Everyone laughs tears. Chantal: “It’s a bit like comedy. Dinner for One.” As she speaks, the agitated host keeps waving his hand in front of Rainer’s nose when he wants to eat his lamb. A no-go for Rainer: “I tried several times to stop his hand. I felt very disturbed while eating. That’s why it was an absolutely negative meal for me.” The goat cheese dessert can no longer save much.

Only 3 points for Kurt’s dinner

Rainer’s conclusion: “All in all, it’s not possible, unfortunately I have to say it.” He doesn’t accept nervousness as an excuse. The receipt is only 3 points. The others are more merciful and grant seven each. With 24 points overall, Kurt is in last place. The winner is Zafi (38) with 33 points, who wants to donate a large part of the 3,000 euros.

- Advertisement -
Share
Facebook
Twitter
Pinterest
WhatsApp
Previous article‘Relief’ as 12-year-old refugee whose application was cancelled, has visa approved
Next articleChancellor Olaf Scholz will personally attend the groundbreaking of the Tesla plant in Grünheide on Tuesday