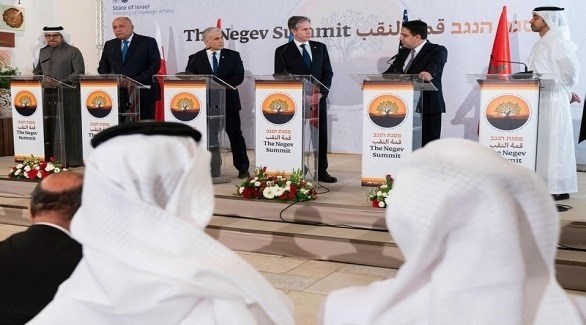 From the Sharm el-Sheikh summit that brought together President Abdel Fattah El-Sisi, the Crown Prince of Abu Dhabi, the Deputy Supreme Commander of the Armed Forces, Sheikh Mohammed bin Zayed, and the Israeli Prime Minister Naftali Bennett, through from Aqaba, Jordan, Egypt, Emirati, Iraq summit, to unprecedented meetings in the Negev between foreign ministers from each of the United States, the Emirates, Egypt, Bahrain and Morocco are drawing the hallmarks of political vitality regional that runs against the clock.

The general line that includes these meetings is the impulse of the Arab peace field to transfer the general understandings with Israel to a reality of detailed alliance that seeks to build a regional strategic architecture in which security, food security, security economy and energy.

In a very complex moment, the moment of the Russian invasion of Ukraine, with all its political and economic repercussions that go beyond the immediate scene of the events, the countries and governments of the aforementioned summits and meetings move away from the traditional alignment.

None of these governments took decisive positions in the conflict, but instead endowed themselves with broad areas of independence that allow them to play roles, protect interests and develop relationships, in a world that is no longer the same as it was four weeks ago.

The impetus of the Russian invasion of Ukraine has matured new dynamics in the region that have been playing with much silence and little publicity, the most prominent of these dynamics is the relationship between Washington and its classic allies in the region, Arabs and Israelis. .

The impressions are the same in Tel Aviv and Abu Dhabi as in Cairo, Riyadh and Manama. The United States seeks to exit the region, withdrawing from its historical commitments and obsessed with reaching a nuclear agreement with Iran that does not take into account the interests of the allies under attack, much less the growing conviction in the United States itself that the agreement it no longer serves Washington’s interests.

In view of this, these meetings say that “blaming” the US’s lax security commitment does not mean that these countries are incapable of formulating rules to protect their interests without the Americans. As for their adherence to US security agreements and commitments, and the need to revive them, this is a fair defense of their investment in historic relations with Washington, without implying that these countries are orphaned without the US sponsor.

These meetings also say that this group of countries, although from different regimes, multiple cultural backgrounds and disparate political experiences, have a discourse on the foundations of regional security in the Middle East, and a similar definition of risks and interests, and that they do not Do not accept orders from anyone, specifying Others have the interests of these countries and confiscate the definition of the risks they face.

In other words, Washington can sign what it wants with Iran, but this does not translate into immediate commitments on the part of the governments that met between Sharm el-Sheikh, Aqaba and the Negev.

A Middle East is in the making. Its birth began with the decision to confront the hijacking of the “Arab Spring” revolutions by the Muslim Brotherhood, and is now completed by confronting the Iranian Muslim Brotherhood’s attempts to hijack Washington’s naive desire to build a of regional stability through the nuclear deal. Construction and accumulation continue.

For the first time, peace is moving from its narrow political framework to an integrated framework of risks and opportunities. The security of bread in Egypt, and it is no coincidence that his name “living” in Egypt is a regional national security, not just an Egyptian national security, and the unannounced agreements to fix the price of oil sold to Egypt are one of the rules for the constitution of this guarantee.

As for the security, economic, investment, trade and tourism link between Israel, the United Arab Emirates and Egypt in the Red Sea region, it is a new feature that aims to take Egyptian-Israeli relations from a cold peace to something much plus. especially if we add the previous understandings on gas in the Eastern Mediterranean, in which Cairo is hosting a forum and the United Arab Emirates will be the host, participating as an observer.

The Sharm el-Sheikh meetings also discussed a new and detailed Emirati roadmap on how to win Syria back from the Iranian embrace, and for the first time found sympathetic Israeli ears.

Regarding the Aqaba meeting, the highlight was the in-depth discussion of the oil link between the ports of Basra and Aqaba, through an oil pipeline in which the UAE will participate in the financing of a large part, to deliver it through the Sea. Red to Egypt. Ambitious plans for electrical interconnection were discussed at various Jordanian-Egyptian-Iraqi summits, under the title of New East.

Here comes the central position of Syria in this emerging political economic development since 2019, and perhaps Lebanon later, whose joining these political dynamics and formations is the most logical step to restore it to a state and a homeland. It is one of the Eastern Mediterranean countries, and one of the emerging ones in the gas market, and has every incentive to reach an understanding with Israel, with Arab, Egyptian and Emirati protection, to ensure its future in the region that lies before us.

The Negev meeting carries all of the above, and increases that it is an implicit declaration of an Arab-Israeli strategic alliance to confront the counter-Middle East led by Iran with its direct missiles, as happened in Erbil, and with the missiles and marches of their militias, as is the case with the attacks on Saudi Arabia and the United Arab Emirates, or with the political depredation carried out by their sectarian militias in Iraq, Syria and Lebanon.

Three summits and meetings, preceded by the one that preceded them and those that follow, aim to present a political, economic and security proposal for a new Middle East, with unprecedented Arab vitality and a courageous aspiration to transfer peace to be the centerpiece of strategic industry in the Middle East.

- Advertisement -
Share
Facebook
Twitter
Pinterest
WhatsApp
Previous articleWorld Cup qualifiers.. Queiroz uses 16 defenders in the match between Egypt and Senegal
Next articleRussia insists on payments in rubles and threatens to stop deliveries: “No payment, no gas”