The network of climate shelters in Barcelona taken with tweezers 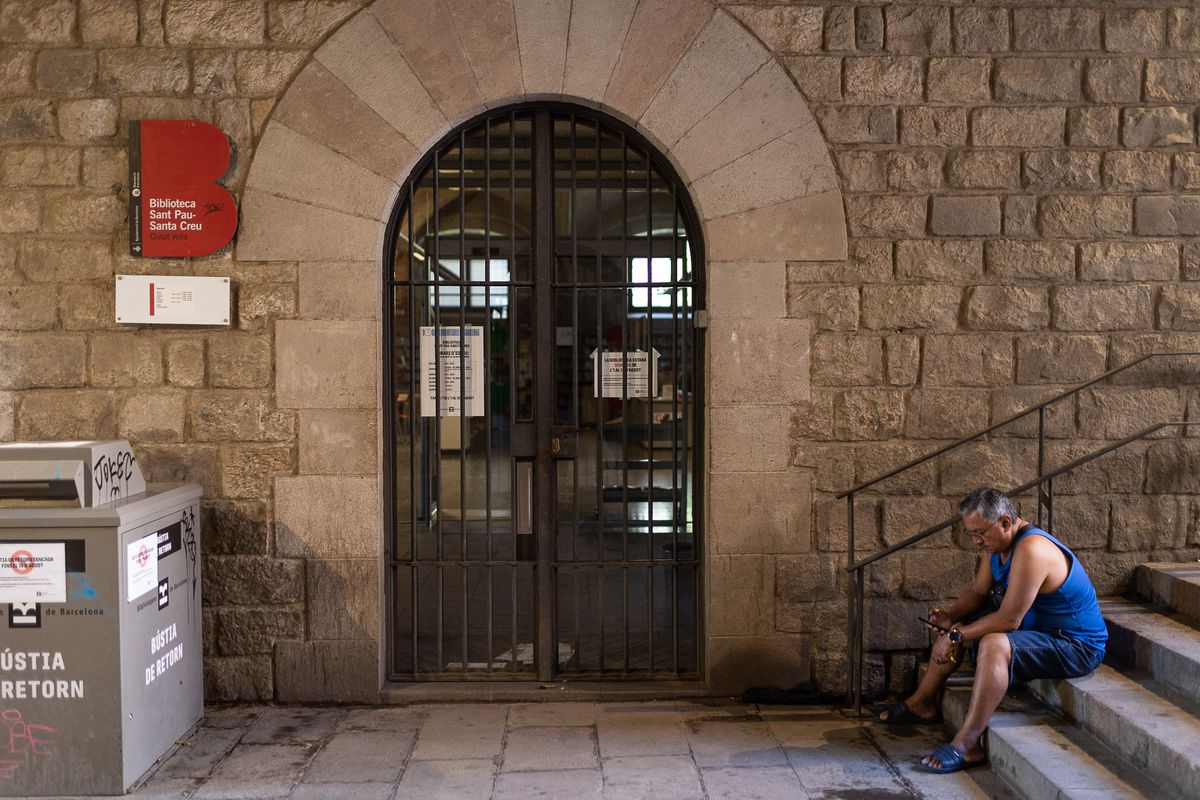 Ascensión Novas, 26, stands alone in the courtyard of the Cervantes School, about to close the gate on Sant Pere Mitjà street in Ciutat Vella, Barcelona. The school opens a few hours a day during the summer to meet the double requirement for participation in the program schoolyards and one of the 200 centers of the Refugis Climàtics network, activated by Barcelona City Council to combat the heatwave. It will only be open three hours a day (from 11:00 a.m. to 2:00 p.m.) this August. On Monday there were two children, on Tuesday none and yesterday 14 who loved playing with the shower planted on the terrace to cool off.

“Not everyone knows that. The few who know about the service are parents of P-3s. As a monitor, I’m bored,” says this young man of Dominican origin and former student with a resigned smile and emphasizes: “It wasn’t there when I was little. We died from the heat.” In the afternoon, contrary to what happened in July, the school remains closed. Jacob Marín, 32, salesman for ONCE, who works right in front of the Cervantes, emphasizes: “I don’t see many people who go to school for acclimatization.” This case is no exception. The network of shelters, established in 2019, consists of 202 centers, but many are closed in mid-August or have restricted opening hours. Or the neighbors simply don’t know it exists because the information they have not achieved.

The Esquerra community group has taken stock and believes the plan is a “burning plant.” Republicans assure that of the 202 centers, including libraries, clubs or outdoor parks, only 67 are fully open; 61 partially and 74 closed. “Many of these shelters don’t work during the hours of sunshine,” lamented Marx Zañartu, Mayor of ERC, in a statement.

“Isn’t the library open?” Oh! We came to get our membership card,” explains a young Pakistani with an envelope under his arm, accompanied by his wife, in front of the Sant Pau y Santa Creu library on Calle Carme. A large sign announces that it will be closed from August 1st to 15th. The Refugi climate logo can be seen behind the fence. Of the 29 libraries in Barcelona, ​​only one is open for each of the 10 districts and four more will be open from the 15th. In Ciutat Vella only the Bonnemaison is available and from the first hour there is already a queue of users. There is no trace of the Refugi Climàtic plaques. “But when people calm down and drink water,” says one employee.

The city’s ERC group has denounced that out of a total of 202 centers, 67 are fully open; 61 partially and 74 closed

The City Council has promoted the idea that all Barcelonans can have a center, with climatic comfort, accessible, recommended for people more sensitive to heat, such as grandparents, babies or people with respiratory problems, 10 minutes from home. But many go unnoticed: there are still public spaces with air conditioning or parks. “Advertisements were made, but very few people came. Just two ladies who had a relative at the Hospital del Mar and a boy with WiFi,” says Rosa Jordar, 57, who works at the environmental education center La Fábrica del Sol in La Barceloneta, and looks spellbound at a young man with his mobile phone. They close at 3pm and for the fortnight in the middle of the month they have the blinds down but they will answer if anyone calls. That won’t happen at the La Sedeta Civic Center in Gràcia: a sign with a photo of some feet in a pool warns that it will be closed throughout August.

Determined, an employee of a bar in a center for the Great Ghent, which can only serve its affordable drinks to the elderly, opens a cupboard and shows a sturdy plastic cup. It wrote these phrases: “Drink water, cool off, protect yourself from the sun or put on your hat. “If someone comes in, we can only give them tap water and in these glasses,” he laments. And he adds: “That doesn’t make any sense. Nobody knows it exists. More or less the same old grandparents come.” Cristina Sierra, 60, and Yosra Daqui, 20, will open the Casal de Barri Congrés-Indians in Sant Andreu at 4 p.m. and their vision is more optimistic. Today a handicraft activity with recycled materials is planned for the twenty grandparents who, when the temperature is good, will read or play cards, often accompanied by their grandchildren. That yes: only in the afternoon. “Years ago it opened in the morning and hardly anyone came,” Sierra admits.

Advertisements were made, but very few people came,” says a community worker

Where there is no need to place posters is the Parc de la Espanya Industrial, in whose pond adults, children and dogs alike bathed yesterday. “I live nearby and it’s very good. It’s much better than Ciutadella,” says Lucía Domínguez, 30, accompanied by her dog More. After the basketball game, Matías Vierna, 26, and Arandú Bazam, 22, bathed at 35 degrees for the first time. “The water smells of chlorine,” they said as they dried off. It wasn’t long before Ascensión Novas, Cervantes’ monitor, continued his day at the Institut Vives in Sants. It is not a climate center. Dozens of boys gather there to play soccer.

Previous articleGermany must save more gas than other EU countries
Next articleBarbara Meier: Shortly before giving birth – she enjoys the “last vacation for three”