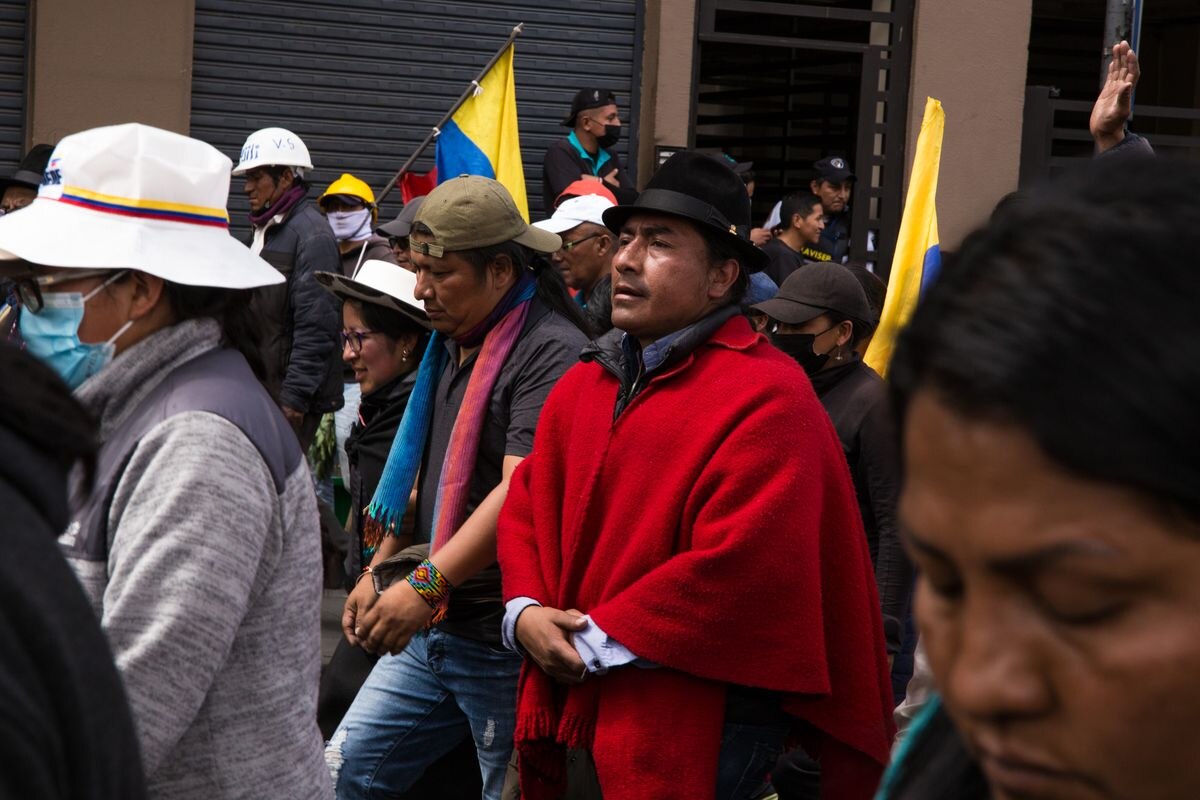 Far from bringing social demands to the negotiating table, Leonidas Iza is betting on more days of protests in the streets of Quito. The indigenous leader, who is defying demonstrations in Ecuador for a week and a half, has rejected the government’s invitation to dialogue, instead setting new conditions. For the President of the Confederation of Indigenous Nationalities to agree to a meeting in the same room with Ecuadorian President Guillermo Lasso, he must lift the state of emergency decreed over the weekend and order the withdrawal of the police and military guarding key sentries from the capital.

In parallel with these conditions and the pushing and pulling of the two political leaders, the concentrations have escalated the tone of the violence. In the historic center of Quito there are already two dead and open field battles. “We come to solve problems, but the state welcomes us with violence,” Iza announced Wednesday in one of her multiple live broadcasts through the networks. Unlike the previous days, when he occasionally appeared at the beginning or end of the day, the tribal leader joined his people in the marches and was met with proclamations and speeches of resistance.

The night before, he had refused to end the national paralysis despite receiving 10 proposals from the government, most of which delivered on his 10 demands. The refusal to speak was poorly received in the Lasso administration. “Two parties are needed for dialogue and we are ready for this,” said the government minister in response. “But it cannot be conditional or hijacking an entire country nor a whole government,” Francisco Jiménez made it clear in the early hours of the morning that Iza was dedicated to consolidating his image as a convener of large crowds.

Wednesday afternoon’s colorful and peaceful march through downtown Quito contrasted with the nightly clashes of previous days. In recent days of protests, sticks and stones have been flown at police officers, and tear gas has been used against protesters. A young man died in the city of Puyo, in the Amazon province, with a head injury that participants in the appeal attributed to the impact of a tear gas bomb fired by police and Interior Minister Patricio Carrillo, an incident caused by the protesters themselves using homemade explosives.

Despite Leonidas Iza’s initial reluctance to address the proposals for rapprochement transmitted by the Presidential Palace of Carondelet, the Confederation of Indigenous Nationalities replied in writing to the government. A letter was posted on Twitter, signed by Iza and four other community leaders, which the government minister said he had received to start an “effective” dialogue, in a gesture as if to show that if negotiations did come, negotiations were due should go to the assessment officer.

The very document made the executive ugly after months of frustrated talks in which indigenous representatives had raised their social demands due to the economic hardships sweeping families in rural Ecuador, but which have never been addressed. They will only sit around a table, according to the document, if there are “guarantees” that government proposals will be met and if negotiating items deemed “unworkable” are not curtailed.

- Advertisement -
Share
Facebook
Twitter
Pinterest
WhatsApp
Previous articleFrance and Germany are slowing growth after losing momentum due to post-Covid reopening, according to PMI
Next articleTelefónica and NTT Data collaborate with Cie Automotive to integrate 5G into intralogistics management