The moment of solar energy 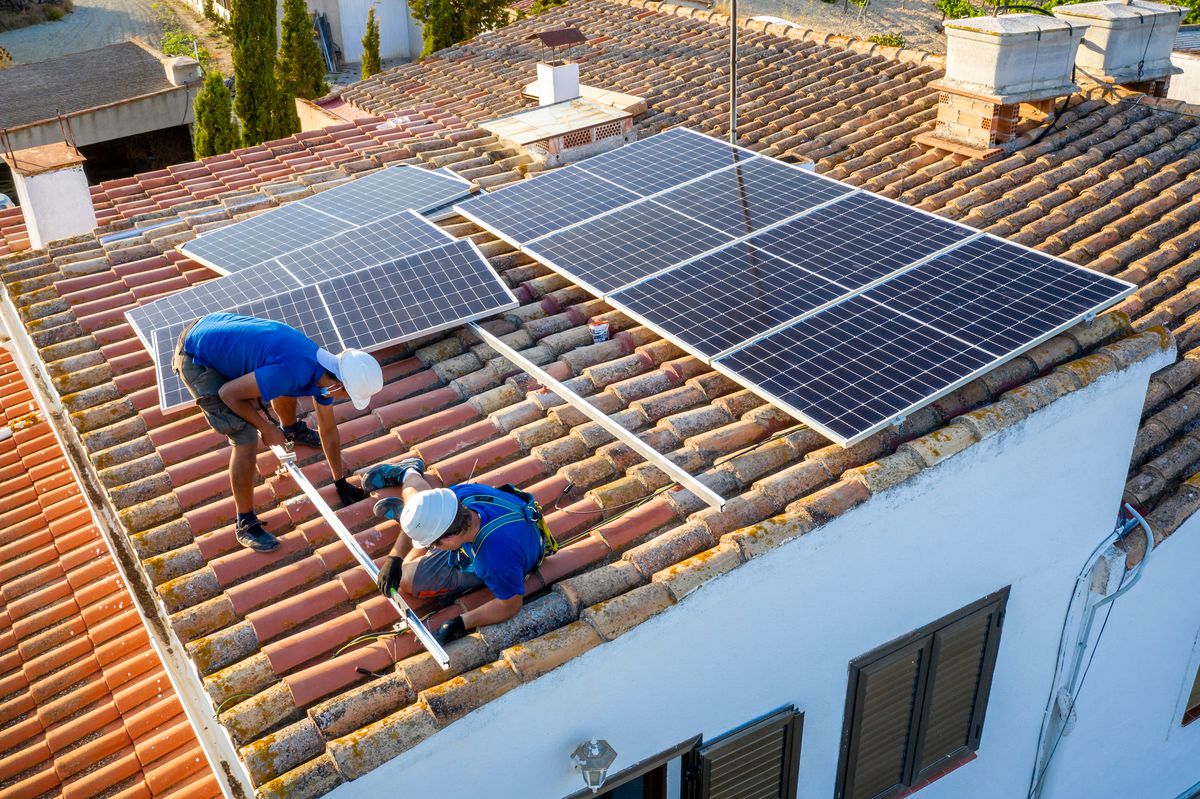 Photovoltaic self-sufficiency is flourishing. According to data from the Spanish Photovoltaic Union (UNEF), the installed capacity on Spanish roofs doubled in 2021 from 527 MW to 1,203 MW. The energy crisis – in March the megawatt hour (MWh) cost 550 euros, the Iberian energy market operator estimated, ten times more than a year earlier -, the urgent need to fight climate change – which includes reducing dependence on fossil fuels – and the continuous technological improvement of solar panels are the factors that explain their boom.

In addition, today there is the thrust of the European Next Generation EU funds, which drive and promote the energy transition towards a decarbonized economy Consider 660 million euros, expandable to 1,320 million euros, to help individuals and businesses who want to apply this clean supply. José Donoso, President of UNEF, affirms that the aid will underpin the launch of this alternative: “The demonstration effect is extremely important. If you see your neighbor has it and it works for them, you will want it too. It is the way to break inertia”. In Spain, one of the countries with the most hours of sunshine in Europe, these funds will support more than 300,000 new projects, according to UNEF forecasts.

Essentially, a photovoltaic panel absorbs the sun’s rays and converts them into electricity. Íñigo Amoribieta, Managing Director of the installation company Otovo for Spain, Portugal, Great Britain and Ireland, describes a typical installation: “For a single-family house with a consumption of around 6,000 KW/h per year, we would need around ten photovoltaic modules that generate a peak output of four MW and would take up an area of ​​about 20 square meters”. Its price, adds Amoribieta, would be around 5,000 to 6,000 euros. If you supplement it with a battery that enables energy to be stored for later use, the purchase price almost doubles.

If we continue with this example, the estimated savings in consumption and consequently in energy bills can range from 30% to 50% with a simple installation and up to 80% if the battery mentioned above is added. “The ideal is to request a quote from an installation company that, based on technical aspects such as the space available, the orientation of the installation and the consumption profile of the house, will draw up a project proposal that includes an installed power as a percentage of self-consumption and the recommended modality for use of the surplus,” explains José Donoso.

Using surpluses, which Donoso cites, is another source of savings. Juli Paya, commercial director of the installation company Engel Solar, explains that this system allows excess energy, the surplus energy, to be transferred to the electricity grid and then to receive compensation for what the consumer pays to the distributors when their disks are inactive. and you have to fall back on the traditional network. “In other words, on top of the reduced expenses, there’s an allowance that’s deducted from the electricity bill each month that could mean additional savings of up to 30%.” And he points out: “We have to keep in mind that the price the surplus cannot exceed the price of the energy we consume. The energy produced can at most be compensated with the energy consumed and the balance could be left at zero.”

Grants of up to 50% on installation

In addition to the savings on the photovoltaic bill itself, the Next Generation EU subsidy subsidizes a good part of the installation sum. UNEF’s José Donoso explains that the amount depends on the program requested, but outlines a general case: “In a condominium of less than 10 kWp (kilowatt peak, the maximum power produced by a solar panel) without battery storage, the aid would be EUR 600/ achieve kWp. If the plant is located in a municipality with fewer than 5,000 inhabitants, the EUR 600/kWp includes an additional subsidy of EUR 55/kWp”.

Going back to the initial example, a single-family house with ten photovoltaic modules, a peak generation of four MW and costs of around 5,000 to 6,000 euros, the subsidy would amount to 2,400 euros.

There are also other complementary grants to these European subsidies. One of them is the income tax deduction. “Up to 20% of the investment in the photovoltaic system can be repaid on request in the profit and loss account. To do this, you must own the property and prove that the project has been carried out by a specialized and authorized company,” adds Paya. Other deductible taxes are Property Tax (IBI) and Building, Equipment and Works Tax (ICIO). And certain autonomous communities also offer their own assistance for solar self-consumption projects.

UNEF’s José Donoso warns that the applications in some parts of the country have quadrupled the existing budget: “It is important that the projects are awarded so that the industry is not slowed down.” “And we have to keep in mind that this is a limited aid given on a first-come-first-served basis, so at this time there is no guarantee that 100% of applicants will be able to benefit from this package. The demand for solar systems is very high and resources are limited,” Juli Paya continues.

In order to speed up the process and completion of projects as much as possible, installation companies such as Engel Solar or Otovo also act as intermediaries, guiding and supporting the consumer in applying for subsidies. models are common key at handin which the installer takes over the bureaucratic processes of the photovoltaic system, including its legalization and registration, and the delivery ready for operation.

These services are combined with other financial type. Carmen Urraca, Director of European Funds at Banco Sabadell, reiterates that energy costs are a topic of great interest and topicality: “This is why self-consumption is a great opportunity for citizens”. The company offers personalized financing solutions for these photovoltaic projects. “The goal is to accompany the customer from start to finish,” he adds. The company has a network of area offices and managers Providing information and clarifying doubts about European funds Next Generation EU.

Aid for the ecological transition available

For own consumption and storage possibilities

One of the most important items of the energy transition, 660 million euros, expandable to 1,320 million depending on needs, is used for the promotion of plants Self-consumption with renewable sources. Three actions stand out within the plan: subsidies for self-consumption of electricity (with a minimum of 20% of the budget and a higher amount for municipalities with a demographic challenge and the self-employed); Self-consumption of thermal renewable energy (with support for SMEs between 40% and 45%); and biomass boilers (with a subsidy ranging from 550 euros to 13,500 euros per household depending on the technology used).

For the purchase of vehicles with sustainable drives (MOVEMENTS)

€400 million plan (expandable to 800 by 2023) to support the purchase of electric, plug-in hybrid and hydrogen fuel cell vehicles, as well as support urban charging infrastructure.

The aid finances the purchase of vehicles and private charging systems (MOVEMENTSIII), the acquisition of vehicle fleets (MOVE FLEET), good practices in mobility (SINGLE MOVEMENTS) or the change of heavy transport vehicles managed by the autonomous communities with a budget from the Ministry of Transport, Mobility and Urban Development. In general, the larger the number of vehicles, the larger the subsidy.

Aid of 50 million euros for energy rehabilitation such as improving the thermal envelope of buildings, the energy efficiency of thermal installations or lighting systems. Funding can exceed 60% of the budget. Additional assistance will be considered for vulnerable groups.

To speed up the Sustainable urban development (DUS), this program received nearly a thousand requests from local entities in communities facing demographic challenges in just one week, prompting the Department of Ecological Transition and Demographic Challenge to increase the budget from 75 million to 325 million. The plan finances renewable electricity and heat generation systems, improvements to the thermal envelope of municipal buildings, electromobility or demand management systems. The subsidy starts at 85% and can reach 100% of the investment.

Around EUR 100 million will be made available from the EU fund Next Generation for the creation of energy communities and divided into three programmes: CE-Learn, CE-Plan and CE implementation. The goal is to facilitate the creation of these communities from the ground up, a process supported by the network of Community Transformation Offices.

For energy efficiency in industry and agriculture

These grants aim to reduce energy consumption in companies industrial Y agricultural. In addition to SMEs, beneficiaries include irrigation communities, owners of irrigated farms or agricultural associations. The average grant is 30% of the investment.

Businesses and freelancers must turn to the autonomous communities to request help since they are the ones who administer the programs.