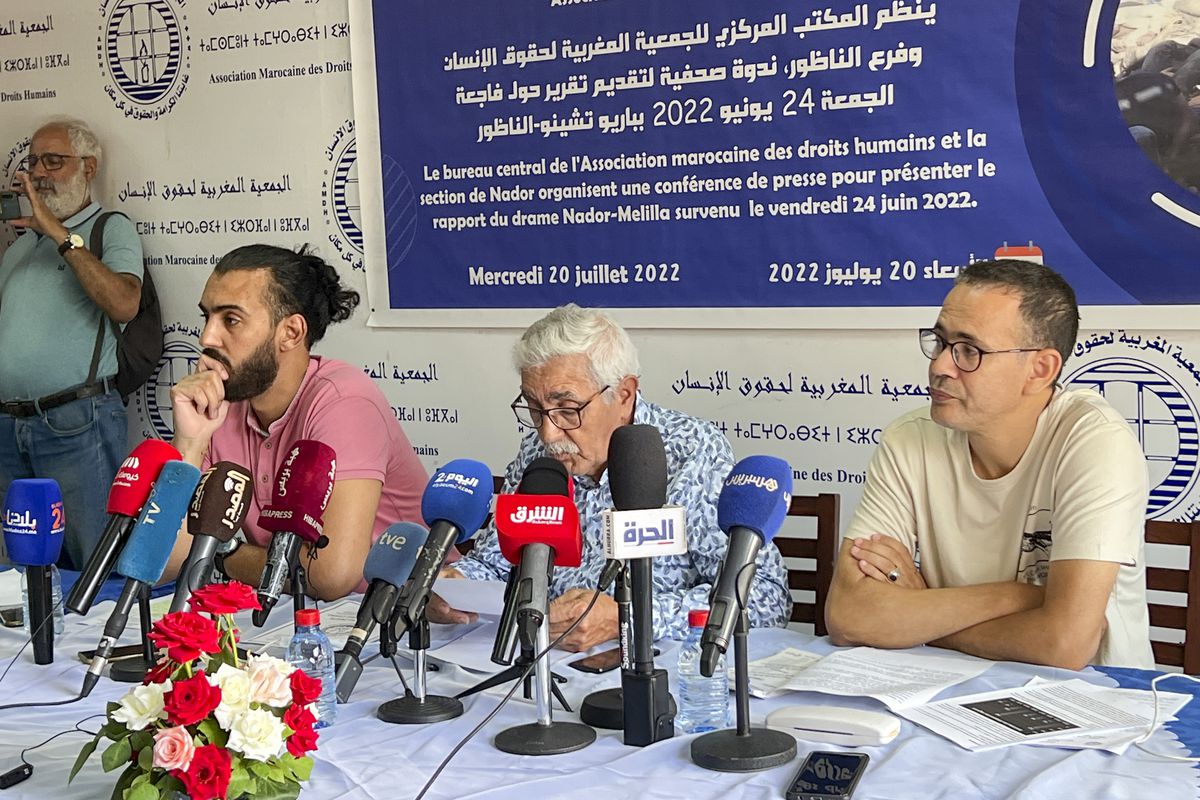 The main NGO in Morocco, the Moroccan Association for Human Rights (AMDH), points to the violence used by the Moroccan security forces and the collaboration of Spanish agents as the main cause of the deaths of more than twenty people on June 24 in Nador, on the border to Melilla. The Moroccan Ministry of the Interior puts the death toll at 23, while the representatives of the AMDH assumed 27 dead when presenting their report on the events at the border post in Rabat this Wednesday.

Omar Nayi, a member of this NGO in Nador, assured that the source his organization is relying on to encrypt the deceased has proven solvent: “When the authorities said that there were only five dead, we already said that there were 27 were. Later they increased the number to 18 and finally to 23. But we always spoke of 27 dead.”

Nayib also said that as of July 15, his organization had counted up to 64 missing people, mostly migrants from Sudan and South Sudan, who were involved in attempting to cross the border irregularly. Their family and friends have lost touch with them since that day.

The AMDH attributes six serious decisions to the Moroccan authorities. The first is that they have been “attacking” the migrant and refugee camps on the outskirts of Nador almost daily. The organization combines these operations with the normalization of relations between Spain and Morocco. This new phase came after 47 years of historic change in Spanish policy towards Western Sahara by President Pedro Sánchez.

The second “serious” decision, according to AMDH, is not to disperse the 1,500 migrants who left the Izenoudene forest near Gurugú on June 24 along the six kilometers that separated them from the border. The third is to concentrate 2,000 agents at the Nador fence and prevent the emigrants from retreating to Mount Gurugú. The fourth is the “excessive” use of tear gas in a “confined and almost closed” location. The fifth is to have transported the dead in civil defense ambulances while the injured “lay on the ground for hours without assistance”. And the sixth also concerns the Spanish armed forces. The NGO wonders why neither the Moroccan nor the Spanish authorities have helped the local people who “died before their eyes”.

The AMDH concludes that this “unprecedented” record of deaths at the border can only be explained by the role of “gendarme” that Morocco plays for Spain and the European Union, especially after the normalization of relations between the two countries .

EL PAÍS reconstructs the final and deadly attempt of a group of young Africans to reach Spain using geolocated testimonies, images and videos

The NGO criticizes that the Moroccan authorities mobilized up to nine buses “faster than ambulances and emergency vehicles” to transfer hundreds of migrants to cities in the center and south of the country that are far from the border. She adds that as of 4 p.m. on June 24, nearly 500 asylum seekers, “among them many wounded,” were being transferred to different regions of the country. And he assures that at least one of the wounded, Abdenacer Mohamed Ahmed, died on the bus that transported him, according to various testimonies.

The report underscores that violent clashes with police erupted in the five days leading up to an attempt to cross the fence, injuring dozens. Nayi said the agents arrested migrants and refugees, as well as members of the security forces. “Eventually there were negotiations between them and each released their prisoners.”

According to the NGO, the agents used a food blockade on the emigrants and the use of tear gas in the field for the first time. “The traders near the camps were even asked not to sell anything to the emigrants,” says the report.

These gestures of “cruelty,” according to the organization, marked the days before the attempted attack on the fence: “In these inhumane conditions, after several days of attacks and confrontations, exhausted, persecuted, malnourished, due to the destruction of the little ones food that they had, about 1,500 migrants made their way to the Melilla fence on June 24.”

At 8 a.m., the group, who had already taken refuge on Mount Gurugú, made their six-kilometer journey towards the border with Melilla without anyone blocking their access, the NGO said. “Asylum seekers,” the report said, “arrived at the Chinatown border post at 9:00 a.m. and attempted to open the main gate and scale the fence, with no panic or avalanche scene recorded so far.”

The most common cause of death

The AMDH claims that the Moroccan authorities allowed the group to approach the border post to take advantage of the terrain at that point near the fence. “So, [las autoridades marroquíes] could show the Spanish partner how far they would be willing to go to stop the migration flows if you are a member”. The NGO points out that the “main cause” of the deaths was due to the Moroccan authorities’ decision to “violently attack the asylum seekers when they reached the fence and were already without sticks and stones”.

Omar Nayib reported that many of the migrants were carrying backpacks loaded with stones, they were also armed with sticks and some of them were carrying small knives. But he stressed that no one stopped them from approaching the fence and that “there were no clashes.” However, a few minutes later, Moroccan authorities began throwing stones and tear gas, according to the NGO. “At that moment, the first casualties occurred and several asylum seekers fell to the ground, either suffocated or hit by stones.”

The NGO says it has 20 video recordings, only a portion of which it claims to have released, acknowledging the “cruel, inhuman and degrading treatment” Moroccan agents have had towards asylum-seekers. The AMDH does not shy away from criticizing the Guardia Civil either: “Certain video clips show beyond any doubt that the Spanish police and the Guardia Civil used tear gas and rubber bullets against asylum seekers when they were still trapped on the Moroccan side in the entrance passage of Chinatown”.

The NGO claims that Spanish security forces “hot” turned back 100 asylum seekers who had already entered Spanish territory, a figure that Spanish police sources put at 102.

Also on July 13, an official body, the National Human Rights Council (CNDH) of Morocco, presented the preliminary findings of its June 24 investigation. This institution, whose President Amina Bouayach was elected by King Mohamed VI in 2018. has nothing to do with the AMDH. While the NGO is very critical of government human rights policies, the CNDH is responsible for making recommendations to the Moroccan government and is very careful not to criticize the country’s security forces. It is therefore not surprising that the conclusions they drew on the deaths of June 24 are very different. The NGO report is much more critical of the Moroccan authorities. But both agree that the role played by the Spanish security forces is not unrelated to the tragedy that happened at the border that day. While the CNDH accused the Spanish authorities of failing to help the Sudanese migrants, the AMDH adds that the Moroccan armed forces gave the asylum seekers no means of escape.