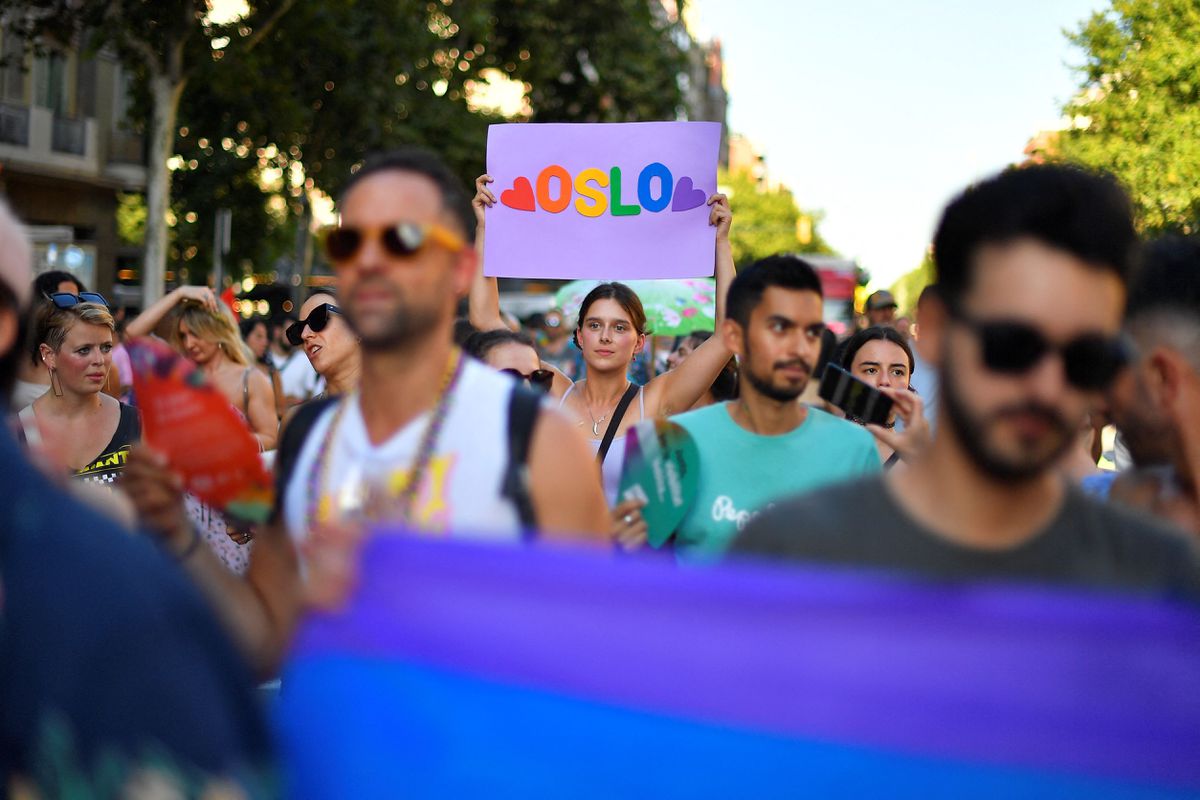 A radicalized man was involved in shootings at a gay pub in Oslo. An animated film depicting a lesbian kiss has been banned by dozens of countries, while some theaters warned the film contained a “gender ideology”. Hate crimes against the LGTBI collective have increased by 34% in Catalonia. In Florida, the law was passed don’t say gay, which bans speaking about sexual identity in schools. “They try to curtail our rights with hate speech against the entire LGTBIQ+ collective, but also against women or migrants,” says Uge San Gil, President of FELGTBIQ+, the Spanish state association. “So we have to take to the streets and demand our rights so they can’t take away our progress,” he continues.

Since the approval of equal marriage in Spain in 2005 during the government of José Luis Rodríguez Zapatero, tolerance towards the group has only increased. In 2011, Spain was ranked second in Rainbow Europe (the annual index compiled by the organisation ILGA Europe elaborates and classifies the legal and socio-political situation of LGTBI people in 49 European countries). However, in the last rankingpublished in may Spain has dropped to 10th place, the second decline in a row. “Hate speech has been sweeping Europe for two decades,” argues the President of FELGTBIQ+. The organization believes that “comprehensive and state legislation that levels up rights” could improve Spain’s score. So the government of Pedro Sánchez agreed to the congress on the eve of Pride Day and sent it Law to achieve actual and effective equality for trans people and guarantee the rights of LGTBI people. Despite these advances, “an extreme right with power, economic resources and reactionary positions has consolidated in recent years, since 2012,” San Gil warns.

Although Madrid’s pride is recognized around the world, this year the rainbow flag will not fly at City Hall. International LGTBI Day is celebrated on June 28th and cities organize their protest marches around this date. Some, like Mexico City, Barcelona, ​​​​​​New York or São Paulo have already done so; Madrid celebrates between July 1st and 10th. The rainbow flag was only flown in Cibeles between 2015 and 2019, when Madrid was governed by the left, with Mayor Manuela Carmena at the helm. The flag was also raised in Cibeles at the first Pride of current Councilor José Luis Martínez-Almeida (PP). A gesture that did not please the extreme right of Vox, which was key in getting the mayor to invest. It hasn’t recurred.

“It’s a reaction to the years of progress,” summarizes Eduardo Rubiño, deputy in the Madrid Assembly for Más Madrid and activist. It inscribes the threats in an international phenomenon with ramifications in Latin America, the United States or Europe. “It is related to a far-right agenda that wants to go backwards in terms of equality and diversity. In Spain, this can be seen in some political parties who seem to want a return of homophobia and LGT biphobia,” adds the Madrid politician.

“We ask the city council [de Madrid] hang up the flag,” demands the President of FELGTBIQ+. She herself made this request during the Madrid Pride presentation, where she also stated that “[Almeida] He’s not everyone’s mayor.” For their part, some city opposition parties have denounced some degree of city obstruction in organizing the event. “These are attitudes that jeopardize the Pride celebrations,” San Gil lamented. “But not the justification,” he adds The state demonstration will be convened on July 9th in Madrid under the motto “Against Hate: Visibility, Pride and Resilience”.

A breach of tolerance was also noted in the Netherlands, a pioneer in granting rights to the group: in 2022, the acceptance of the LGTBIQ+ group will stagnate. This is the first time in 15 years, according to a study by the Office for Social and Cultural Planning, an agency of the Dutch government. “Adoption data has been rising for years, now it’s stagnating and even trending down. We must not allow setbacks in the emancipation of LGTBI people,” criticizes Astrid Oosenbrug, President of COC Nederland, a reference association for the group in the Netherlands. “It’s worrying,” he adds.

EU country Most hostile to sexual minorities is Poland, according to Rainbow Europe. It has been governed by the ultra-conservative PiS party since 2005. Nonetheless, Warsaw celebrated its pride on June 25 with the support of the capital’s City Council, commanded by the liberal Rafal Trzaskowski, and with the visit of EU Commissioner for Gender Equality, Helena Dalli. A delegation from Ukraine also attended the meeting: “If we want LGTBI rights to be exercised, the war must stop,” demanded Lenny Emson, CEO of kyiv Pride. Emson also warned that the conflict has made life even harder for members of the group in her country.

“In times of upheaval, minorities are more exposed. It’s the perfect time for them to use us as their scapegoat again,” says politician, actress and activist Carla Antonelli, who has been fighting for collective rights since the late 1970s. “If you had told me 40 years ago that we would come this far, I would not have believed it,” he says. “If they had told me that a reactionary movement would question them after obtaining and enforcing the rights; I wouldn’t have believed it either. It’s amazing,” concludes Antonelli.

As an example of this “reactionary wave,” the activist cites the recent decision by the United States Supreme Court, which nullified abortion rights protections introduced in the country in 1973 and opened the door for states to ban the exercise. One of the conservative Supreme Court Justices, Clerence Thomas, has opened the door to “reconsider” other cases, notably same-sex marriage or birth control methods. “It’s a macho reaction against the idea that we all live equally,” summarizes the President of FELGTBIQ+. “Patriarchy disrupts and violates equality because it does not want to give up power and privilege. They are being threatened,” San Gil continues.

“When there is a backlash in a social right, history has shown us that it usually has a domino effect,” warns Olympe Abogados, a law firm founded by Rocío Moya and Isaac Guijarro that specializes in LGTBI law and sexist violence, among other things has specialized . Like women’s rights – and unlike men’s – the achievements of the LGTBI community appear to be elastic: there are times of progress, but they can also experience setbacks. “It seems that the rights conquered are forever, but now we have seen that it is not always true,” says Más Madrid’s Rubiño: “We must defend these conquests so as not to suffer setbacks.”

“Social rights are transversal: those who are against feminism and abortion are also against LGTBI rights. They don’t keep calm by picking one up, they go for the whole package,” say Olympe’s lawyers. And they add: “They want to eliminate all of the populist far right – and sometimes the traditional right – that they define themselves as ideological lawsa term they use to give the impression that they are not talking about limiting a group’s human rights.”

“The less normative you are, the more you are discriminated against,” summarizes the law firm Olympe Abogados. In other words, a lesbian, black, and migrant woman would be a victim of quadruple discrimination. But the reality is that in asylum and refugee processes, the LGTBIQ+ reality is usually not considered: “In the eyes of the government on duty, they are migrants first and LGTBI second. It completely affects her treatment,” the attorneys explain.

The reality of the migrants who belong to the group has aroused interest. In their protests this year, Critical Pride – which will be celebrated in Madrid on June 28 and presented as a contrast to the official event, which they consider “commercialized” – has focused its claims on the reality of LGBTI migrants. “Without papers there is no pride. Let the limits of the racist system burn!” is the motto they chose for their demonstration. In addition, the coordinator of the movement has joined the campaign Regularization now!, which calls for the implementation of a popular legislative initiative to carry out a massive regularization of migrants residing in Spain; or the repeal of the immigration law. “We are fed up with this racist and cishetero system that excludes, persecutes, tortures, imprisons and deports,” they affirm in their manifesto.