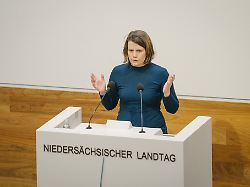 Hamelin (dpa/lni) – The leader of the Greens parliamentary group, Julia Willie Hamburg, has been elected to the top of her party’s list for the upcoming state elections in Lower Saxony. On Friday night, she obtained 194 votes in favor and 17 abstentions, which, according to party information, translates into an approval of 91.94 percent.

There were no opposition candidates for the first place on the list. According to this, the delegates voted online, after which the vote by mail must be confirmed before April 21. The top ten places on the list will be chosen on Friday.

In his speech, Hamburg emphasized that the party wants to be part of the next state government. The Greens are in opposition in the current legislative period, and a new state parliament will be elected in Lower Saxony on October 9.

In view of the war in Ukraine, the 35-year-old insisted on the need for an energy transition. “In the end, it’s the sun and the wind that don’t carry us.” Gas heaters would soon be seen in museums and no longer in homes. With his party he wants to announce a decade of investments.

The Greens currently have twelve members of the state parliament. The Greens achieved their best result in a state election in Lower Saxony in 2013 with 13.7 percent. Group leader Hamburg and former Agriculture Minister Christian Meyer have already been featured as the leading duo for the election.

Previous articleSarah Al-Amiri is on TIME’s list of the 100 most influential people in the world
Next articleBiden sets an example on NATO’s eastern flank: Moscow reinforces troops