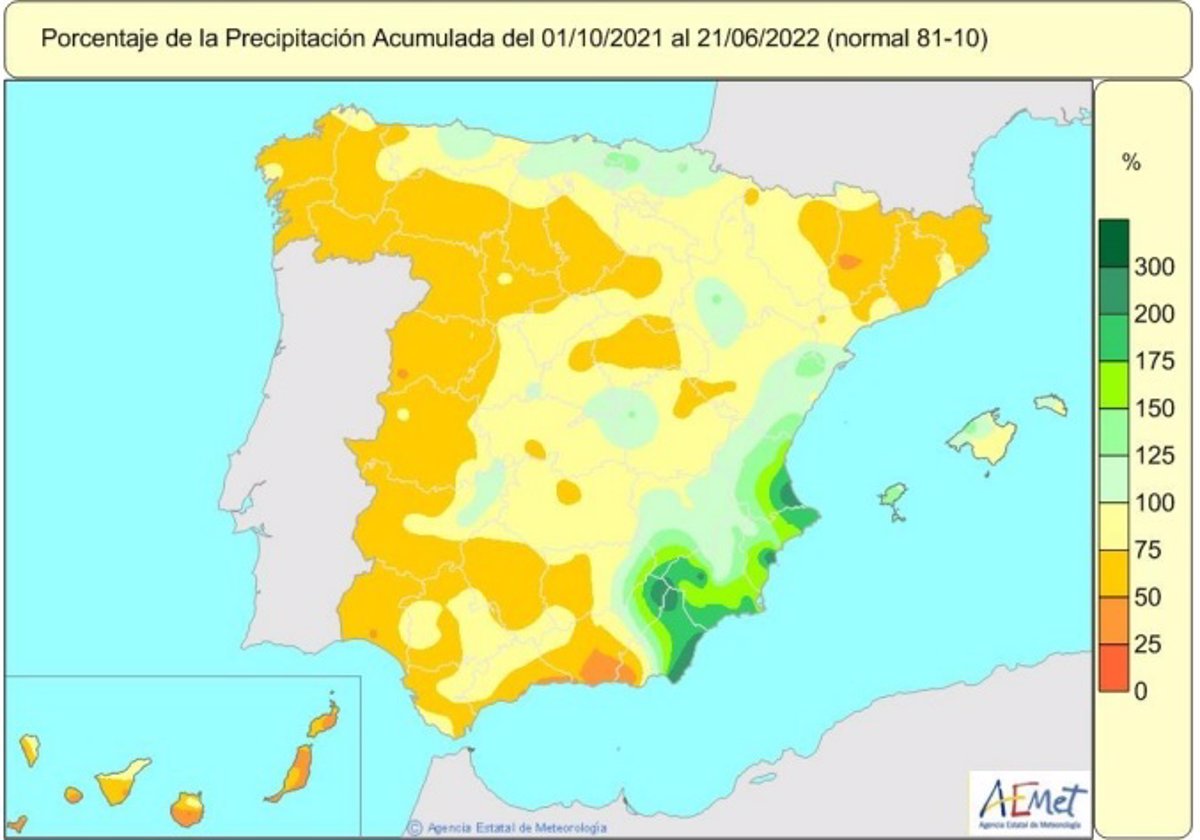 The lack of cumulative precipitation in the hydrological year that began October 1, 2021 through June 21 continues to increase and is 26 percent below normal.

In addition, it shows that between June 15 and June 21, the rains affected most of the peninsula, except for the south-west quadrant, the westernmost Canary Islands together with the island of Gran Canaria and the island of Mallorca.

In terms of quantities, it shows that 10 liters per square meter were exceeded on the Cantabrian coast and along the Pyrenees, throughout Galicia and in more remote areas of the Iberian system, Levant and north of Jaén.

Likewise, in the province of La Coruña, in the western half of Asturias and at times in the Picos de Europa and the Pyrenees of Lleida, the 40 liters of accumulated rainfall were exceeded.

In addition to the rainfall recorded in the current water balance, it rained on the 22nd in the western half of the peninsula and in the easternmost part of Catalonia.

Area-wise, it has seen below-average rainfall across much of the peninsula along with the Canary Archipelago, highlighting the western third of the peninsula, western half and southern coast of Andalusia, Catalonia, Guadalajara Province and the Canary Islands where the rainfall deficit exceeds 25 percent.

However, they exceed normal levels of rainfall in a strip of the Cantabrian coast that stretches from the eastern half of Asturias to Navarre, in the southern half of Aragon, in an area that includes the south-eastern half of Madrid and part of the provinces of Toledo and Cuenca, in the province of Albacete, northeast of Badajoz, in the north of the island

Mallorca, in the Pitiusas and especially in the East, ranging from Almería and Granada to the Ebro Valley, with areas between Almería, Murcia and Granada, and points on the coast of Valencia and Alicante where rainfall doubles the average values ​​​​of the reference period 1981- 2010

- Advertisement -
Share
Facebook
Twitter
Pinterest
WhatsApp
Previous articleColombian influencer accused of wanting to eat for free at Mexican restaurant tells critics she enjoys ‘gossip’ as she has gained more followers
Next articleShe ran away from home and survived on $25: It was J.Lo’s hard life before fame