The Island review: This nautical panel is so much fun, it’s a disaster 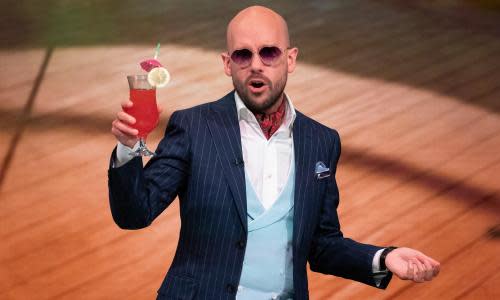 If the mark of a great TV series is bad copycats, Taskmaster is starting to look like a classic. Bring the panel show to life by having comedians tackle short-lived challenges instead of just taking a quiz, he said. Easy! But if The Island (Dave) is any indication, re-bottling Taskmaster’s magic is much more difficult.

Warning horns sound immediately as host Tom Allen opens the proceedings by getting bogged down in explaining the concept. Four comedians are on an imaginary cruise ship that has gone around. Four uninhabited islands are within reach. Each comedian must found a new society, shaping every element of his imaginary way of life, hoping to persuade as many imaginary passengers as possible to become citizens.

First, the comedians, Ninia Benjamin, Ahir Shah, Sara Pascoe, and Johnny Vegas, must name their island. What’s a funny name for an island that isn’t real and, at the moment, has no features? Well, there isn’t one. Pascoe calls his “Magic Island”, which leads to a strange fact that the place is full of wizards. Las Vegas opts for “Sale Now At,” on the grounds that cruise ship passengers tend to be older people who are congenitally unable to resist a bargain; At least that’s a joke, but not a good one. Benjamin barely tries “St Benjamaninia”, while Shah chooses “Poyais”, because this was the name of an island invented by a 19th century con man, which is less of a joke and more of a relevant fact.

The second round asks the comedians to nominate a celebrity to be their chief of police. As the names come up: Sean Bean! Mystical Meg! Greg Wallace! Ricky Grover, the excellent but not so well known comic actor! – any hope that someone has thought of a funny reason to say them is dashed, and the fatal flaw of the setup is confirmed. The island is so hazy and artificial that it asks participants to conjure up laughter out of nowhere. It’s crypto comedy. People who are funny for a living can’t do it.

With so many shows now involving three, four, or possibly five comedians thinking about things or completing tasks, there is a hierarchy that, in theory, decides where such shows are available. The best ideas go to terrestrial TV, with satellite channels just below. Further down the food chain are Radio 4 series, followed by overly long podcasts you reluctantly subscribe to after watching them on Apple’s home page a hundred times, followed at the bottom by behind-the-wall podcasts. payment that non-subscribers never hear about.

Being in Dave, Taskmaster’s original home before his big money move to Channel 4, puts The Island on tier two, but it should rightly be there kicking off with the podcast hordes. In fact, it was co-created by James Acaster and Ed Gamble, the hosts of Off Menu, a podcast where comedians talk about the food they enjoy. Acaster and Gamble probably should have realized that while that format invites revealing anecdotes about real life, to entertain guests in a new and relatable way, The Island… doesn’t.

This show is a filmed podcast. The only advantage for us of being able to watch the comedians, instead of half listening to them while we cook, go for a run or repair the bathroom caulking, is when they make clay busts of themselves, to be judged by Rich Miller. from The Great Pottery Throw Down. Miller makes some generic ceramic comments (“I love the material qualities that come through”), randomly assigns points, and then walks away.

Apart from that, the comedians spend the hour sitting around a table, saying things. Near the end, they play a simple parlor game, in which they have to think of famous people who have places in their names, suggesting that all the doodles on the brainstorming board have been used. Then we realize that, like Taskmaster, The Island will feature the same people every week. This is alarming: episode one has already accidentally included several shots of Pascoe smiling faintly as another of his buddy pranks topples over like a sherbet canoe. How weaver will she look in week five?

Allen perhaps deserves the greatest sympathy. He is a tireless professional in a crisis like this, capable of spraying the deadliest moments with sour camp. You feel like he might have a decent shot at the helm of a show where comedians name his favorite primes, if Audible hasn’t already commissioned him as a 43-part contestant hosted by Dara Ó Briain.

Allen provides the funniest moment of the episode, but when he then pretends that the sound of the ship’s horn is farting, it’s clear this ship is stuck. The island is beyond rescue.