The increase in the price of fuel continues rapidly 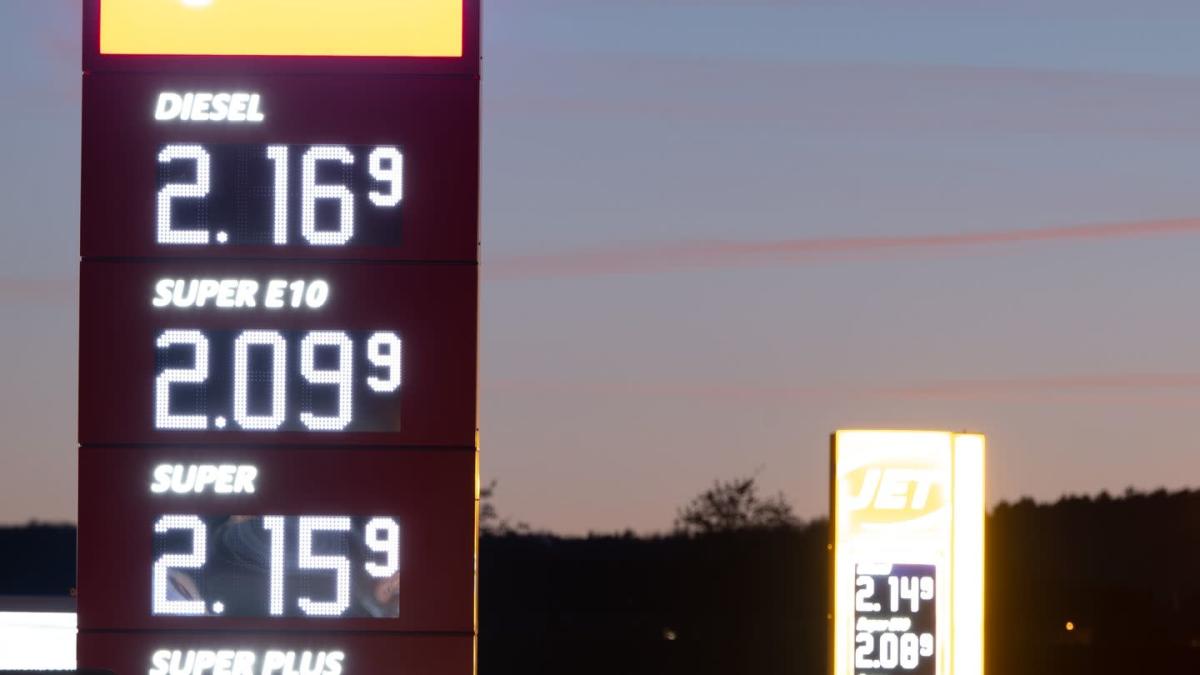 Munich (AP) – The war in Ukraine is pushing fuel prices to unprecedented levels. In just one week, diesel has become almost 40 cents more expensive, as announced by the ADAC on Wednesday. On a national daily average on Tuesday, fuel cost 2,150 euros a liter.

Super E10 increased 27.6 cents to 2,103 euros per week. And the next price jump was already evident on Wednesday. But what is driving prices, how do they stand in historical comparison, how much does the state benefit, and how are other countries dealing with the gas price shock?

How is the price of fuel made up?

A large part is taxes and duties: The tax on energy and mineral oils represents 65.45 cents per liter for premium gasoline and 47.07 cents for diesel. To this is added the VAT -currently 33.6 cents for Super E10 and 34.3 cents for diesel- and the CO2 tax, which -depending on the proportion of biofuel- adds another seven cents per liter to the books. In total, around 89 cents a liter currently goes to the state for diesel and almost 106 for E10.

The rest of the price -about 126 cents per liter of diesel and about 104 cents of gasoline- is explained, among other things, by the price of raw materials, refinery, transport and distribution costs, and the profits of the companies involved. . Product costs are likely to be the biggest item right now.

Does the state benefit from rising fuel prices?

The tax on energy or mineral oils and the price of CO2 remain constant, but the VAT increases with fuel prices. The current increase of 39.4 cents per liter of diesel in a week ensures that the state earns 6.3 cents more per liter of diesel sold. The rise of 27.6 cents in gasoline raises state VAT collection by 4.4 cents per liter. If you fill up less because of high fuel prices, the effect could wear off.

What drives the price of fuel?

The main drivers of the spike in the pump so far are oil prices, which have soared in the wake of the war in Ukraine and sanctions against Russia. The strength of the dollar amplifies the effect, as oil is traded in dollars and German buyers pay in euros. Added to this is the unusually strong demand for heating oil. Even before the Russian war against Ukraine, fuel prices in Germany had risen to record highs.

What is the price of fuel in a historical comparison?

The rise throughout the year is enormous: in March of last year, diesel cost 1,315 euros per liter and the Super E10 1,454 euros. And the old record values ​​of August and September 2012 have also left fuel prices far behind: at that time, the Super E10 had reached 1,709 and diesel at 1,554, long-standing highs. Since then, diesel has increased a good 38 percent and E10 a good 23 percent. This is significantly more than the general increase in consumer prices. According to the Federal Statistical Office, this was 14.4 percent from September 2012 to January 2022.

How difficult is it for drivers?

How’s the debate about driver relief?

Among other things, reductions in the value added tax and mineral oil taxes and additional improvements in the traveler’s subsidy are currently required. The latter was raised early as part of an aid package. Other countries have already taken clearer steps.

Heating oil or rapeseed oil from the supermarket costs around 1.50 euros per litre. Can you fill a diesel car with it?

That sounds tempting. But it is prohibited by tax law, and the ADAC also advises against it for technical reasons. Fuel oil in the tank reduces performance, causes the engine to knock hard, causes increased wear on the supply and injection pumps, and engine deposits. Older diesel engines with distributor injection pumps could run on vegetable oil, at least some of the time. However, the injection pump and injection nozzles of modern diesel cars are not designed for viscous vegetable oil: in the medium term, this will damage the engine and the fuel system.

Is it worth driving to Poland, the Czech Republic or Austria to refuel?

“If you live near the border, maybe even work in the neighboring country cheaper or drive there anyway for shopping or something similar, it’s definitely worth refueling there,” ADAC says. Travel costs and time expenditure should not be forgotten. According to the Federal Association of Medium-Sized Oil Companies, diesel and gasoline in Poland are 50 to 60 percent cheaper than in Germany because Poland has significantly reduced its fuel taxes. Gas stations in Mecklenburg-Western Pomerania, Brandenburg and Saxony have already given up or are about to give up due to the huge price difference.