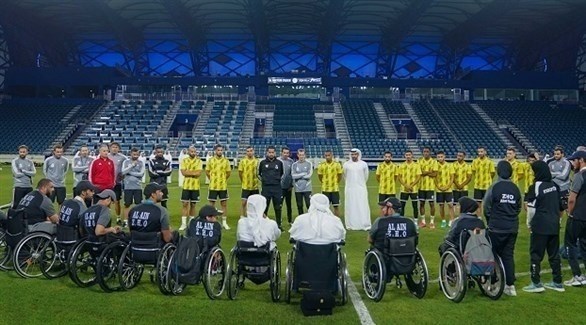 Heroes of the “Upper Zayed Organization for People of Determination” of the UAE National Team Players for the Knights of Will visited the training of the UAE First Soccer Team at the Al Nasr Club, to motivate the players of “Al-Abyad” before the next match against his Iraqi brother next Thursday, as part of the ninth round of the first group qualifiers for the decisive role of the Asian continent’s qualifiers for the 2022 World Cup.

The special visit of the “Knights of the Will” of the players of the “Higher Zayed Organization for Persons of Determination” received special recognition from the players of “Al-Abyad” and the technical and administrative bodies, amid a great management hospitality. of the Al-Nasr Club, where the delegation began their visit learning about the history of the club, which was founded in 1945, and its upbringing was linked to the game of football in the Emirates.

The main screen of the Al Maktoum Stadium received the delegation of the “Zayed Foundation for People of Determination”, which was headed by Abdullah Abdul-Ali Al-Humaidan, Secretary General of the Foundation, in the presence of Ahmed Abdul Rahman Al-Tunaiji, member of the National Teams and Technical Affairs Committee, On the need for honorable representation in the decisive and fateful matchups ahead, demanding the happiness of the masses and giving the best performance.

Ibrahim Salman Al Hammadi, Member of the Board of Directors of the Football Association and Chairman of the Committee for Community Affairs and Development, praised the pioneering step of the heroes of the “Zayed Foundation for People with Determination”, and the emphasis on integration. of the roles of society behind the country’s representatives in all forums, and said: “We are pleased with the unsurprising and generous initiative of the determination heroes of the Players of the UAE national team and the Zayed Foundation for People of Determination, in support of our national team’s journey to the 2022 World Cup Qualifiers.”

He added: “The timing of the visit, which precedes the team’s important match against its brother, the Iraqi team, reflects the cohesion of the sports street in support of Al-Abyad, and represents an important message to the players about the need to do the most precious and precious thing to make the audience happy, and come back with a positive result, which was confirmed by the team players in their friendly conversation with Heroes and Knights of Will”, noting that such initiatives reflect the social roles of national institutions, especially the Zayed Higher Organization for People of Determination, which deals with the social empowerment of people of determination.

For his part, the Secretary General of the Zayed Superior Organization for People with Determination, Abdullah Al Humaidan, affirmed his enthusiasm for involving people with determination, members of the Foundation, in various sports and community activities, and pointed out that the initiative represents a starting point for great cooperation, and the beginning of a challenge in a new sports field for people of determination, under the great care and support of the wise leadership.

On the other hand, Yasser Salem, the team manager, stated that determined people are an integral part of Emirati society, saying: “The unique initiative reflected the positive role of the Knights of Will in motivating and supporting their teammates first. team players, confirming the complementarity of roles between all sports and community bodies to achieve achievements that raise the UAE flag in international and continental forums.

For his part, Walid Abbas, defender of our national team, praised the pioneering step of the Knights of Will among the players of the Higher Zayed Organization for People of Determination, saying: “The positive initiative left a beautiful and distinctive impact on everyone”. players, and increased the great degree of enthusiasm among all, to make the greatest possible effort. In the upcoming matches, we hope to dedicate positive results and achievements to everyone.”