The heat rises, the fires intensify: 11,000 hectares burned in Zamora, 3,200 evacuated in Toledo 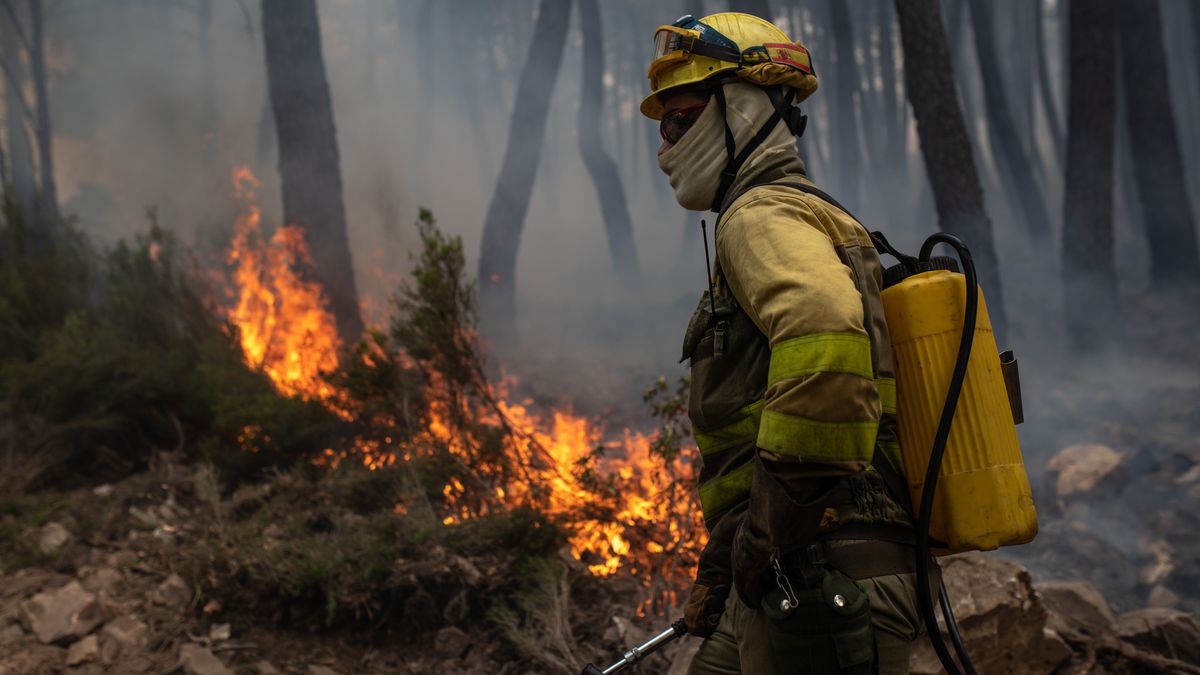 Neither the heat nor the fire give a truce this Friday. Temperatures will be even higher today across virtually all of Spain, which has colored the fire risk map bright red: the entire peninsula and Balearic Islands are extremely fire prone. Only the Canary Islands, Galicia, the line with Portugal (except for the one that goes through the provinces of Zamora and Salamanca) and individual coastal points are saved. The Cantabrian coast is also at extreme or very high risk. The State Meteorological Agency (Aemet) is forecasting significantly high temperatures in Andalusia and storms in the eastern interior of the country for this Friday, which may be accompanied by very strong gusts of wind locally. The fire that is of most concern at the moment is that of the Sierra de la Culebra in Zamora, which is already affecting 11,000 hectares and has, according to data, forced the eviction of about 250 residents from eight municipalities Estimates from the Castilla y León Ministry of the Environment. Another fire that broke out next to the historic Puy du Fou theme park in Toledo has forced the evacuation of around 3,200 people. Two of the four fires in Catalonia have been stabilized. Firefighters are focusing their efforts on the blazes at Artesa de Segre and Lladurs in Lleida. Meanwhile, in Castellón, 660 people have been evacuated from Caudiel, where the flames “have surrounded the town,” reports Efe.

The first heatwave of the year in Spain reached its final pressure this Friday, with 40 provinces spread across 14 autonomous communities with high temperature warnings just a day before the early heatwave officially ended. The Aemet forecast shows that the only municipalities spared from the stifling heat this Friday are Asturias, the Canary Islands and Galicia, and the provinces of Cadiz, Huelva and Malaga.

West Zamora is burning. The flames meander uncontrollably through the Sierra de la Culebra, a natural area of ​​great ecological value, and have already burned down 9,000 hectares, according to the Junta de Castilla y León since lightning ignited the first sparks on Wednesday night. The intensity of the fire and smoke that engulfed the area has led to the evacuation of eight towns, with about 250 people being relocated to other towns and pavilions. The Board has requested the assistance of the Military Emergency Unit (UME), which has increased its deployment with 122 troops and 53 land resources while maintaining the alert level at “medium”, meaning fewer troops are being mobilized despite the known heat wave, which would hit an area badly hit by the lack of rainfall in recent months.

Estimates of the affected area #IFSierraDeLaCulebra: approximately between 8,500 and 9,000 ha burned ?

The cores distributed are Boya, Villardeciervos, Cabañas de Aliste, Palazuelo de las Cuevas, Pobladura de Aliste, Torres de Aliste, Mahíde and San Pedro de las Herrerías. The force of the blaze has caused sirens to sound Thursday night, urging people to leave their homes while work is carried out to protect homes. The extent of the fire is Category 2 out of 3 for impact on roads and populated communities. Workers’ Commissions has announced that it will report to prosecutors that the autonomous government will not apply the “high” fire hazard until July 1, which they believe is incorrect because it follows a 1999 model and involves fewer regional funds to extinguish the fire fire.

The disaster has unnerved the residents of this area to the west of Zamora. In Villardeciervos, elderly people living in a residential home were taken by minibus to a nursing home in La Bañeza (León), relatives of some of those affected confirmed. The smoke, say those in that part of the province, can be felt several kilometers away as the active fronts the brigades are working on continue to advance. The devastation, which has killed several animals on ranches and engulfed large areas of forest, can be seen both in the aerial photos and at the foot of the road sent by the Environment Department, which has also reported that this week’s temperatures nearing 40 and wind gusts with around 40 kilometers per hour damage the extinguishing tasks. This was stated by Councilor Juan Carlos Suárez Quiñones, who has been criticized by firefighters’ unions for the strategy, which reduces the number of troops trying to contain the blaze while gaining the support of professionals from other communities.

Efforts are focused on Artesa de Segre and Lladurs

Catalonia faces multiple fires. The heat peak is expected for this Friday and will arrive with several active fires in the Tarragona and Lleida regions. The firefighters of the Generalitat, early Thursday morning, managed to stabilize the flames of Corbera d’Ebre (Tarragona), which burned about 400 hectares of land, while the fire in Lladurs, in Lleida, developed, although it had only burned a hundred hectares, has a great potential for growth. At 11:30 a.m. this Friday, it was perimeter but not stable. According to the firefighters who maintain twenty teams in Lladurs in the Solsonès region, the fire is still active, with a very long right flank and a very unstable perimeter, with the potential to burn up to 50,000 hectares.

Regarding the fire in Artega de Segre (Lleida), the chief of operations of the fire brigade, David Borell, has assured that the right flank is still stable and the left is burning, although within the 5,000 hectare radius from which they foresee the Flames, reports Efe.

The one in Castellar de la Ribera, also in Lleida, also managed to stabilize on Thursday. However, the mayor of the city, Claustre Sunyer, explained that this Friday will still be a difficult day due to the high temperatures, for which she has asked “not to lose our vigilance”. The councilwoman has celebrated that the fire did not cause any human damage and that “neighbours’ houses were saved”, although she regrets that fields and forests in the area have been destroyed. Firefighters can focus on the most active fires in Artesa de Segre and Lladurs.

Flames are raging next to the Puy du Fou park: 3,200 evacuees in Toledo

Almost fifty members of 12 air and ground media are currently taking part in extinguishing a fire that was declared after one in the afternoon at the Zurraquin estate in the municipality of Toledo and near the French theme park Puy du Fou, Efe news agency reports. According to the Forest Fire Information System of the Ministry of Sustainable Development, the fire is affecting an area cataloged as grassland scrubland on the forest map and is continuing without being controlled. 26 media and 90 people were involved in the extinguishing work of the fire – which was detected by the emergency and rescue service 112 at around 1:03 p.m. – and now 4 air media, 7 ground and one line and coordination, which combine a total of 47 people. At the moment the number of hectares affected by the fire is not known, which does not affect the historic park located on an adjacent farm and an urbanization of about twenty chalets and a farm.

In a statement released this afternoon, the management team of the French theme park thanks “for the great responsiveness of the competent authorities: both the Fire Department of Toledo, Geacam, the National Police and the Civil Protection, who have helped” and rendered It is possible that the 2,500 visitors, 700 employees, the 200 birds, the 55 horses and the rest of the animals were evacuated and suffered no harm.

The forest fire that is affecting the town of Caudiel (Castellón) this Friday has forced the evacuation of the residents of this small town to begin around five in the afternoon, as the flames are “out of control” and “have surrounded the town”. making extinction difficult. This was told to Efe by Provincial Firefighters Consortium sources, who indicated that efforts are now focused on defending the homes of this town of about 660 people, in the Alto Palancia region, as some homes are “already threatened by fire”. The same sources have detailed that this fire develops under adverse conditions, as it is a very hot day, the wind is a little gusty and the humidity is very low, so the fire “does a little what it wants”.

Controlled and monitored the fire in the Sierra de Leyre

The fires declared on Tuesday in the Sierra de Leyre, Tafalla-Larraga and Olleta-Leoz in Navarra have stabilized without any outbreaks in the last few hours. Navarra Fire Service parks checkpoints stayed overnight in the areas affected by the fires, which were declared late Tuesday, to avoid possible outbreaks of embers, reports the provincial government. Those responsible for putting out the fire will assess the situation this morning to decide whether to move from the stabilization phase, where the fires are officially still in, to the control phase. Likewise, the Directorate-General of the Interior was able to deactivate level 2 of the emergency plan for the risk of forest fires, which was activated due to the evidence that the fire, particularly in the case of Sierra de Leyre, could not be smothered solely with the funds of the regional community and there is a potential risk to the population. Fire brigade checkpoints, with personnel from the Environmental Watch and Provincial Police, monitor the extent of the burned land and continue work to clear and rebuild stumps and smoldering embers.

The flames worrying in Aragon are those of the fire that has been declared in an agricultural area of ​​the municipality of Nonaspe, in Zaragoza, which has destroyed at least 1,200 hectares, many of them cultivated and driven by the wind at speeds of up to 30 kilometers per hour. Aragón enters the red stage tomorrow Saturday due to “extreme risk of fire”. “We did not know or were not aware of such an extreme and dangerous situation,” Agriculture Minister Joaquín Olona told Cadena SER.

The flames at Almonaster la Real (Huelva) are worrying

In Andalusia, the fire declared in the municipality of Algatocín (Málaga) has been completely extinguished, while those in charge of the Infoca plan look at the fire that has been burning in the municipality of Rosal de la Frontera, province of Huelva, since Thursday afternoon. Infoca is also working to control another fire reported in the Finca de Lima area of ​​Almonaster la Real (Huelva), where 18 forest firefighters, an environmental agent and two fire engines worked all night.