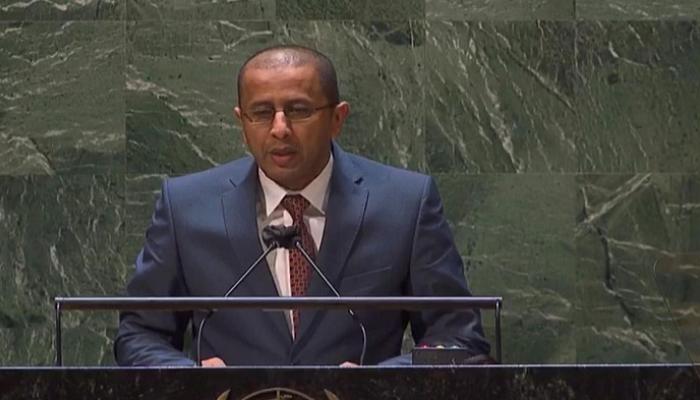 The countries of the Gulf Cooperation Council stressed the need to return to diplomacy and resort to dialogue and peaceful negotiations between the parties to the Russian-Ukrainian crisis.

Member states of the Cooperation Council for the Arab States of the Gulf stressed the need to abide by the provisions of Article Two of the United Nations Charter not to use force or threaten to use force in international relations.

This came in a statement by the Arab Gulf states, during the emergency special session of the United Nations General Assembly on Ukraine, which was delivered by the Chargé d’Affaires on behalf of the permanent delegation of Saudi Arabia to the United Nations. Nations, Counselor Mohammed bin Abdulaziz. Al-Ateq.

Al-Ateeq underlined that the countries of the Gulf Cooperation Council continue with great concern and regret the repercussions of the situation in the Republic of Ukraine, especially the humanitarian ones, given the increase in the number of refugees and displaced persons and the exacerbation of human and materials.

He said: The positions of the Gulf Cooperation Council countries are consistent with their constant calls for adherence to the well-established principles of international law and the United Nations Charter that govern relations between states and are based on respect to the sovereignty and territorial integrity of states. , including Ukraine within its internationally recognized borders, respect for the principles of good neighborliness and non-interference in the internal affairs of states.

He reiterated that the GCC states have friendly relations with all parties and appreciate and encourage the efforts made by all actors to prevent further suffering to civilians.

He noted that, in this regard, the GCC countries commend the efforts made by the countries that welcomed those fleeing conflict zones without discrimination.

On behalf of the Gulf Cooperation Council states, he called on all parties to abide by their obligations under international law and international humanitarian law with respect to the protection of civilians and refrain from attacking or destroying vital facilities. , in addition to emphasizing the commitment to this by caring for the prisoners, wounded and sick, returning the remains of the dead, searching for the disappeared and informing their families of their fate in accordance with international obligations on the matter, facilitating access safe and prompt delivery of humanitarian aid to all in need, and respect and protect medical and humanitarian workers.

He praised the tireless efforts of the United Nations and humanitarian organizations to urgently respond to urgent humanitarian needs, in particular the driving of a humanitarian aid convoy to the city of Sumy, which took place after the agreement between the parties to the conflict.

He expressed the hope of the GCC states that this initiative will be a step on the way to reaching a peaceful and sustainable solution to the crisis.

Concluding the speech, Counselor Muhammad Al-Ateeq drew attention to the fact that the GCC states support the current path of dialogue between the parties to the conflict in order to reach a peaceful settlement that will prevent the region and the world from dangerous situations. negative political, economic and humanitarian repercussions.