The government offers government support while the ERC parks self-determination 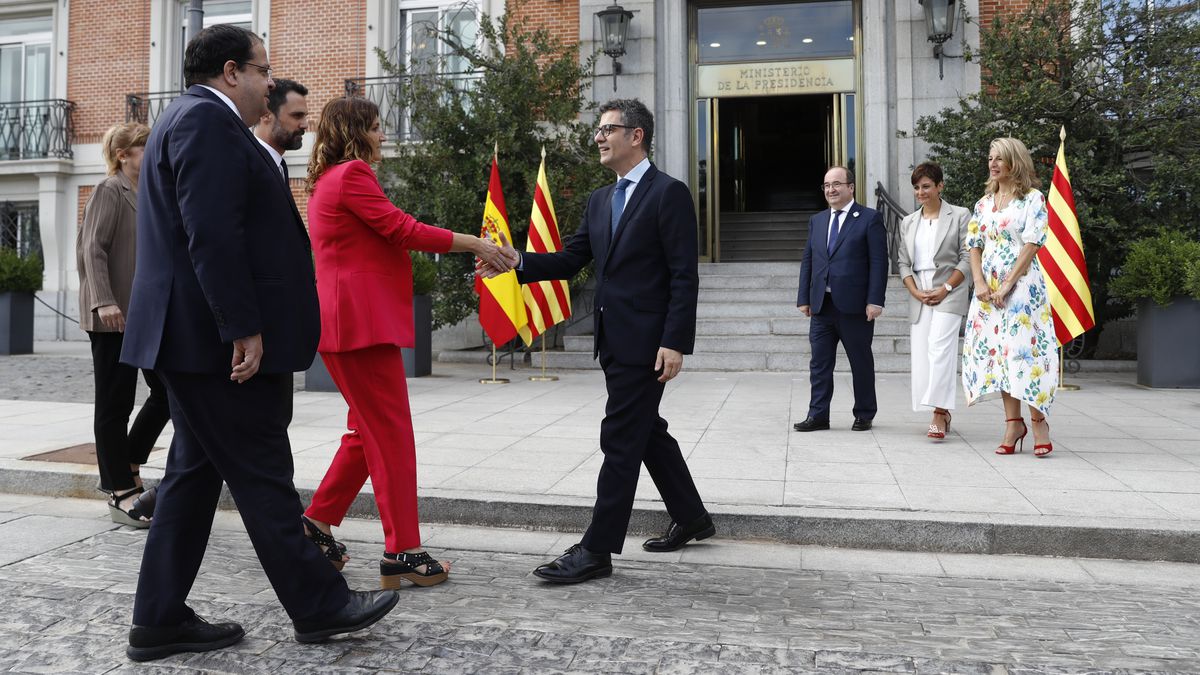 The dialogue table between the central and Catalan governments has borne its first fruit without addressing the most glassy issues for the time being. ERC sets aside its maximum demands for self-determination and pledges to continue to operate within the legal framework in exchange for some concessions from Pedro Sánchez’s executive, particularly on linguistic matters. The government will address the European Parliament to request that it allow the use of Catalan and expresses its support for the Law on Languages ​​in Education, which was passed by Parliament with the approval of the Socialists and challenged by the Supreme Court of Justice Justice of Catalonia before the Constitution.

The central governments and the Generalitat will take a summer break with the Catalan folder for the time being. After the meeting two weeks ago between Presidents Pedro Sánchez and Pere Aragonès, it was the turn of the dialogue table between the two executives this Wednesday, now without their highest representatives. And for the first time, it went beyond the simple photo: unlike at the two previous meetings of the bilateral body, agreements were reached at this meeting. The most specific, on various actions to promote Catalan. And another, less precise, about what both parties have called the “de-judicial settlement of the political conflict”.

Both delegations left the meeting in La Moncloa satisfied and leaving some doors open so that soon more fruits of a negotiation can be presented, which strongly criticizes the right and also the ERC partners in government, Junts. The agreements are contained in two documents that convey a certain climate of return to institutional normality after the federal stumbling block Pegasus case Spying on pro-independence leaders, which soured relations between executive branches.

The two proposals that the Generalitat has put on the table since this forum was agreed, in exchange for facilitating the investiture of Sánchez, are amnesty for those affected by judicial or administrative cases related to the process and the celebration of an agreed self-determination referendum. The rejection of these two options by the central government is already known, but for now both parties have given each other some leeway to negotiate other legislative reforms.

The government’s thesis is that before addressing its demand for self-determination, “a level playing field” must be guaranteed, d led the Catalan delegation. At this point, ERC calls for changes in the Penal Code. The central topic is the possible modification of the criminal offense of hate speech, which could result in alleviating the criminal situation of those who have fled abroad, e.g former president Carles Puigdemont or the general secretary of Esquerra, Marta Rovira.

According to government sources, the initial position of the Catalan formation is to suppress this crime, which most of the leaders of the process. On the other hand, the executive is not ready to go beyond “harmonizing with the most progressive European laws”, according to the Presidency Minister, Félix Bolaños, who headed the central government representation together with the second vice-president, Yolanda Díaz, and the ministers for territorial politics and culture. That would mean relaxing the sentences she faces, which would also lower the pending charges in cases like Puigdemont’s.

Bolaños repeatedly stressed that the government would only tackle this reform if it had a “sufficient parliamentary majority” to invite the ERC to negotiations. The impression on both sides is that there is room for talks, because Republicans do not present crime elimination as a red line either. In the document signed after the meeting, the two parties limit themselves to expressing their willingness to to reach an agreement on this in Parliament by the end of the year.

The document, which deals with the so-called “de-justice”, is above all a statement of principles without concrete measures. But the government stresses the importance of the Generalitat’s commitment to act without breaking the legal framework, presenting this as proof that the situation in Catalonia has been pacified. The document expressly points out that any “political solution” must be reached within a “legally secure framework”, “according to democratic principles and orders” and with the support of “a broad and transversal social majority”. The text also contains demands from the independents, such as rejecting “the criminalization of democratic political projects” in order to enable “balanced and guaranteed negotiations”. In practice, it is an obligation to prevent political disputes from ending up in court without further specification.

Despite the fact that the Generalitat always wanted to separate the dialogue table from the discussion of sectoral issues in order to emphasize the importance of resolving the political conflict, the shielding of the Catalan was the other big point of the La Moncloa meeting. Vilagrà justified it as an exception to the constant “following of the Catalan educational model”. The document approved on this subject contains the government’s explicit support for the new Law on Languages ​​in Education recently passed by Parliament with the support of the PSC. Bolaños himself described this new regulation as “an example of very broad transversal agreements”.

The Supreme Court of Catalonia considers this law to be ignoring its sentence, which forced at least 25% of subjects to be taught in Spanish, and has asked the Constitutional Court to examine it. Instead of this quota, the regulation approved by Parliament leaves each school the autonomy to decide the allocation between the languages ​​based on their sociolinguistic circumstances. The document approved at the table indicates that “Catalan must continue to be the language normally used as the language of instruction”, while Spanish must have guarantees of “an appropriate presence in the curricula and language projects”.

With regard to the protection of Catalan, the government, alongside the school, undertakes to ask the European Parliament to authorize the use of this language. Bolaños guaranteed that this will also happen with the other co-official languages ​​in Spain if the regional governments involved request it. At the same time, the two parties agree to increase the presence of all co-official languages ​​in the Senate, where an initiative to this effect is already being negotiated. In Congress, on the other hand, the PSOE recently rejected a similar initiative by all nationalist groups.

Vilagrà explained that Junts had already been informed about the content of the meeting. And the initial reaction of the ERC partners in government was not very enthusiastic. Its spokesman, Josep Rius, felt the table was moving away from its original objectives and criticized it for raising sectoral issues “however respectable”. “It would be good if the president explained at parliamentary headquarters what orientation the table is taking,” said the junts spokesman.