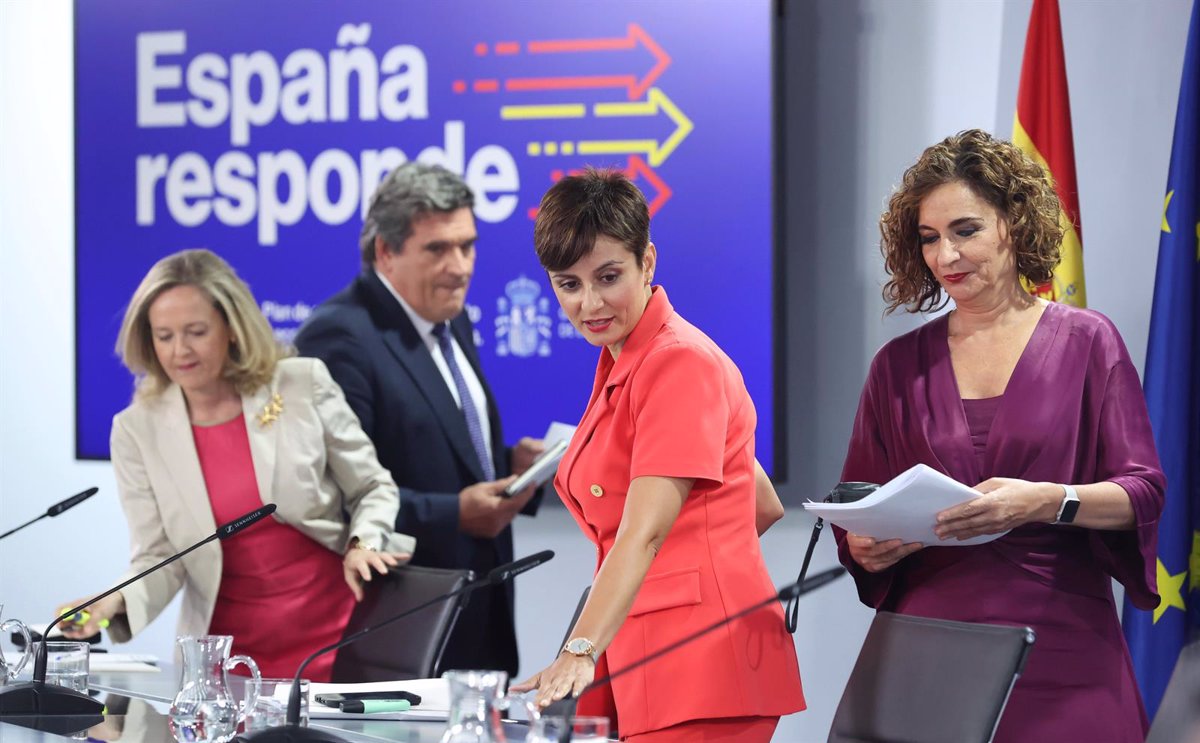 Higher inflation results in the consumption deflator forecast being revised upwards to 7.8% for 2022 and 2.9% for 2023.

The government left its growth forecast for the Spanish economy at 4.3% for this year, but lowered its estimate for 2023 by eight-tenths to 2.7% amid high uncertainty over the impact of the war in Ukraine and the US Rise in prices, especially energy prices.

This was stated by First Vice-President and Minister for Economy and Digital Transformation, Nadia Calviño, during the press conference after the Council of Ministers this Tuesday, where she defended that “everything continues to point to strong growth in the Spanish economy”. .

The growth forecast for this year is based on the favorable development of the labor market, which has allowed the number of members to increase to 20.4 million and unemployment to drop below three million unemployed, Calviño stressed.

Also due to the strong growth in investment in capital equipment and intellectual property driven by the recovery plan; the favorable development of the foreign sector, which is reflected in the positive “surprise” of tourism in the first semester and budget consolidation.

In this sense, while waiting for the preliminary data on GDP for the second quarter to be published by INE next Friday, Calviño has assured that all the indicators show strong growth in the Spanish economy also between April and June.

According to Calviño, these new forecasts from the executive are in line with the estimates of all national and international organizations that have revised down their growth forecasts for Spain’s GDP in recent weeks. For example, the European Commission estimates growth at 4% this year and 2.1% next, while the Bank of Spain puts it at 4.1% in 2022 and 2.8% in 2023.

And it is that the increase in energy prices, together with the negative impact on the main European economies, essentially the German one, is slowing down the recovery of the Spanish economy after the pandemic, which had accelerated in the second half of 2021.

“The main challenge for the Spanish economy at the moment is inflation,” admitted the first vice-president, who assured that the measures promoted by the government capped the consumer price index by more than 3.5 percentage points.

This higher and more sustained inflation in recent months has prompted the executive to revise upwards the forecast for the consumption deflator in 2022, which stands at 7.8% and 2.9% in 2023.

High energy prices will also lead to a slowdown in economic activity in the euro zone, which will reduce foreign demand. However, the impact of these factors is partially offset by the contribution from the implementation of structural reforms and the investments of the stimulus plan.

Therefore, national demand will continue to drive economic growth in 2023 with a contribution of 3.3 points, supported by the momentum of investments, which, although influenced by the international situation, will continue to grow at a high rate of 6.6% will. driven by the execution of the recovery plan funds.

For their part, abroad will be affected by the deteriorating outlook for the global economy and is expected to contribute -0.7 points.

The forecast update includes the latest data and reviews the composition of growth. In this way, thanks to the good export performance in the first part of the year, as well as the good development of tourism, which is expected to recover this year, the overseas sector started to contribute positively to the growth, 0.5 percentage point % of the 2019 level.

On the other hand, the contribution of domestic demand is revised slightly downwards due to the lower momentum of public and private consumption in the first quarter and now contributes 3.7 percentage points.

According to Calviño, one of the outstanding elements of economic growth in 2022 is the positive evolution of the labor market, despite the slight slowdown noted in mid-July. The Vice-President has assured that the changes promoted by the labor reform will enable employment growth of 3.7% and unemployment to fall by two percentage points to 12.8%.

In 2023, according to the macroeconomic scenario, jobs will continue to be created, which will allow for a further reduction in unemployment and an unemployment rate of 12%, and in terms of prices, the private consumption deflator would register a sharp deceleration until reaching growth of 2.9%.