the garnet star, the red gem of Cepheus, is a beautiful thing 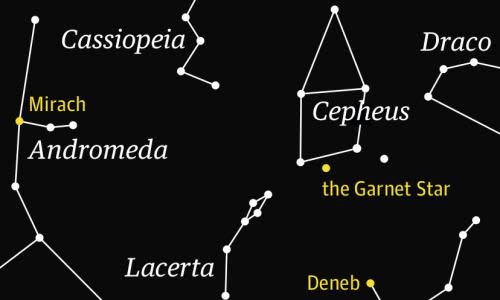 Known as Cepheid variables, stars in constellations are used to measure distances to nearby galaxies.

This week, we are going to focus on an often overlooked northern constellation. Cepheus is named after the king of ancient Ethiopia in Greek mythology. Part of the Perseus myth, Cepheus is married to Cassiopeia and is the father of Andromeda, the princess whom Perseus saved from the sea monster Cetus.

Cepheus is one of the 48 constellations listed by the astronomer Ptolemy in the 2nd century. The constellation is easy to miss as it contains only moderately bright to faint stars, but its shape is distinctive once located.

The brightest star is Alderamin, derived from the Arabic phrase meaning “right arm,” meaning the king is upside down in the sky, or with his back to us.

The most significant star is Delta Cephei (∂ Cep). Located nearly 1,000 light-years away from Earth, it was observed to be pulsating by John Goodricke in 1784. These pulsating stars, called Cepheid variable stars, are now used to measure distances to nearby galaxies. The most beautiful star is the Garnet Star, named for its deep red color.

The graphic shows the view to the northwest from London at 20:00 GMT on March 14. Unfortunately, the constellation is not visible from much of the southern hemisphere.