The Fundación ONCE awards grants of 2,000 or 6,000 euros to young people with disabilities to study languages ​​abroad 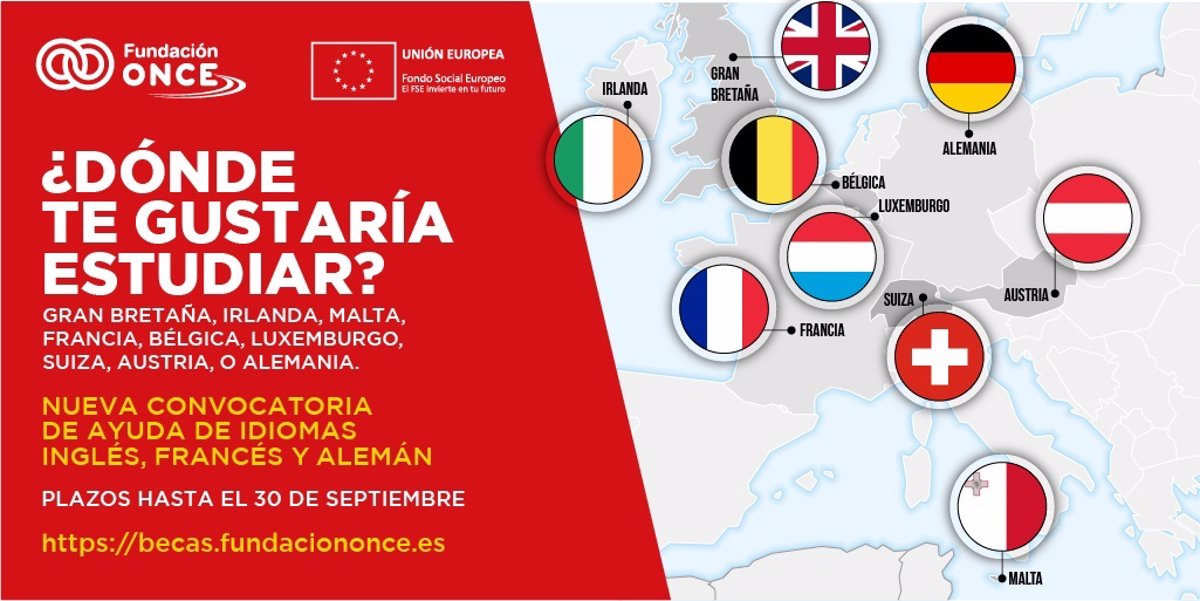 The ONCE Foundation holds open its 5th edition of Language Aids in which it offers grants to enable young people with disabilities between the ages of 18 and 29 to study English, French or German in a European country whose official language is one of these three languages the foundation reports.

Developed within the framework of the Youth Employment Operational Program 2014-2020 (POEJ) co-funded by the European Social Fund, the initiative aims to promote language training and international mobility of young people with disabilities, taking into account “the deficit courses in language skills” and the difficulties encountered in entering the labor market for this population group.

In this context, the Foundation recalls that people with disabilities “have higher barriers and obstacles to accessing a job” and that all labor market indicators show that their situation “is clearly disadvantaged compared to the situation of people without disabilities”.

In short, only one in three people with disabilities has a job. However, the gap to the population without disabilities narrows significantly when the level of education improves.

On the other hand, the foundation highlights that language skills significantly improve employability and that international mobility programs are reported to increase job opportunities by up to 25%.

With all this in mind, the ONCE Foundation has launched the V-Call for this language program, which can be viewed at ‘.https://becas.fundaciononce.es‘, stating that the grant is for courses and stays of four to twelve weeks.

Specifically, the scholarships for stays of four weeks amount to 2,000 euros, those of 12 to 6,000 euros. All include training in English, French or German through courses that must take place between March 1st and December 31st this year and which must have a course load of “at least 20 weekly teaching units of at least 40 minutes each”.

The countries where the scholarship holders can receive their courses are Great Britain, Ireland, Malta, France, Belgium, Luxembourg, Switzerland, Austria or Germany.

Those wishing to receive an allowance for this purpose must have a disability level of at least 33%, be aged between 18 and 29 at the time of application and be registered in the National Youth Guarantee Scheme before the start of the course, and have a minimum level of B1 in the language for which they are applying for the grant, or another title or assimilated level. You can submit your applications until September 30th.

As a novelty, in this fifth edition, the students who have benefited in previous editions of this appeal for help can again be scholarship holders.