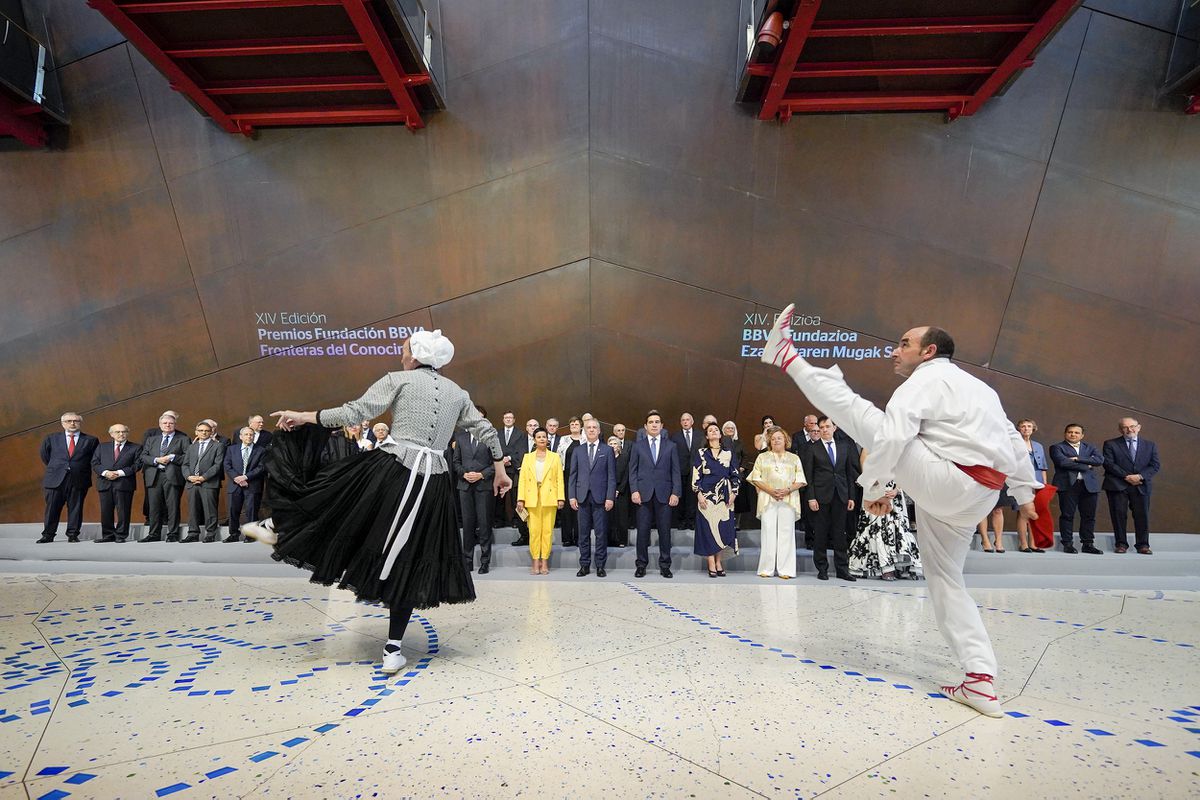 The unknown frightens and excites, and people and their societies navigate between these two emotions. Most conservatives prefer to stay in familiar surroundings, but often get carried away by the few adventurers who feel the call of the frontier. Over time, if it succeeds, the revolutionary option will become something the new generations will want to keep, and those who gamble on excitement will be honored, even by the shy ones.

This afternoon, at the Euskalduna Palace in Bilbao, the BBVA Foundation awarded prizes to those responsible for some revolutions that are now part of humanity’s undeniable heritage. The 14 winners of the fourth edition of the Frontiers of Knowledge Awards responded with gratitude, but didn’t forget to claim the solitude of the pioneers. Robert Langer, awarded in the Biology and Medicine category for developing the nanoparticles that made coronavirus vaccines viable, recalled that many scientists criticized his solution as “impossible”. Langer, co-founder of Moderna, one of the companies that makes the vaccines that stopped the pandemic, also didn’t forget that when they started developing “vaccines to treat Covid-19, the [diario] Boston globe published a cover story entitled “That’s Not How Science Is Done” with a photo of himself below. Langer shared the €400,000 prize with Drew Weissman and Katalin Karikó of the University of Pennsylvania, who have also made key contributions to the use of messenger RNA in drugs against cancer, vaccines and autoimmune diseases.

The true innovators, those who work at the frontiers of knowledge, are always alone, and it is likely that asserting their solitude is also an act of communion with the authors of past revolutions and support for those who lead them become future. In his lectures, Karikó usually shows a letter from the pharmaceutical company Merck & Co (MSD) rejecting his request for $10,000 to fund his research, a warning to the fearful of the future and a spur to the brave of the present. Speaking during the ceremony, co-chaired by the President of the BBVA Foundation, Carlos Torres Vila, and the President of the CSIC, Rosa Menéndez, the Hungarian researcher recalled her predecessors: “This award also recognizes other scientists who, during this period have worked diligently for decades and helped lay the foundation of our work.”

Since its inception 15 years ago, the ultimate goal of the Frontiers of Knowledge Awards has been to promote “rigorous and validated knowledge” as “the finest compass and tool we have for understanding the world and ourselves,” and therefore “to face the great challenges of our time”, said the President of the BBVA Foundation in a speech at the end of the event. According to Torres Vila, the vaccines against Covid 19 have shown that the key to success in the face of great challenges is “the knowledge generated thanks to international collaboration”. Going forward, he assured, this collaboration will be necessary to “counter the severity of climate change and biodiversity loss, both of which are likely among the greatest disruptions in history.”

Ambition and daring are necessary qualities in explorers, but the experience and accumulated knowledge of the last few decades has shown that even the fearful have their reasons for wanting to rein in those who never see limits. The Climate Change and Ecology and Conservation Biology categories are dedicated to scientists who want to understand the complex relationships behind the balance that made our planet habitable and is now in peril. In the first, the winners were Lonnie and Ellen Thompson, a pair of explorers who have conducted 64 expeditions to the top of the world’s highest mountains since 1974 to uncover the history contained in ice cores preserved in glaciers. Climate information from millennia, from precipitation or volcanic eruptions, is stored in these blocks of ice, which helps to reconstruct the climate of the past.

In his speech, Lonnie Thompson recalled that as early as 1992, thanks to information gathered in his ice bars, he and his wife “testified before the US Senate on the reality of extreme climate change documented in remote areas of the world”. “Since then, has “The scientific literature on climate change and its projected impacts continues to accumulate, but unfortunately the people of the world and their governments have done little to slow the accelerating rise in atmospheric concentrations of greenhouse gases,” he said Loneliness of the pioneers in front of an audience that included the lehendakari, Íñigo Urkullu, and the mayor of Bilbao, Juan Mari Aburto However, Thompson was optimistic about the human ability to become conscious and according to social, scientific and technological ones To search for solutions to “an existential problem” of mankind in.

Simon Levin, honored in the Ecology and Conservation Biology category along with Lenore Fahrig, and Steward Pickett, also gave a speech warning of the dangers of unchecked human expansion. The mathematician responsible for introducing the dimension of physical space, territory and its different scales and contexts to the study of ecosystems also spoke of another “existential threat”, in this case the loss of biological diversity. Their models can be a basis for understanding the relationships between natural and human systems and creating policies that allow their coexistence. “The diversity of habitats and biomes that exist in the world, the spread of invasive species and infectious diseases, the design of protected areas, and the mobility of species, including ours, are all factors that underscore the need to develop approaches that support these.” comprehensively consider the spatial dimensions of population dynamics, species interactions and nutrient fluxes,” explained Levin.

In a world of this complexity, machines can be an aid to understanding, and Judea Pearl, honored in Information and Communication Technologies for his pioneering contributions to artificial intelligence, is one of the people who have contributed most to the development of machines that Can solve problems like humans. But beyond that, as he explained in his speech, trying to get artificial intelligences to solve previously impossible problems has allowed him to get to know natural intelligences a little better. “Driving a car, crossing the street or going to the doctor: we do all of that [los humanos] amidst an ocean of noise and uncertainty, and interestingly, you and I have managed to navigate that ocean quite well, with surprising comfort and great dexterity,” Pearl said. However, all of these tasks are very difficult for a robot. “By we ask ‘How would a machine do that?’ We get an idea of ​​how we do it because machines are like flexible laboratories to test different theories of human thinking and see which of them works as well as we do… In fact, research in artificial intelligence some fundamental insights revealed mysteries of reasoning,” said the University of California, Los Angeles (UCLA) researcher, who also recalled that his early investigations “were met with skepticism.”

Attempting to bring science into the public domain often emphasizes its practical applications, somewhat betraying its fundamental nature as the best method for satisfying the innate human attraction to the unknown. This dedication to knowledge for the sake of knowledge, which according to the Director of the BBVA Foundation, Rafael Pardo, is the fundamental inspiration for the Fronteras Awards, is best reflected in the Basic Sciences category. The French mathematician Jean François Le Gall received him along with Charles Fefferman, absent for health reasons, who highlighted his contributions to the understanding of “phenomena in two dimensions”, such as the elaboration of precise maps, the flow of water over a plane surface or the electric field in two-dimensional materials”. The mathematician, who noted in a morning interview that the main direction of his research “is mainly aesthetic”, also thanked the recognition of a country like Spain which, apart from the usual themes, considers that it shows mathematicians much more respect as your own country. “At least that’s how I lived,” he said.

Also present at the end of the ceremony were two economists from Stanford University (USA), Matthew Jackson and Mark Granovetter, who received awards in the categories of Economics, Finance and Management and Social Sciences respectively. Both have highlighted the relevance of personal and group relationships that individuals, companies and institutions have and their social and economic performance in areas as relevant and diverse as professional careers, income levels or financial dependency. “Economics has traditionally ignored the fact that most economic interactions — to borrow a term from my colleague Mark Granovetter — are embedded in social environments,” Jackson said.

The economist provided an archetypal example of the importance of social relationships in the economic situation of each individual. “If a person who is unemployed has their social networks (family, friends and acquaintances) in the same situation, it will be much more difficult for them to find a job than if they were employed.” For this reason, he considers a change in mechanisms is necessary to reduce inequalities. “The redistribution of wealth and income only addresses the symptoms of inequality and not its root causes. It helps us see the need for policies that enrich people’s networks and provide information and opportunities that their networks don’t provide,” he said. “This perspective explains why inequality is so persistent and why immobility and inequality go hand in hand,” he concludes.

Finally, in the music and opera category, which the Frontiers of Knowledge Award puts on an equal footing with other fields of science in an original way, the prize goes to the American composer Philip Glass. In his speech, Glass shared how when he started writing music he realized that some of the skills he created were the same ones he needed when he was studying physics or mathematics. “I discovered that almost everything I did could be expressed through music,” he said. The connection between art and science is a matter of course for the composer, who dedicated works to personalities such as Einstein, Galileo, Kepler and Stephen Hawking. These personalities “were very radical in their way of life and changed the world they lived in,” he expressed, before concluding with a manifesto for all creative minds who, even if they risked the loneliness, accepted the dangers, themselves the unknown: “The joy of creating brings enormous satisfaction, it wakes me up in the morning. There should be some kind of compromise to bring some joy to the world and hopefully to yourself.”

- Advertisement -
Share
Facebook
Twitter
Pinterest
WhatsApp
Previous articleThe Red Cross is assisting 312 people in temporary shelters in Zamora, through which 1,700 evacuees have already passed
Next articleIberdrola is taking action against the fine of 435 million at the Mexican supervisory authority