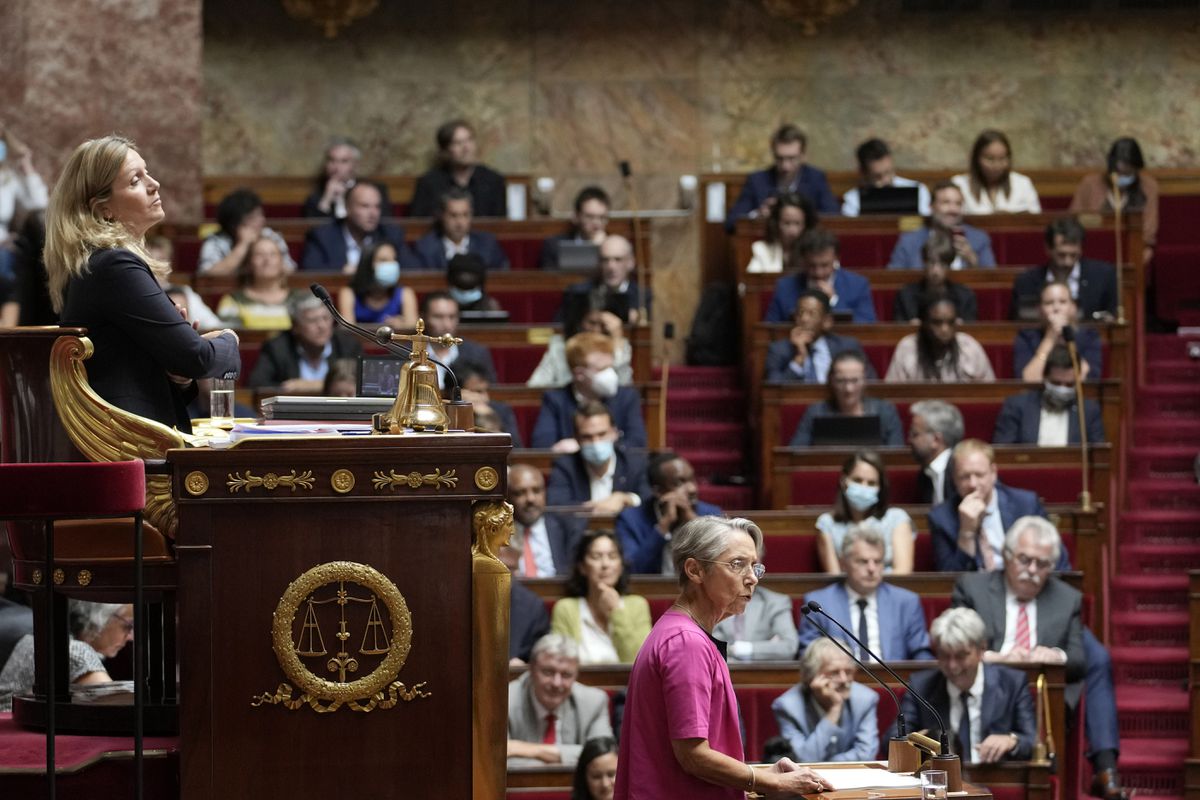 With the loss of an absolute majority in the National Assembly, Emmanuel Macron is breaking new ground in his second term as President of France. But he’s not the only one. Faced with a map of divided political forces and no dominant forces, all formations must learn to legislate through negotiation. Commitment is the key word, and Prime Minister Élisabeth Borne stressed it most when she presented her roadmap to MPs in her first speech to the Chamber this Wednesday, with which she must keep a constant pulse driving the ambitious reforms of the Macronismo.

“The French elected an assembly without an absolute majority. They invite us to new practices, to a sustainable dialogue and to actively search for compromises,” said Borne. The national and international “context”, he stressed, with the war in Ukraine, which affects security and “overshadows the economy not only in France but also in the world”, the increase in energy prices or the “environmental emergency”. a panorama that “forces everyone” to make this conciliatory effort.

The first female head of government in three decades assures that her team is ready, in the absence of a parliamentary majority, to achieve “project majorities”, i.e. to negotiate laws text by text and to seek individual support for every legislative initiative. “Engagement means everyone accepting to take one step at a time. And that doesn’t mean erasing our differences or giving up our beliefs,” he said.

How difficult it is was shown not only by the frequent interruptions he suffered during his speech, but also by the fact that the left handed a motion of no confidence in Borne shortly before his speech, as they did not put themselves to the vote in confidence after his speech. With the words “Let’s vote, let’s vote” and “trust, trust,” he was repeatedly interrupted by members of parliament, especially from the left-wing alliance Nupes, responsible for the motion of no confidence, which has little chance of success.

On Monday, the new government spokesman Olivier Véran confirmed that Borne would not submit to a vote of confidence. “We are not sure that the conditions for that trust are met,” he said in reference to the relative majority but not the absolute (289 MPs) with which Macronismo adds 250 seats with allied parties like MoDem and Horizons.

From the extreme right of Marine Le Pen to the extreme left of Mathilde Panot, president of France Insumisa’s parliamentary group and supporter of the no-confidence motion, the opposition has criticized Borne, and therefore Macron, for saying “as if nothing could have happened” at the Depicting general elections and a “masquerade” after which they want to continue governing as if they were still in control of Parliament. Trust, they answer from the ranks of the macronists, and Borne confirmed this Wednesday that it will be built up “patiently, text by text”.

Borne’s first test will be the Purchasing Power Protection Act, which the executive branch plans to pass this month. The Prime Minister also counted among her priorities full employment, a more environmentally friendly economy and the renationalization of the electricity company EDF. Instead, he’s tiptoed through one of the reforms met with the greatest opposition from the assembly and the populace: raising the retirement age to 65, and limits himself to saying between pauses that “we’re going to do a little bit more.” have to work as weather”.

Despite criticism from the opposition, particularly from the left, Borne is not the first French leader to refuse to submit to a confidence vote, a traditional but not mandatory measure for a prime minister. Neither did predecessors like Georges Pompidou, Michel Rocard or Édith Cresson.

The right rules out an “unnatural alliance” with the left

Shortly before Borne’s arrival in the National Assembly, Nupes introduced the motion of no confidence, which could not be voted on for 48 hours. The maneuver, which requires the support of at least 58 deputies, was carried out thanks to all the forces of the alliance – socialists, communists and ecologists, as well as France Insumisa.

Added to this is success, which seems more than unlikely, because moving the process forward and overthrowing the government requires an absolute majority, which the left-wing alliance with 151 MPs is far from achieving. Nor does it appear that she will have the support of other parliamentary opposition forces: Despite her accusations against Borne, both the traditional Republican right wing and Marine Le Pen’s National Rally, which is one of the main forces in the semicircle and contests with 89 seats Nupes – qualifying as first opposition – have already said they will not support what they stress would be an “alliance against nature”.

- Advertisement -
Share
Facebook
Twitter
Pinterest
WhatsApp
Previous articleIt’s the “reincarnation of God”: a baby is born with four arms and four legs
Next articlePope Francis on old age: “At this age I laugh at myself and move on”