The First Minutes Are Crucial: Disaster Guards Explain How You Can Protect Yourself In The Event Of A Nuclear Blast 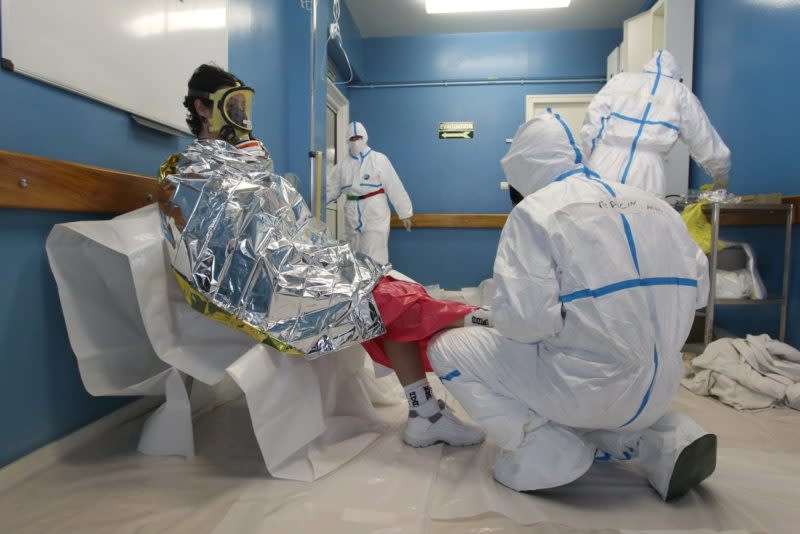 Russian President Vladimir Putin put his deterrent weapons on high alert on Sunday (Feb 27), raising fears of a nuclear war. Experts currently believe that this is highly unlikely to actually happen, but the threat must be taken seriously.

“I’m definitely concerned,” Irwin Redlener, a Columbia University public health researcher and disaster risk reduction specialist, told Business Insider. “Sometimes we tend not to give too much weight to statements like this, but in the face of a rather unpredictable Vladimir Putin, who has made good on his threats to attack Ukraine, we have to take his statements on nuclear weapons seriously.”

Nuclear weapons expert Hans Kristensen classifies the situation as follows: “It’s verbal saber rattling,” he told the New York Times. Matthew Kroenig, who also researches nuclear weapons, tells the newspaper: “Nuclear-weapon states cannot wage nuclear war because they would risk annihilation, but they can and do threaten it.” It’s a kind of game to increase the risk of war, “in the hope that the other side will back off and say, ‘My God, it’s not worth fighting a nuclear war.'”

According to the Swedish Peace Research Institute Sipri, there are about 15,000 nuclear weapons in the world, distributed among the nine nuclear powers: India, France, Great Britain, Pakistan, China, North Korea, Russia and the United States. According to Sipri estimates, Russia has about 6,257 nuclear warheads. This makes it the country with the largest nuclear arsenal in the world, followed by the United States with around 5,500 nuclear warheads.

Russia’s nuclear arsenal is so extensive that it could strike almost anywhere. If a weapon were pointed at the US, local residents would have 30 minutes or less to protect themselves, provided they were immediately warned of the attack. “There wasn’t even time to get the kids out of school,” says disaster expert Redlener.

The first minutes and hours after a nuclear explosion are a crucial window of opportunity. According to the Johns Hopkins Center for Health Security, the risk of radiation exposure decreases by 55 percent one hour after the explosion and by as much as 80 percent after 24 hours.

During the first 30 minutes: protect the eyes and face

In 2018, the Hawaii Disaster Relief Agency mistakenly sent a last-minute message to people’s smartphones warning of an impending ballistic missile. “Go to the shelter immediately. This is not a test,” the message said. An employee of the authority had accidentally sent the warning. “That led to chaos,” says Redlener. “Some people ignored the news completely, while others panicked and hid in the sewers with their children.”

According to Redlener, the most reliable source for a nuclear warning is television or radio. Sirens could alert people who don’t have direct access to the news, but the sound could also create confusion. By the time the reason for the alarm was found on the Internet or with the police, it was already too late, says Redlener.

The US health agency also recommends lying on your stomach on the ground and tucking your hands under your body to protect yourself from flying debris or scorching heat that could cause burns. If you have a scarf or bandana with you, you should cover your mouth and nose with it. However, it is important to keep your mouth slightly open to equalize the pressure on your eardrums.

In the first 45 minutes: move to shelters

A single nuclear weapon could cause tens of thousands of immediate deaths in a large city like New York or Washington. The number of casualties depends on the size of the weapon and the location of the explosion.

Survivors would have about 15 minutes before the dust-sized nuclear particles, also known as atomic dust, hit the ground. Exposure to this atomic dust can lead to radiation poisoning, which in turn can damage cells in the body.

If possible, seek shelter facing away from collapsing buildings. “It’s important not to go in the direction the wind is coming from,” says Redlener. “Run as far as you can for 10 to 15 minutes, then seek shelter immediately before the radiation cloud has a chance to descend.”

The best shelters are buildings like schools or office blocks that have few or no windows and a large basement. If there are no such buildings in the immediate vicinity, it is better to take shelter somewhere indoors than to be outside.

If you are in a multi-story building, you should stand in the middle of the house and stay away from upper and lower floors and all windows to protect yourself from flying glass.

In the hours after an explosion, radiation exposure should be minimized. While doctors can treat radiation injuries with drugs like potassium iodide, “there are certain levels of exposure that you can’t do anything about,” says Kathryn Higley, a professor of nuclear sciences at Oregon State University.

Also, in the worst case, there may not be enough doctors or hospital beds. “There are not enough ICU beds in the entire United States to treat the victims of a single city nuclear attack,” said Tara Drozdenko, director of the global security program at the Union of Concerned Scientists.

Those who were outside during the blast should shower, ideally with warm water and mild soap, as soon as possible. Vigorous rubbing can break down the skin’s natural protective barrier. You should also cover any open areas and small wounds while you shower.

In an emergency, products such as conditioners, body lotions, or face creams should not be used. These can be deposited on radioactive particles and bind them to your body.

Blow your nose and clean your ears and eyelids, otherwise dirt could collect there. It is also recommended to pack the outer layers of your used clothing and towels in plastic bags.

Food from sealed containers, such as cans or bottles, is safe to eat. In addition, you can also prepare food from the pantry or the refrigerator if you first clean all surfaces and utensils. However, unpackaged foods, such as fruits and vegetables from the garden, should not be eaten.

Unless there are other regulations, you should not leave the house until the risk of contamination has decreased. The US health agency recommends staying indoors for at least 24 hours.