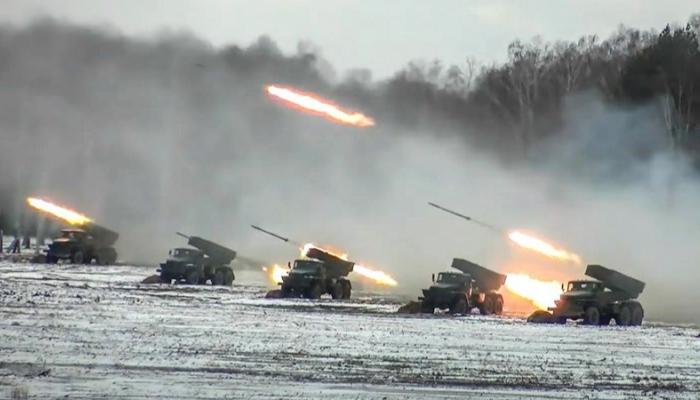 The Russo-Ukrainian war in 2022 is not only a major geopolitical event, but also a geoeconomic turning point.

The sanctions imposed by the West against Russia are the most severe measures ever imposed against a country of Russia’s size and power and damage the international economy as a whole and may lead it into recession traps, according to a report issued by Foreign Policy. magazine.

In less than 3 weeks, the United States and its allies isolated the main Russian banks from the world financial system; While prohibiting the export of high-tech components in agreement with its Asian allies; He also seized the foreign assets of hundreds of wealthy Russians; In addition to canceling trade treaties with Moscow.

Additionally, Russian airlines are banned from North Atlantic airspace, with restrictions on sales of Russian oil to the US and UK; All foreign investments in the Russian economy were excluded from its jurisdiction; It froze about $403 billion of the Russian Central Bank’s $630 billion in foreign assets. What is known as the decoupling process of the eleventh largest economy in the world from the globalization of the 21st century.

But the question that puzzles many now is how will these historic measures end and economic sanctions achieve their goals?

Western policymakers often assume failures stem from weaknesses in sanctions design, but in reality the reasons may run deeper: sanctions may have loopholes, a lack of political will to implement them, or insufficient diplomatic agreement. regarding your application.

Western sanctions now face a different kind of problem: they can fail not because of their weakness but because of their enormous and unpredictable strength. Accustomed to using sanctions against smaller countries cheaply, Western policymakers have only limited experience and understanding of the effects of tough action against a major globally interconnected economy.

With the current fragility of the world’s economic and financial structure, such sanctions certainly have the potential to cause serious political and material repercussions.

The severity of the current sanctions against Russia can be seen in their effects around the world. Perhaps the immediate hit will be for the Russian economy, as economists expect Russia’s GDP to shrink by at least 9 to 15 percent this year, while the ruble has fallen by more than a third since early January.

An exodus of skilled Russian professionals is now taking place, while the ability to import technology and valuable consumer goods has drastically decreased. As the Russian political scientist Ilya Matveev put it, “30 years of economic development have been thrown away.”

But the problem now is that the repercussions and effects of Western sanctions extend beyond Russia itself.

The Foreign Policy report points to at least four different types of broader impacts: indirect effects on neighboring countries and markets; multiplier effects through divestment from the private sector; the effects of escalation in the form of Russian responses; and systemic effects on the world economy.

Spillover effects have already caused turmoil in international commodity markets. A general panic broke out among traders after the second package of Western sanctions, which included the curtailment of SWIFT and the central bank’s reserve freeze announced on February 26.

Because the war closed Ukrainian ports and international companies prevented exports of Russian products, shortages of grain and minerals now loom over the world economy. Although oil prices have since fallen in anticipation of additional production from Gulf producers, the impact on energy and commodity prices in general will drive global inflation. In fact, African and Asian countries that depend on food and energy imports face serious difficulties.

Central Asian economies are also caught up in the impact of sanctions, while former Soviet states are closely linked to the Russian economy through trade, as the collapse of the ruble has caused serious financial problems in the region.

Kazakhstan imposed exchange controls after its tenge currency fell 20 percent in the wake of Western sanctions against Moscow; Tajikistan’s currency had a similar value.

The official sanction packages had a stimulating effect on international companies operating in various fields in Russia. Almost overnight, Russia’s impending isolation triggered a mass exodus of those companies in what amounts to a major private-sector boycott of Russia.

The commercial decline due to the migration of these companies has also deepened the economic shock to Russia by multiplying the negative economic effects of the official sanctions imposed on the State.

For its part, the Russian government responded to the sanctions in several ways. It has taken emergency policies to protect foreign exchange earnings and support the ruble. And while the stock market remained closed, the assets of many Western companies that have left could soon be seized.

Russia could retaliate by restricting exports of important minerals such as nickel, palladium and synthetic sapphire, which are crucial inputs for the production of electric batteries, catalytic converters, telephones and microchips.

And if the economic war between the West and Russia continues until 2022 with this intensity, it is very likely that the world will fall into a recession due to sanctions.

Some question the reason for the widespread economic effects on the global economy as a result of these sanctions, which had not happened before. Lawmakers in the United States generally imposed sanctions on economies that were modest enough in size to contain any significant negative effects. as the degree of integration in the global economy was North Korea, Syria, Venezuela, Myanmar and Belarus are relatively modest and one-dimensional.

The answer here lies in two basic elements: the first is that the sanctions are broader in scope and were imposed on a larger and more influential economy in the global economy. The Biden administration is aware of this problem, but its actions so far are insufficient to mitigate the effects of the sanctions.

In fact, Washington tried to reduce pressures in the oil market through a partial reconciliation with Iran and Venezuela, but this is not enough to meet the challenge posed by Russian sanctions, the effects of which exacerbate already existing economic problems as a result of problems such as the effects of the Corona pandemic and supply chain problems.

The problem of managing the fallout from economic warfare is even greater in Europe given that the European Union has much stronger trade relations with Russia. Furthermore, as a result of the nature of the economy in the Eurozone, which has been shaped over the last two decades, the strategies of most economies in the region are heavily trade-based, focused on exports and a structure that it is unable to impose long-term sanctions to limit trade.

Despite European attempts to absorb the effects of the sanctions by increasing investment in renewable energy at EU level and expanding public oversight in the energy sector, there is also an urgent need to take more action to counter rising prices. to the consumer and encourage national markets.

Then there are the consequences of sanctions for the world economy as a whole. Therefore, it is imperative that the Group of Seven, the European Union, and the United States’ Asian partners take bold and coordinated action to stabilize global markets.

This can be achieved through targeted investments to remove supply bottlenecks, generous international grants and loans to developing countries struggling to secure adequate food and energy supplies, and large-scale government financing of renewable energy.

It would also have to include subsidies, and possibly rationing and price controls, to protect the poorest from the devastating effects of rising food, energy and commodity prices.

The report sees such concessions and decisions as the price to pay as a result of the West’s involvement in economic warfare.

He added that inflicting material damage of this magnitude against Russia simply cannot be carried out without an international shift in policymaking that provides economic support to those affected by sanctions, warning that failure to protect the material well-being of families , political support for sanctions will collapse over time.

The report argues that Western policymakers must decide whether to support sanctions against Russia with their current strength or to impose further economic sanctions on Putin.

He explained that if the goal of sanctions is to exert maximum pressure on Russia with minimum disruption to their economies, and thus a difficult risk to control, then the current levels of pressure may be the maximum possible now.

The report noted that, for the time being, simply maintaining the current sanctions would require active compensatory policies, both for the affected countries and for the members of Western society affected by the sanctions.

No matter how strong and justified the West’s determination to stop Putin’s aggression may be, politicians must accept the material truth that an all-out economic offensive will put significant new strains on the global economy.