The fires of the Ukrainian Odessa… Riots or flames of war? 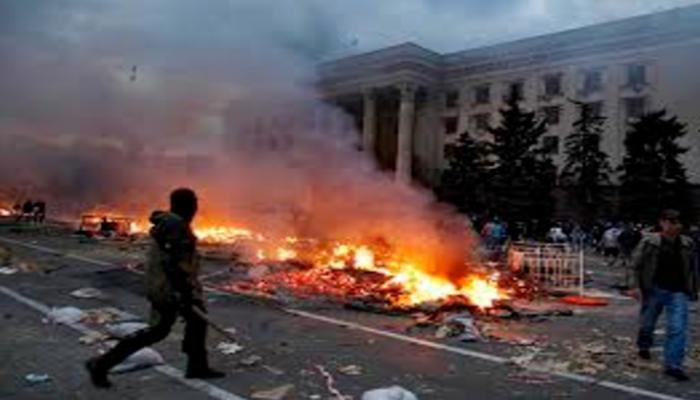 The fires in the Ukrainian neighborhoods of Odessa and the chaos and destruction are said to have been caused by a Russian bombardment of the strategic city.

Images that have swept social media over the past two days, appearing in particular on Arabic pages and accounts, accompanied by comments describing the devastation caused by Russian bombardment.

But the “Agence France Presse” news investigation service confirmed that the images were related to the protests in the city on the shores of the Black Sea in 2014 and had nothing to do with the current conflict.

The number of attached images varies between different posts, while some pages and accounts were content to post an image of a man walking between the bonfires, other pages added images similar to each other by depicting a state of chaos and fire burning. in the neighborhoods of a city.

These photos were accompanied by comments stating that they show the city of Odessa in light of the Russian attack on Ukraine, which has been going on for a month, to exaggerate comments condemning the attack on the city.

But in fact, media reports say that in recent days, Odessa has become a fortress in anticipation of a Russian occupation attack, especially since it constitutes a strategic and symbolic target for Moscow.

Before the war, Odessa had a population of about a million, but the conflict forced tens of thousands to flee, according to local authorities.

The secret in history.

The Russian war against Ukraine has been a source of sustenance for fake posts that base false comments on photos taken in different contexts or places unrelated to the ongoing conflict.

An inspection of these images on search engines revealed that they were posted in 2014 on media and agency websites.

Two of the photos distributed by Reuters were taken in the wake of the protests and riots that killed dozens of people in the city eight years ago.

As for the third image, a Ukrainian website posted it at the same time, accompanied by an article about the violence the city experienced at the time, which means that all the posts have nothing to do with Odessa now or with the Developments of the Russian War.