The fires are spreading in Castilla y León, Catalonia and the Valencian Community 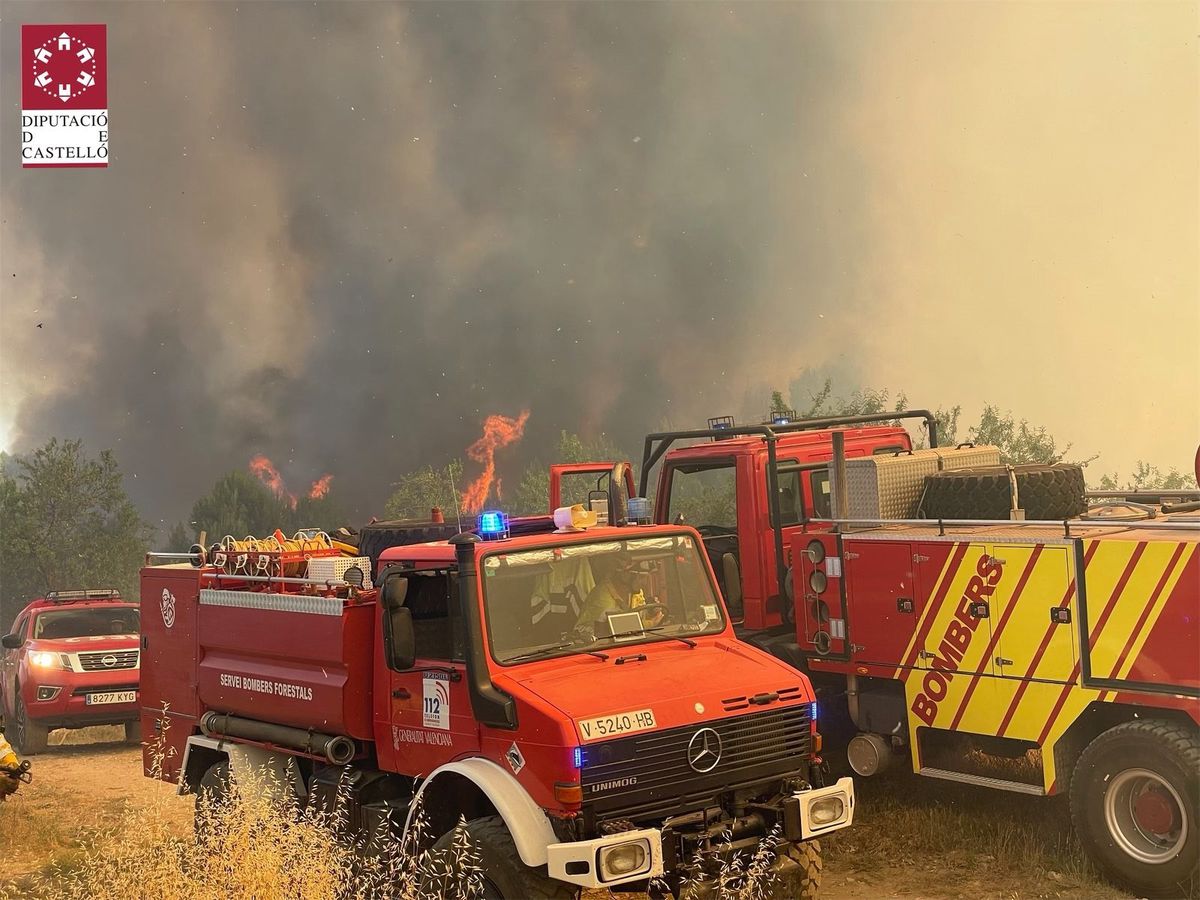 The fires continue to punish several communities in a new day of intense heat across the peninsula. The fire in the Sierra de la Culebra in western Zamora province is still active after forcing the evacuation of residents from 14 towns, whose combined population totals more than 1,700 people. About 11,000 hectares have been charred and the National Road 631 remains closed.The weather forecast, even with the temperatures and the extreme drought of the heat wave that will particularly punish the Ebro Valley and the eastern half this Saturday, is not encouraging for the extinction of this one Fire or for some more still active in other parts of Spain, like Lleida or Castellón.

On Friday night, the fire threatened the area of ​​the El Casal farm, which belongs to the Junta de Castilla y León, the land with the highest ecological value in the Sierra de la Culebra Zamora post office. The fire has mainly devastated areas with pine forests, scrubland and scrub. Corresponding Ministry of the Environment of Castilla y León“The weather conditions expected throughout the day remain adverse, with heat and wind still very present”.

The fire has led to the evacuation of 14 places and about 1,000 people in Cabañas de Aliste, Torres de Aliste, Pobladura de Aliste, Mahíde, Palazuelo de las Cuevas, San Pedro de las Herrerías, Boya, Villardeciervos, Villanueva del Valrojo and Ferreras de Arriba , Ferreras de Abajo, Codesal, Cional and Flechas de Aliste. The night, as the ministry said, allowed some optimism: “The fire is less virulent at this time and the height of the flames has decreased in some areas.” reinforced with the air teams acting on the more than 11,000 hectares, according to official information from the Board, although the estimates of the firefighters who are acting on these locations indicate a much greater extent of this level 2 out of 3 fire that occurred on this one Wednesday was caused by lightning to affect roads and haunt places like those evacuated.

This biosphere reserve, with a significant presence of wolves and deer, is suffering from the ravages of the heat and the lack of foresight by the board. Weather wise, the recent 40 degree temperatures have parched an area that has been without rain since the winter and has become the perfect tinder for a fire of this magnitude, compounded by strong winds. The Board has activated a “moderate” rather than high hazard plan despite the environmental circumstances, requiring fewer resources to deal with this or any other disaster in the area. The shortage of brigades was supplemented with help from the Ministry of Defence-dependent Military Emergency Unit based in León, as well as help from firefighters from Portugal and other border communities. The President of the Autonomous Community, Alfonso Fernández Mañueco (PP), traveled to the vicinity of the flames this Friday and attributed what happened to “climate conditions probably unique for decades”, without referring to the regional plan, which is not working at full capacity . This forest fire comes less than a year after further devastation in Navalacruz (Ávila), where more than 20,000 hectares were charred in a fire that broke out after a car caught fire on a provincial road.

The desolation overwhelms one of the forest firefighters who intervened in the extinguishing and who requests anonymity. “Half of the checkpoints are active, there are many who are assigned and only have a contract in July because they are subcontractors and the companies do not advance money until the board pays it out,” develops the professional who criticizes the stage ” high risk” because it avoids deploying more crews or paying more guards. The firefighter regrets that the omens are terrible: “My colleagues tell me that around 14,000 hectares have burned, the entire Sierra de la Culebra will burn.” One of the agents who worked in the area tonight and who asked not to be identified, reiterates that the backfire tactic worked and secured some areas, although he doesn’t know what the general situation is: “What we did at night, is affecting us I have yet to finish and this area will be safe.” The specialist claims that due to staff shortages, some patrols have been extinguishing flames non-stop for more than 12 hours in a dangerous area that is already causing damage to at least one colleague have inflicted.

The tension can be seen in the voice of Vanesa Mezquita, mayor of San Vitero (PSOE), one of the cities in Zamora that is close to hell. The City Council spoke to the deployed firefighters and reiterated that they express their inability to work due to missing hands: “They tell me that they are not human, they cannot cope because the protocol is not activated and that it is impossible .” Mezquita stocks up on sandwiches and water to feed the teams, who have little room for communication because “a tower burned down three days ago and there’s hardly any signal or internet”. The Zamorana marred the “disorganization, apathy, and abandonment” of the woods due to lack of care. Lorenzo Jiménez, Mayor of Villardeciervos and Cienal (PP), reiterates that the Sierra de la Culebra “represents an enormous ecological disaster with our wolf as an economic, social and moral reference”. The cities he manages, he adds, are “in perfect condition” because the flames have hardly entered the cities, there are destroyed roads and a lot of smoke: “It’s a shame to see it that way, it’s my goal to save it as soon as possible so that future generations can enjoy this paradise ”

Meanwhile, other fires are still active elsewhere in Spain, particularly in the eastern half, which is set to suffer its worst day of the heatwave this Saturday, with temperatures expected to top 40 degrees. Several fires remain active in Catalonia. In an interview collected by Europa Press on Channel 324, the Director General of Prevention, Firefighting and Rescue, Joan Delort, stated that the Generalitat firefighters were working on 11 fires this Friday evening, five of which were active, and has insisted that where you now allocate “more effort and more resources” is Artesa de Segre. In the city of Lleida, the chief of operations of the Generalitat fire department, Miquel López, explained that about 70 ground crews are working this Saturday morning on a fire that affects about 1,500 hectares and that he excludes that this fire can be extinguished Saturday. In statements to the media, he detailed that troops are now concerned that a southerly wind expected between 12 and 13 hours is blowing in and that this would change the behavior of the fire that has been active since Wednesday. He also explained that troops are now focusing their efforts on creating a “discontinuity in territory” on two flanks of fire before that wind comes from the south. The resources destined for the fire of Lladurs, also in Lleida, were directed to Artesa and other points stabilized at night after about 50 hectares were destroyed, he explained.

Two aircraft were installed in Caudiel (Castellón) this Saturday morning to fight the fire declared on Friday afternoon. You join an operation involving four units of the Generalitat forest fire brigade, four fire engines, five crews of the Fire Department of the Diputación de la Castellón and a unit of the Military Emergency Unit (UME). The fire broke out next to the Sagunto-Teruel railway tracks and soon forced residents of the town of about 660 to evacuate to their homes due to the proximity of the fire and confine others in their homes due to smoke. The regional secretary for security and emergencies, José María Ángel, said on Friday evening that all resources would be concentrated on the right flank due to the wind development. During the night there were 14 crews from the Castellón Fire Consortium, seven forest firefighting units from the Generalitat, four firefighting crews from the Valencia Consortium and the Military Emergency Unit (UME), which keeps its 40-strong section operational.