The fires are devastating almost 20,000 hectares in Galicia alone 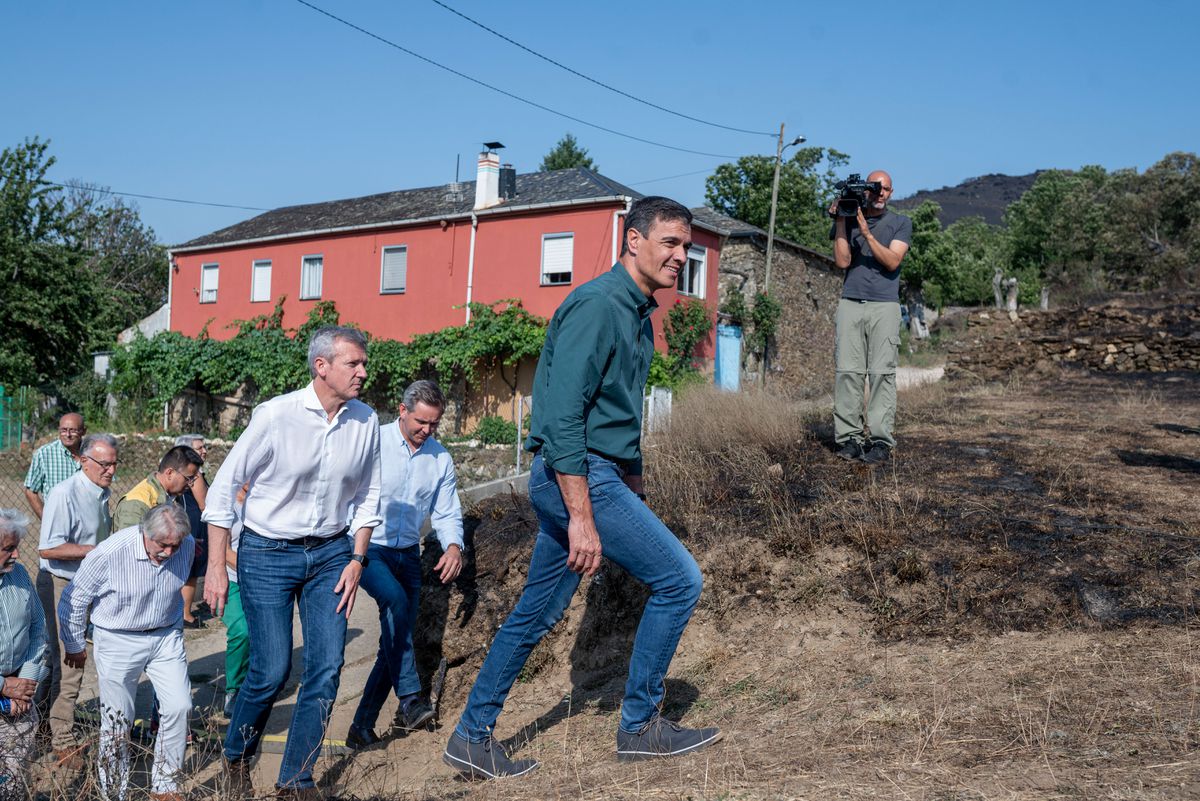 The fire, which is sweeping much of Galicia, has charred nearly 20,000 hectares in a total of 16 fires recorded since last Thursday, according to initial estimates. Prime Minister Pedro Sánchez on Tuesday visited Alixo, a parish in the municipality of O Barco de Valdeorras, in the municipality of Ourense, where a single fire has devastated more than 7,500 hectares. From the city of Ourense, Sánchez asked citizens to be “calm” and “cautious” because “difficult days remain” with an increase in heat in Galicia and throughout Spain. “The weather forecasts indicate an increase in temperature throughout the peninsula,” warned the head of the executive branch, also recalling the heat wave suffered “in this difficult month of July”.

The Xunta has reported this Tuesday that there are still nine active fires of more than 20 hectares and in three of them Situation 2 has been declared as precautionary due to proximity to population centers, forcing the evacuation of houses. The largest fires are between Folgoso do Courel and A Pobra do Brollón (Lugo), where 4,900 hectares burned; the one that started in the municipality of Seceda, also in Folgoso do Courel, with 1,100 hectares; and in Carballeda de Valdeorras, which has already affected 7,500 hectares. The other active fires are in Palas de Rei, in Cervantes (both in Lugo), in Oímbra and one in Vilariño de Conso (both in Ourense), affecting 2,750 hectares in the Invernadeiro Natural Park. A thousand soldiers, 100 motor pumps, 20 shovels and 30 aircraft are working to put out these fires.

During a speech to the media in O Barco, Sánchez emphasized that climate change is “a fact” and “deadly”, not only in terms of loss of human life, but also in environmental, social and economic terms. For this reason, the District President has called for environmental policy to become a “state policy” that “overcomes” all administrations. In that spirit, he recalled that last week during the State of the Union debate in Congress he announced a new basic government framework to regulate firefighting and prevention personnel: “It’s important that we do it.” The Prime Minister traveled to O Barco on Tuesday to visit the Forward Fire Control Center in Viloira. He then drove to the parish of Alixo, where the flames consumed fifteen houses, among other buildings, on Sunday and Monday, and was able to exchange a few words with some of the affected neighbors.

Sánchez was accompanied by the President of the Xunta de Galicia, Alfonso Rueda, of the PP, who has promised that “as soon as the essential happens”, namely to put out the fires, he will offer “immediate” help to the residents of the areas affected by the fire, the be approved this Thursday in the regional government council. “I am sure that the president of the central government will also be up to the task of helping the people,” he added. This is what the Galician President said after accompanying Sánchez and the Minister for Ecological Transition, Teresa Ribera, during his visit to the municipality of Alixo.