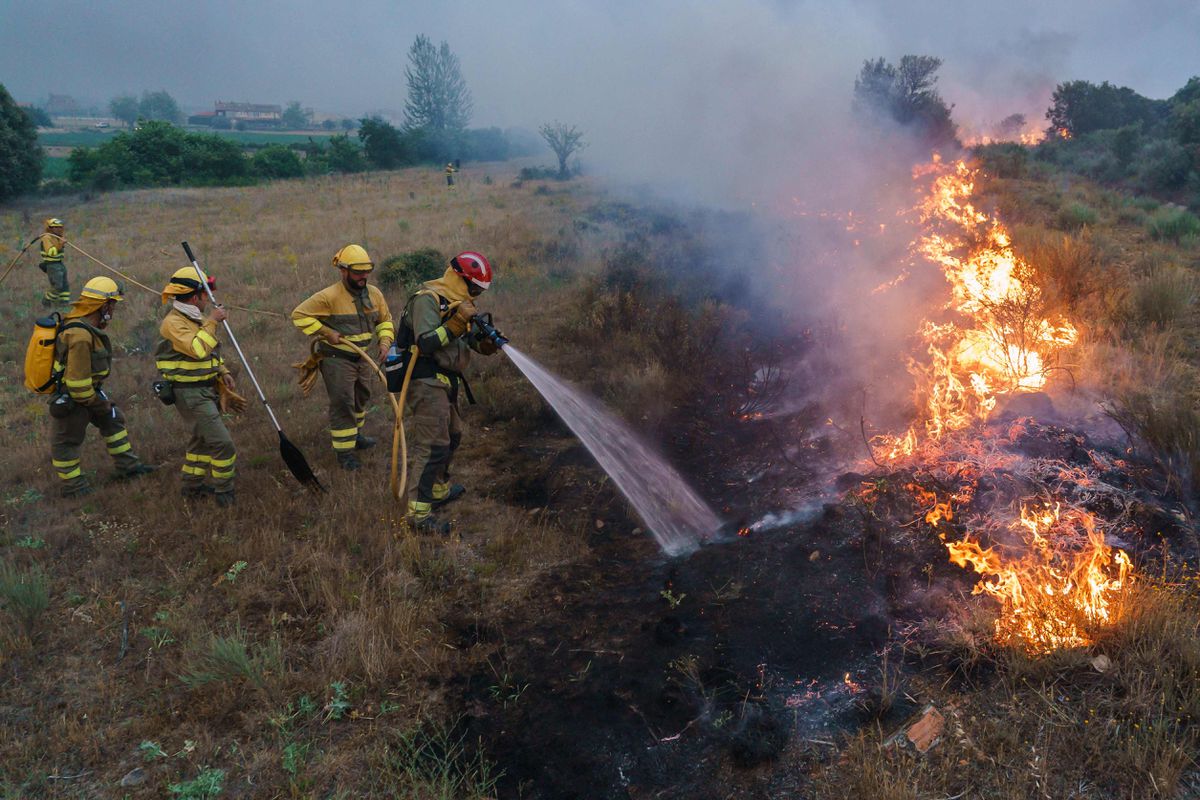 The insatiable fire ravaging the Sierra de la Culebra in Zamora is beginning to recover. The drop in temperature at night, the wind slump and some showers have allowed the flames to be contained, the residents of most of the 18 displaced populations to return to their homes and the roads closed to traffic to reopen (including the national lines 631 and 525) and the AVE line between Madrid and Galicia. The fire is gradually being brought under control after burning more than 25,000 hectares in the area, a well-known biosphere reserve visited to see wolves. Of these, about 15,000 are forested. However, the active fronts are “without a flame”, and work is being done to cool and stabilize the nearly 70-kilometer perimeter. Meanwhile, the fires are complicated in Navarra, where fifteen towns have been evacuated in the past few hours and have had to provide personal assistance from Euskadi and La Rioja, as well as from the military emergency unit. The Navarra government considers the situation to be “very critical”. In Catalonia, the firefighters, who had to spread over 30 fires at the same time, are also waiting for wind on the fifth day of firefighting.

The change in weather conditions around the Sierra de la Culebra has allowed night work on the affected perimeter and the return of the population of the evacuated places. The experts emphasize that one of the keys is that the wind, which once blew very dryly with gusts of up to 70 kilometers per hour, has abated. The residents of the villages have returned to their homes, which have not suffered any material damage, for fear of contemplating the surrounding forests and confirming the natural disaster they have suffered.

The fire in the Sierra de la Culebra has reached a circumference of more than 67 kilometers and turned around 25,000 hectares of pine forest and scrubland into grazing land for the flames

View images of the fire in the Zamora Mountains, where several cities engulfed in flames had to be evacuated

The President of the Junta de Castilla y León, Alfonso Fernández Mañueco, has announced that the active fronts of the fire in the Sierra de la Culebra are “without flame” and that work is now “focused on securing, cooling and stabilizing the entire fire ” concentrate perimeter to avoid the serious danger of reproduction in the event of a possible return of strong winds and adverse conditions. A total of 20 aircraft joined the work to secure and cool the perimeter.

Renfe has reported the resumption of rail traffic on the AVE line Madrid-Galicia after Adif was able to reopen this Sunday around 10:30 a.m. this rail line, which was affected by the fire in the Viper mountains on Saturday afternoon. After the opening, the high-speed trains connecting Madrid and Galicia will gradually run on this line, according to railway company sources.

The Environment of Castilla y León classified the fire risk as “medium” until July 1, reducing brigades and operational resources. The head of this ministry, Juan Carlos Suárez-Quiñones, asserted in 2018 that “maintaining firefighting operations year-round is absurd and, moreover, wasteful”. The Junta de Castilla y León has come under harsh criticism since a fire caused by several lightning strikes on Wednesday afternoon, as this area of ​​Zamora, in the west of the province, largely thrives on its ecological value for rural tourism and the observation of wolves living in this Land is plentiful and the operations of several agri-food companies that rely on the natural resources that the land offers them.

Almost from the start of the fire, the Board requested the intervention of the Military Emergency Unit, accompanied by professionals and media from other Autonomous Communities. Thus, several firefighters with whom EL PAÍS spoke and who ask to remain anonymous, have criticized the defenselessness and lack of troops to deal with this natural disaster, which the Board has classified as level 2 out of a maximum of 3, in this case it should be the government intervened, despite being uncontrolled for several days, becoming the most devastating fire in the history of Castilla y León. Vanesa Mezquita, Mayor of San Vitero (PSOE), insists that the situation remains “bad, fatal” and also criticizes the regional authorities (PP-Vox) for not changing the status of the fire: “I understand not why they don’t declare level 3 and all come here”.

The mayor of Villardeciervos, Lorenzo Jiménez (PP), explains that his neighbors have already returned to their homes and that after the devastation, a window of hope is now opening: “We are at home, the city is fine, the ashes remain cleaned . It’s a lot less hot and it’s good for the fire not to multiply, it rains sometimes and it helps prevent the embers from sprouting, things are changing for the better, I appreciate the work of the media and the neighbors.”

In the last few hours, more than fifteen towns in Navarre have had to be evacuated due to the proximity of several fires. The fire partially affected several population centers such as those of Valtierra, Arguedas, Obanos and Puente La Reina areas, but no injuries were caused. Efforts are currently focused on the Sierra de Valdorba, the Arguiñáriz area, the Sierra de Codés and the San Cristóbal area near the Pamplona region.

The vice-president of the Foral government, Javier Remírez, has explained in detail that the situation “remains extremely critical” and that large areas of land have burned, although the situation “did not develop any further last night.

At this point, all the available resources of the Autonomous Community continue to work to extinguish the fires, together with the troops and material resources of the governments of Spain, Basque Country, Aragon, La Rioja and the Military Emergency Unit. There are eight ground air bases in total.

The forecast is that the next few hours will continue to be very complicated due to the high temperatures, the dryness of the terrain and the gusts of wind for which the National Meteorological Office maintains the extreme risk of fire throughout the municipality for today. On the other hand, Navarra will keep level 2 of the Contingency Plan and Territorial Civil Protection Plan activated. In practice, this means the ban on agricultural work that involves the use of machines that pose a risk of generating sparks or electric shocks until next Wednesday.

Likewise, from the Executive, they ask citizens to reduce their movements through the territory of Navarra to a minimum, to ensure that the roads for the circulation of emergency equipment are as free as possible. In addition, the pilgrims doing the Camino de Santiago have been asked to stay in the shelters to avoid dangerous situations, since yesterday afternoon’s fire forced the evacuation of several towns through which the pilgrimage route passes. Street. I know The causes of the fire and the extent it affected are unknown for the time being.

Generalitat firefighters face the fifth straight day of simultaneous fires in Catalonia this Sunday, in a context where the heat wave has ended and temperatures have dropped but the forecast indicates an increase in winds. Meanwhile, the troops are accumulating many days of an extremely complex situation: on Saturday there were 30 fires in various places. The fire in Badomar-Artesa de Segre (Noguera) is still active and a third has been declared in Horta de Sant Joan (Terra Alta), which has been stabilized. The one declared on Saturday afternoon in Olivella (Garraf) is also stabilized.