The final fight against the Boixos Nois: Keep them away from the stadium 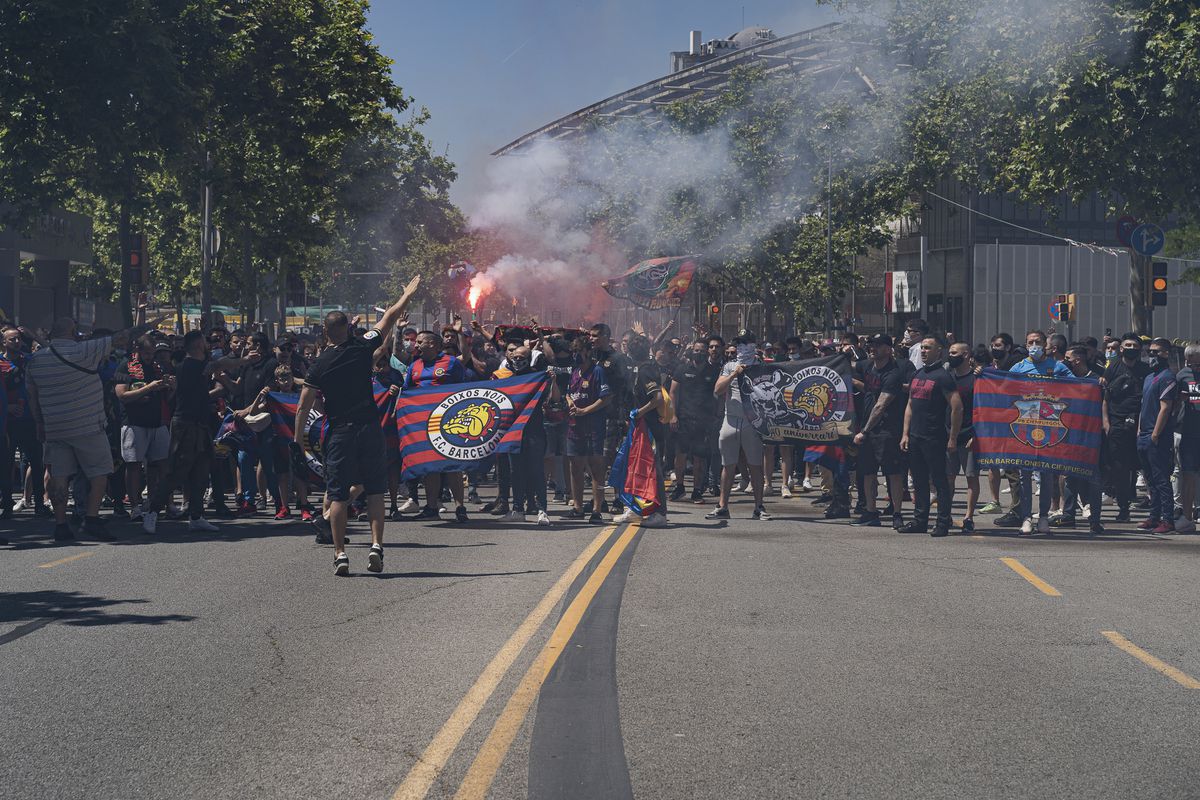 The Mossos d’Esquadra have exported the techniques they used to fight repeat offenders in the Barcelona metro to the Boixos Nois, radical Barça fans. As soon as they are arrested for an act of violence, they submit a report to the judge and the prosecutor describing the accused’s past, their connection to the radical group and their design of the Camp Nou area, where they are forbidden to enter . their particular battlefield. Just as they obtained injunctions from the Barcelona Metro at the time, a judge has now issued the measure for four people Boixos accused of assaulting an Eintracht Frankfurt fan on April 14. You must not come closer than 1,000 meters to the stadium.

“They have made the Camp Nou area their fiefdom, their tribal territory. And it’s hard to control,” lament police sources specializing in the fight against radicals in sport. They trust the new measure will reduce incidents that terrify Barça fans and local residents. “They organize patrol groups around public transport access points to find competitors. They territorialize the area around the pitch in such a way that the neighbors try not to leave their houses two hours before the game,” they complain. Now, if any of the four suspects with restraining orders come within 1,000 meters of the Camp Nou, the Mossos will immediately arrest him for violating a court order.

The groundbreaking measure in football applies to four of the six arrested in the April 14 incident, in which fireworks were set off against police cars in addition to attacks on Eintracht fans. The six arrested add up to more than 100 police arrests. The one with the most collects 28, followed by 27 in the second and 24 in the third, according to police sources. The Mossos arrested the sixth suspect awaiting trial in El Vendrell yesterday, Monday.

The Boixos Nois ended last season with a series of incidents near the Camp Nou – where most of the fighting and confrontations have taken place since they were banned from the stadium – leaving the Mossos d’Esquadra fearing the worst goals of the resumption of football activities. It started on November 23 when various Benfica fans attacked the El Sabroso bar, one of the hangouts of the radical Barça group, terrifying local residents. Boixos Nois took revenge on November 28 by attacking a traditional Espanyol fans’ bar, Los Cazadores, for accusing one of them of taking part in the attack on theirs alongside Benfica fans.

On March 10, they were seen again in an unusual attack on police forces. various hooligans They fired pyrotechnics at the gates of the Camp Nou, aimed at the Brimo vans, the Mossos riot police. The footage, police sources explain, was intended for Galatasaray fans but, being prevented from meeting with them, they threw it at the police. In addition, hidden in some bushes of some gardens in the area, the Bacardi Gardens, the Urban Guard found some homemade spears made with wooden sticks and knives and tied at the tip. According to police sources, the intention was to use them against the opposing team as well. UEFA fined Barça 10,000 euros for these incidents because they happened near Camp Nou.

The last of the episodes took place on April 14 against Eintracht fans. One of them required different stitches. There were also repeated clashes with the police. In this case, the Mossos managed to contact the victim in Germany, who eventually explained what had happened, facilitating the arrests.

Los Boixos has been enjoying a resurgence since before the pandemic. Without an audience in football during confinement, they staged clashes against the closure of nightlife in central Barcelona at a demonstration on October 30, 2020. “They went hand in hand, knocked down fences against the Brimo and attacked the police units directly,” Mossos sources explain. Catalan police identified 17 participants in the attack who they claim were part of Boixos.

On November 2, the National Police arrested 14 people accused of being part of the group and of involvement in drug trafficking and inciting prostitution. The Mossos are also investigating some incidents, such as the attack on a local in Vilanova y la Geltrú. The most violent branch of Los Boixos, Los Casuals, collects court convictions for racketeering, assaulting other drug dealers and drug trafficking, among other things. A new branch of this faction has been particularly active in recent months, according to police sources.

Previous articleLes Merveilles: a musical? So the singing numbers fit into the reunion with Captain Marvel and Kamala Khan
Next articleThe women’s team and another barrier to break