The fifth deceased in the framework of the national strike is confirmed, this June 23 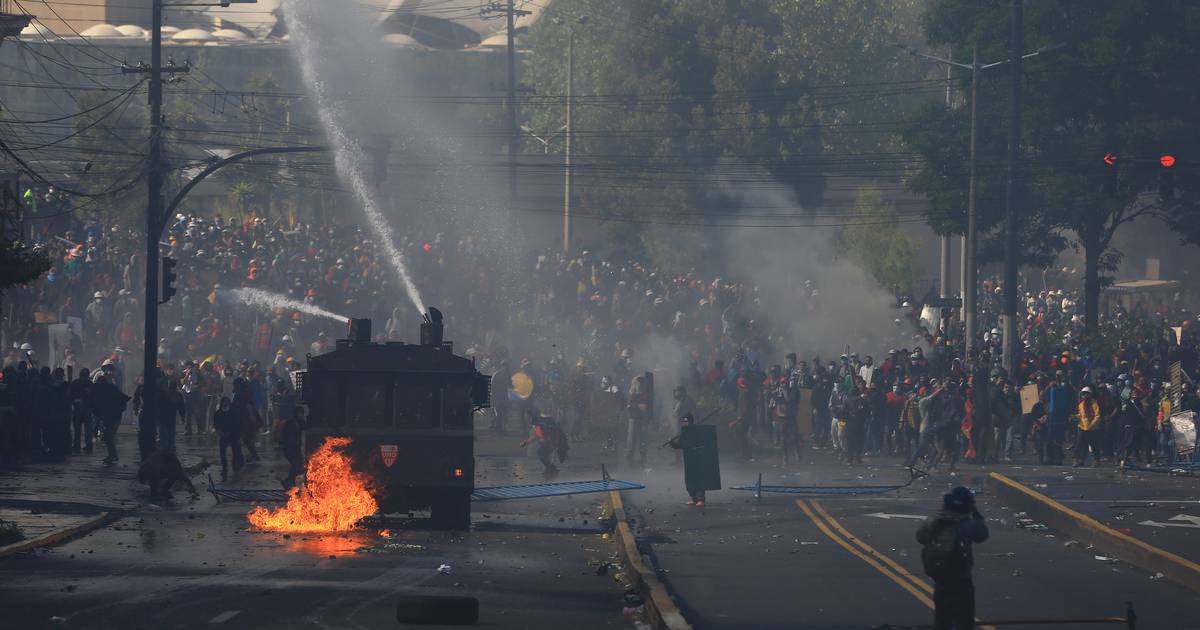 The day of clashes this Thursday, in Quito, as part of the national strike, left a fifth dead. According to Conaie, Henry Quezada Espinoza, 39, lost his life in El Arbolito Park, located a few meters from the National Assembly building.

In a tweet posted by the indigenous movement, the man died “as a result of penetrating trauma to the chest and abdomen caused by pellets”. Former students of Colegio Mejía and the Alliance of Human Rights Organizations posted the same.

The State Attorney General’s Office, in this regard, indicated that it had opened – ex officio – a preliminary investigation into Quezada’s death.

Quezada Espinoza is the fifth to die in the national strike. Three days ago, a man died after falling into a ravine in Guayllabamba, north of Quito. The body was rescued by members of the Quito Fire Department. The preliminary report says they identified three people who fell, two got away on their own, and the other had to be rescued, dead.

Guido Guatatuca, a Kichwa man from the San Jacinto commune, was the second to die. The Confeniae blamed the event on the government of the conservative Lasso. In the images posted on social networks, we see the young man lying on the ground with a prominent wound on his forehead and surrounded by a pool of blood.

However, the Police delimited their responsibility by declaring that the death was due to the handling of an explosive.

“It is presumed that the person died as a result of handling an explosive device,” the law enforcement agency said in a statement, adding that “it does not use explosives to control public order”.

The same police added that its agents act with respect for human rights and that they will contribute to the investigation that will be opened on this case.

Two other people died due to the obstruction of the passage of ambulances due to road closures and mobilizations. The events were reported on Sunday, June 19, according to the Department of Health.

The first case occurred when an ambulance transporting a patient from Esmeraldas to Quito, near Calacalí, was unable to continue its march because demonstrators were blocking its path. Given this, he had to return to the hospital; however, the person is deceased.

The second event occurred with an ambulance from Shushufindi (Sucumbíos), which went out to treat poisoning with unknown chemicals, on the road to Limoncocha. The vehicle could not move forward because the march

The center of Quito has once again become the scene of intense clashes between Ecuadorian police and demonstrators who, for the eleventh consecutive day, are taking part in demonstrations against the high cost of living and the economic policies of the government of President Guillermo Lasso.

This time, the unrest focused on El Arbolito Park. The incidents began after the government allowed the indigenous movement access to the House of Ecuadorian Culture, adjacent to the park to set up a popular assembly and policed ​​since Sunday to prevent the indigenous group from going there. arrive and rehearse the park scenes. 2019.

Entering this space was one of the conditions set by the indigenous leader and main promoter of the protests, Leonidas Iza, to accept the constant invitations to dialogue with the government made both by President Lasso and by numerous social and religious organizations.

The list of demands includes the freezing and reduction of fuel prices, the control of the prices of essential products, the non-privatization of public companies and the non-expansion of oil and mining concessions in the Amazon, among other points.

Metallica Drummer’s Son Appears in ‘Stranger Things’ Scene: Look Who He Is

Guitarist Carlos Santana faints during a concert in the United States