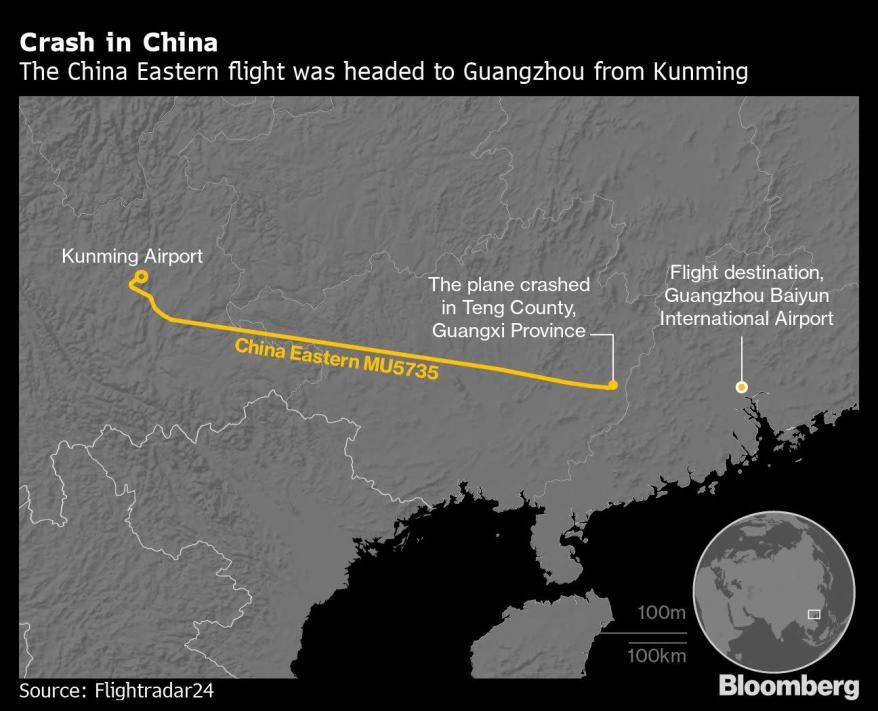 (Bloomberg) — The China Eastern Airlines Corp. plane was on its normal flight path to Guangzhou when it suddenly pitched forward at cruising altitude and began to dive. That’s all there is to know about the freak accident that killed all 132 people on board the plane on Monday, the worst accident in Chinese civil aviation in more than a decade.

There have already been accidents where a commercial airliner crashed from cruising altitude. But few, if any, took the extreme course of the Boeing Co. 737-800, which headed steeply toward the ground.

“It’s a weird profile,” says John Cox, an aviation safety consultant and former 737 pilot. “It’s hard to get the plane to do that.”

The machine’s flight recorders could provide clues as to why the plane crashed so abruptly. Investigators will also analyze the weather the plane was exposed to, looking for evidence of distress calls from the pilot and engine malfunctions.

Flight MU5735 was at an altitude of 29,000 feet (about 8,800 meters) about 100 miles from its destination, roughly the point where the pilots would begin their descent for landing, when the machine began to sink at a much faster rate than normal. .

Instead of gradually falling at a few thousand feet per minute, which is barely noticeable to passengers, the plane began to drop to more than 30,000 feet per minute in seconds, data recorded by Flightradar24 shows. In total, the plane fell almost 26,000 feet in approximately 1 minute and 35 seconds.

Then the dive appears to have broken for about 10 seconds and the machine briefly gained altitude, which is also very unusual. The aircraft then continued its steep descent. Flightradar24’s recording is based on radio transmissions from the machine.

Cox and Jeff Guzzetti, former director of accident investigation for the US Federal Aviation Administration, noted that the Flightradar24 data only provides preliminary information. However, the plane’s relatively straight flight path and the fact that the transponders were still transmitting indicate that the plane did not break up in flight, as might occur in an act of terrorism, for example.

A video that appears to capture the plane’s final moments shows it in a steep dive. Chinese internet outlet The Paper published the video, which is said to have come from surveillance cameras at a mining company near the impact. There was no independent confirmation of the recordings.

Previous sudden crashes from cruising altitude, such as an Air France Airbus that crashed into the Atlantic in 2009, have generally not shown the same crash speed. A similarly paced accident occurred in Indonesia in 1997; there, authorities ultimately concluded that the pilot had intentionally submerged.

Benjamin Berman, a former National Transportation Safety Board investigator who has flown the 737, points out that the 737-800, like other planes, is designed not to crash at steep angles. It probably would have required extreme effort on the part of a pilot, Berman says, or a highly unusual malfunction.

There are events that can trigger a dive, for example a pilot having a heart attack and then falling onto the control column or a stall. However, such failures are usually short-lived or there are simple ways for pilots to counteract them.