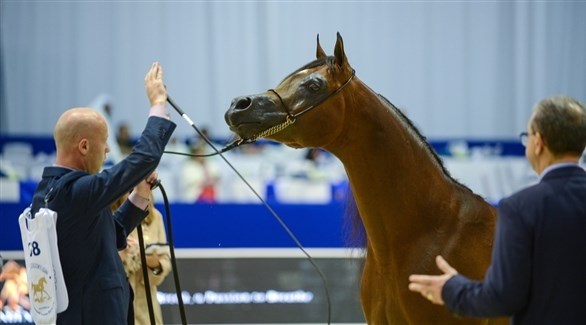 The 19th edition of the Dubai International Arabian Horse Championship, held at the Dubai World Trade Center, continues for the second consecutive day, with the participation of 150 horses, competing for prizes valued at 4 million dollars.

The second day of the preliminary qualifying rounds for the main tournaments witnessed exciting competitions between all the participating horses, especially with the convergence of the points difference.

In the details of the competitions on the second day, “Nesma Al-Hawajer”, belonging to Sheikh Mohammed bin Saud Al Qasimi, obtained 92.83 points, and achieved first place in the sixth round for mares from 7 to 9 years old, while that “AJ Amanah El from Ajman Stud was second with 92.75. One point, and third was “Estonia”, which belongs to Youssef Ahmed Abdullatif Al Ali.
In the seventh round, dedicated to mares 10 years and older, Ajman Stud’s “Passendrstpmuchilo” topped the top spot with 93.25 points, and Sheikh Abdullah bin Majid Al Qasimi’s “Majesty” with 91.25 points, while ” Nawal Bey Apollo” was ranked third for Al Jazeera Stud for Arabian Horses with 90.67 points.

In the ninth round for a year’s dowry, the first section “A”.