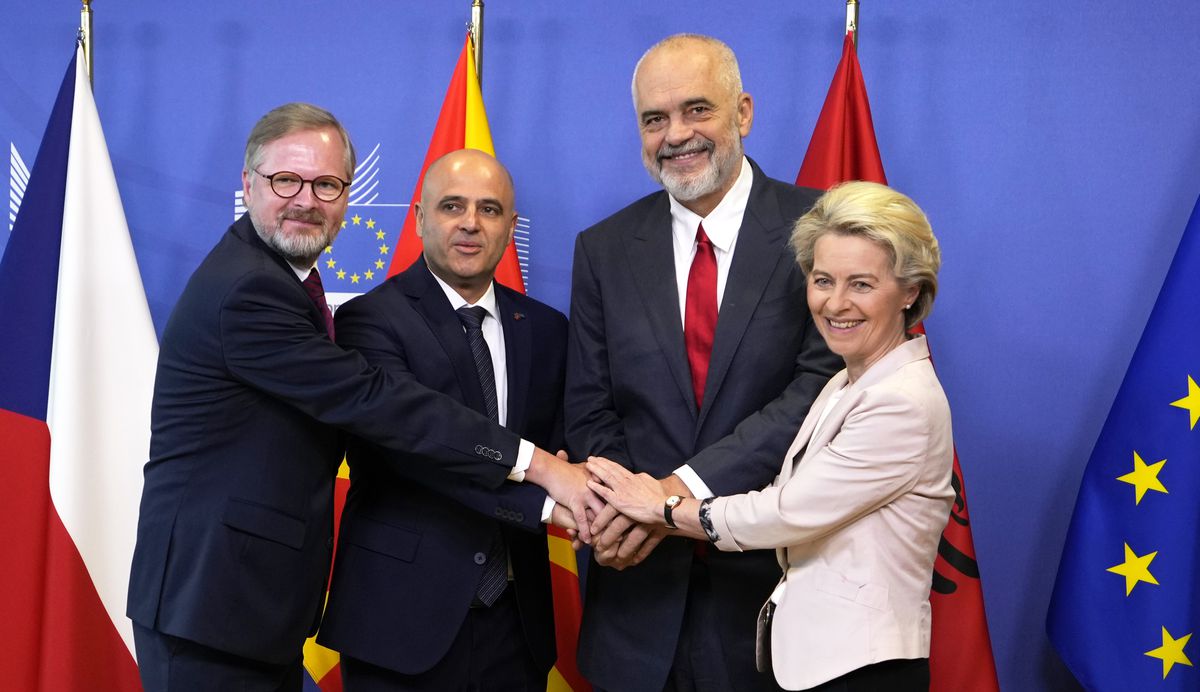 The word “historic” was repeated again and again in Brussels this Tuesday during the opening of negotiations for Albania and North Macedonia’s EU accession, two countries that have been parked in the club’s lobby for years without even being given the chance indicate whether you want to show your access data or not. Finally, the 27 achieved the necessary unanimity to start the process after Bulgaria settled its recent differences with North Macedonia. Brussels hopes negotiations with both candidates will give a boost to the enlargement of the western Balkans, a sensitive and vulnerable area, particularly in the context of the war against Ukraine.

“Undoubtedly, we are at a crossroads in history and are witnessing changes in our geostrategic scenario of which you are a part,” said European Commission Vice-President and EU High Representative for Foreign Affairs Josep Borrell at the start of the Intergovernmental conferences that successively marked the start of negotiations with Skopje and Tirana. “We can only move forward together by integrating the Western Balkans into the EU. We will not be complete without your countries,” he added. North Macedonia was recognized as an official candidate country in 2005 and Albania in 2014, but the opening of negotiations (the first in eight years) only came this Tuesday.

Macedonian Prime Minister Dimitar Kovacevski and Albanian Edi Rama took part in the intergovernmental conferences. The European delegation was chaired by Jan Lipavsky, Foreign Minister of the Czech Republic, the country that holds the presidency of the EU Council this semester. The press conferences that followed were much quieter than those of the EU summit with the Balkans at the end of June, when Kovacevski, Rama and Serbian President Aleksandar Vucic attacked the European partners and, above all, Bulgaria’s veto on the start of negotiations due to an identity and language conflict with North Macedonia.

The dispute was settled thanks to the mediation of France, which held the EU Council Presidency last semester. Sofia has taken her foot off the brakes in exchange for yet another constitutional amendment to Skopje. This time, ethnic Bulgarians (about 3,500 in a country of 1.8 million people) are said to be among the recognized constituent groups of the state. You will also review the account in your textbooks of the occupation of what is now North Macedonia by Bulgaria (a Nazi ally) during World War II.

One of the problems with the deal Paris forged is that it has a kick-forward point. Negotiations will not start until the constitutional amendment is approved, which will require the support of two-thirds of MPs. A majority that the government led by the Social Democrats does not have. An initiative to put the agreement to a referendum is also gaining momentum.

The general feeling among the Balkans’ candidate countries to join the EU is that a lack of political will condemns them to progress at a snail’s pace. In eight years of negotiations, Serbia has barely closed two of the 35 chapters of the acquis communautaire and Montenegro three. But the case of Skopje is a special obstacle course.

The then-provisional Old Yugoslav Republic of Macedonia ran in 2004 and was granted candidate status a year later. Greece blocked its entry until Prime Ministers Zoran Zaev and Alexis Tsipras signed a historic deal on the shores of Lake Prespa in 2018, ending a 27-year conflict over the country’s name. Zaev risked his position to implement a constitutional reform that renamed the country the Republic of North Macedonia.

Then he met French President Emmanuel Macron, who finally forced the accession criteria to be tightened. With Paris’ doubts assuaged, Skopje faced a new fence: Sofia used the veto over differences over the Bulgarian roots of the Macedonian nation and language prior to its founding in 1944 as a republic within the now-defunct Republic of Tito’s socialist Yugoslavia.

It was not uncommon for a member state to use its EU membership to address bilateral conflicts from a position of strength with a country – usually a neighboring country – aspiring to membership. France did it with Spain on the agrarian question in the 1980s, or with Slovenia in 2009 when it stopped Croatia’s first attempt to join the EU because of the persistent territorial conflict over Piran Bay. Zagreb eventually became the last country to join the EU in 2013, when appetite for enlargement was already beginning to wane.

“The French proposal is not a compromise deal, it is sweetened blackmail,” says Jordanova, who regrets that the pact has “exacerbated the division and the crisis” in the country and “discouraged the pro-European actors” in North Macedonia like the rest of the Balkans that are not part of the EU: Serbia, Montenegro, Albania, Bosnia and Kosovo, recognized as a state by all EU countries except five, including Spain.

The start of the negotiations was received differently in the two countries. Albania — held hostage by the Bulgarian veto and contemplating stepping down and starting negotiations alone — breathes a sigh of relief, though aware that if that happens, effective revenues are many years away. In North Macedonia, on the other hand, the reactions range from outrage to resignation. Skopje has been the scene of demonstrations against the pact in recent weeks, and the session that adopted it (with 68 votes in favor out of 120 MEPs) was very angry, with shouts, banners of “ultimatum, no thanks” and even a proxy with a vuvuzela. MPs from the nationalist opposition party Internal Macedonian Revolutionary Organization – Democratic Party of Macedonian National Unity were absent from the vote.

European Commissioner for Neighborhood and Enlargement Olivér Várhelyi was aware of this and warned Kovacevski at Tuesday’s press conference that it was necessary to involve all parties, including civil society. “We need everyone in North Macedonia working for the country and its EU accession,” he said.

Várhelyi made a similar request to Rama. And he has reminded both leaders that national consensus is essential to conducting negotiations that will transform their countries down the road. In return, he promised, the reforms undertaken to align with EU legislation will “have a huge and positive impact on society and the economy, bringing immediate benefits to citizens”.

Both countries had been waiting years for this step towards an association with 27 members, two of which – Slovenia and Croatia – and North Macedonia belong to Yugoslavia.

Balkan countries’ impatience was spurred by Ukraine, a country which applied to join after the Russian invasion on February 24 and was recognized as a candidate along with Moldova in just three months. The EU’s interest in completing its map has also increased amid the risk that Russian President Vladimir Putin will destabilize the area, largely thanks to his good relations with Serbia and the Serb entity in Bosnia-Herzegovina, the Republika Srpska.

Previous articleKatir: “This is the beginning, I hope for another medal at the European Championships”
Next articleDolores Delgado García, former Attorney General: “I don’t care what they say, I’m resigning because my body is broken”