The enchanted forest of Ibarrola comes to life again 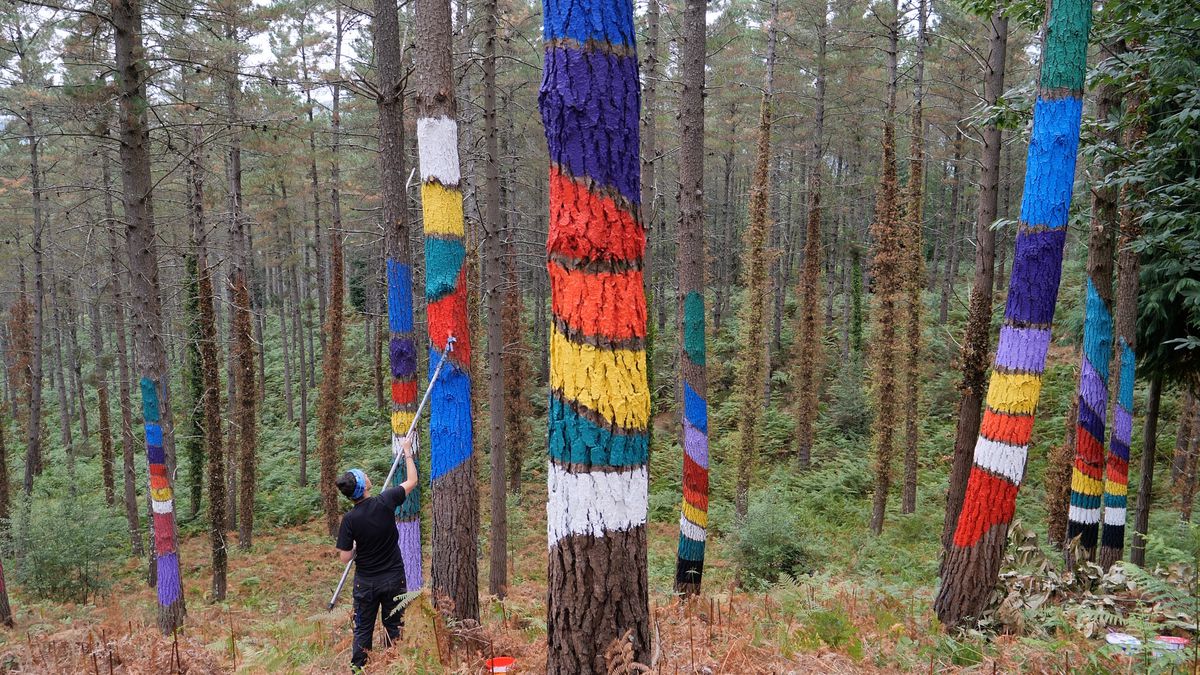 In the greenest area of ​​the Biosphere Reserve Urdaibai (Bizkaia) there are two painted forests, two unique works of art. Very close together, they both exude the artistic magic of Agustín Ibarrola (Basauri, Bizkaia, 1930), but suffer a very different fate. The original Granny Forest, a collection of paintings on pine logs and rocks made by the creator in the early 1980s, faded over the years and became seriously ill from a fungal attack. In 2018 it was closed to the public. At an adjacent site is the new Oma Forest, where more than 700 trees are carefully painted to create a recreation of the open-air museum. It has already started receiving the first visits. The full opening will not take place until October 2023.

The first thing Ibarrola drew in Oma Forest was a white stripe. It took about three years, between 1982 and 1985, to design and complete a series of 47 works on an area of ​​four hectares. Today, a team of 12 people, including visual artists, contemporary art specialists, architects and fine arts students, strives to reproduce the painter’s creations in the 13-hectare Basobarri forest near Oma. It will take you a year and a half to paint the 700 trees that make up the entire artistic framework. The performance will be conducted under the direction of UPV art professor Fernando Bazeta and with the advice of José Ibarrola, the painter’s son.

More than an exact reproduction of the paintings, the intervention consists in transmitting to Basobarri the idea that Ibarrola captured in Oma, in order to “keep alive” the painter’s work. The Provincial Council of Bizkaia, owner of the art collection, has promoted this project in agreement with the creator’s family: “Ibarrola was in favor of acting in this way and this prompted us to start a project that will allow a perishable work to become imperishable to become,” says Asier Madarieta, coordinator of the project in the Biscay Provincial Council. It’s a “novel” initiative, he adds.

The Oma Forest is one of the most famous representations of Ibarrola. He suffered terrorist attacks in 2000 and 2003 in retaliation for the artist’s militancy against ETA. In 2018, the conifer plantation was attacked by brown band disease, which affected 80% of the trees. The foral institution had to close it and start a “complete study and rereading of the work”, explains Madarieta, in order to transfer it to a similar scenario. “It took us a lot to find the site, but fortunately we found an adjacent forest that allows us to reproduce the original spaces,” comments the council representative.

The group of specialists has already started painting the first works, some iconic, such as Eyes, the caught ray, horizontal line, kiss invitation either Nobody’s rainbow. In this first phase, which will last until the end of October, 14 of the 33 picture groups will be completed. Madarieta points out that “harmless color similar to that of Ibarrola is produced ex-professor by a commercial company for this project.” Until September 11, the Bizkaia Provincial Council is offering guided tours (twice a day and in groups of 15 people) by appointment only. In a second phase, between May and September 2023, the painting of the remaining 19 sets will be completed. The end result allows for the salvage of paintings lost in a 1989 logging operation by the then property owners.

The opening of the new showroom involves an investment of around one million euros, paid for by the Biscay Provincial Council. 100,000 visitors are expected to come annually, which was the number the original forest used to reach. The new forest will have a distance of one kilometer. All painted trees treated with biostimulants and pesticides are constantly monitored to assess their behavior and age.

The work to reproduce the works took the country’s orography into account, since, according to those responsible for the project, “it is necessary to respect the perspectives, the three-dimensional approach of the paintings, the depth of the pictorial ensembles. ..”. When Ibarrola placed this large canvas in the forest of Oma, he has often emphasized that he was trying to “create a stimulating and playful experience charged with sensual, visual and aesthetic energy when he paints the forest The promoters assure that the new Bosque de Oma “will be very similar to the first one”, which will allow “the original idea of ​​Ibarrola to be faithfully transmitted”, confirms Madarieta.

Previous articleThe lack of rain and the stifling heat are forcing water restrictions in cities in Barcelona, ​​​​​​Malaga, Huelva and Pontevedra
Next articleThe seven days that marked the death of Silvia Idalia