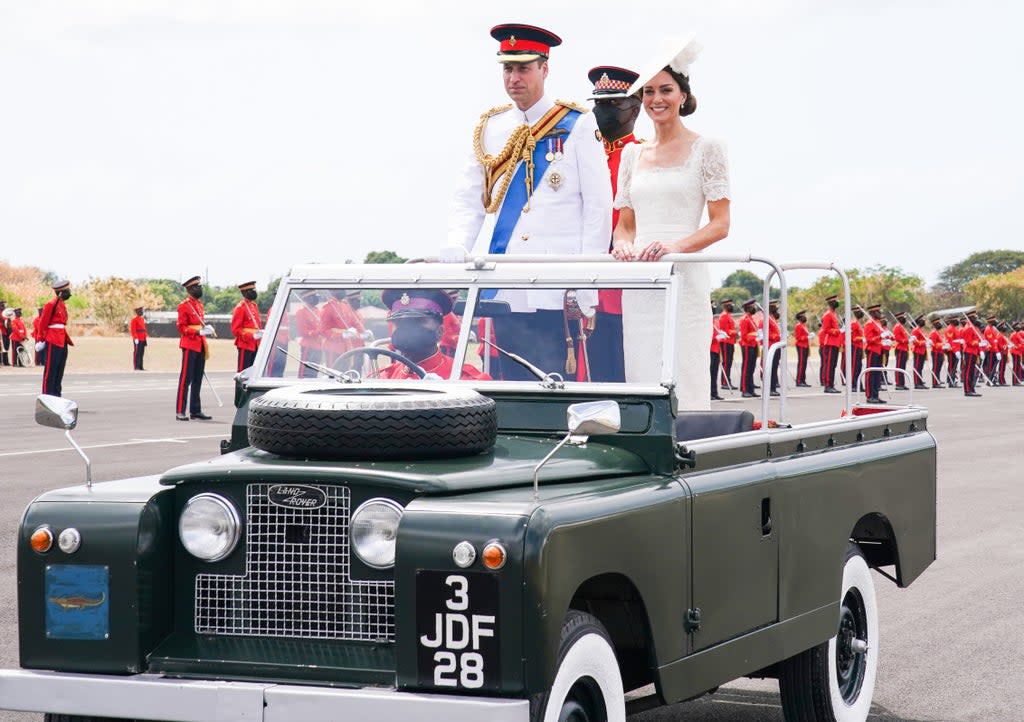 With all the talk of getting rid of the monarchy, the military parade attended by the Duke and Duchess of Cambridge under the scorching Jamaican sun had the feel of a delivery.

But William and Kate pulled out all the stops to put on a first-class performance on Thursday, one that had echoes of the Queen’s visits from a bygone era.

The couple, on the final day of their visit to Jamaica before heading to the Bahamas, enjoyed a ride in the Queen’s Jamaican Land Rover on their final engagement in the country.

Prince William, looking dapper in his No. 1 Tropical Blues and Royals gown for the first time, and Kate, elegant in cream Alexander McQueen with a Philip Treacy hat, boarded the vehicle that transported the Queen and Prince Philip on his visit to the Caribbean island in 1962.

The Cambridges attended the inaugural commissioning parade for service personnel from across the Caribbean who recently completed the Caribbean Military Academy Officer Training Program.

As his wife took a seat in the stands alongside the Governor General, the Prime Minister and the Leader of the Opposition, the Duke received the royal salute before inspecting the parade.

William stood at attention on a dais as newly qualified soldiers passed him, while Kate watched proudly.

The commissioning parade was made up of seventy-nine officer cadets from across the Caribbean, including Jamaica, Antigua and Barbuda, Barbados, and Guyana St Kitts.

A series of parades were held, beginning with one by the President’s platoon, with the Duke standing to pay attention to each.

Once the marches were over, he took the microphone to give a speech.

In his speech, William said he was honored to represent the Queen, telling the graduates: “I have stood out in many pageants as you do now, proud of my achievements but also hoping that the Officer of Review be brief.

“This is even more important today as we bask in the glorious Jamaican sunshine.

“I know very well from my own time at the Royal Military Academy Sandhurst what a formative experience this year will have been.

“Today marks the successful completion of their training program in the classrooms, on the parade grounds and in the exercise areas.

“But remember, this is just the beginning.

“Because now the hard work really begins, when he joins his units and takes command.

“You graduate today as officers in an uncertain world.

“In your future service, you will have to deal with broader climate, geological, criminal, and state and non-state threats to our collective security and prosperity.

“To be asked to guide men and women through uncertainty and danger is overwhelming.

“You never know how strong you are, until being strong is your only option.

“From here on, the onus is on you to become the leaders you’ve been taught in your textbooks, seen on your screens, and witnessed by your instructors.

“Good leadership is difficult to define, but it is easy to recognize in others.”

He added: “Everyone should be incredibly proud of their achievement and the young officers who turned out so smart in front of us today.

“Their collective collaboration and success is a testament to the continued excellent advocacy relationship between Jamaica and the UK.”

Both William and Kate presented awards of excellence to several of the outstanding mosh cadets, as well as Swords of Honour.

A final royal salute was made before departing in the Ceremonial Land Rover for a reception with newly commissioned officers and staff at the Jamaican Officers’ Club.

Kate cautiously walked to the rear of the vehicle up three red velvet steps with the help of her husband because of her heels.

William then joined her and they stood holding onto the handlebars as the vehicle slowly pulled out of work with a motorcycle escort.

As they did, the crowd was told that the pristine Land Rover was purchased by the Jamaica Defense Force in 1962, the same year it was first used by the Queen.

After freshening up they walked to the officers’ club, Kate hanging by her hat in the gusty weather.

Inside, they split up to talk to several different groups of soldiers and their families.

William chatted with a group of Sandhurst officers who have been helping to organize the officer training program for the past 18 months.

“I think his workout was pretty good,” he said. “Really impressive.”

Among the people he spoke to was Captain Matt Tiley, who had worked as a stable boy in the Royal Mews at Buckingham Palace for four years before joining the army and passing out in Sandburg. He is now an instructor there with the Marne Company.

He said: “It has been a great honor to work with them. They have all been so enthusiastic. The Duke clearly has fond memories of Sandhust.”

William told another group that they should take time to enjoy the day with their families like he did. “They should be very proud of you,” he said.

He and the Duchess signed a guest book before leaving to change for their official departure from Jamaica.