The director of educational strategy at MIT: “We fight for Spanish researchers” 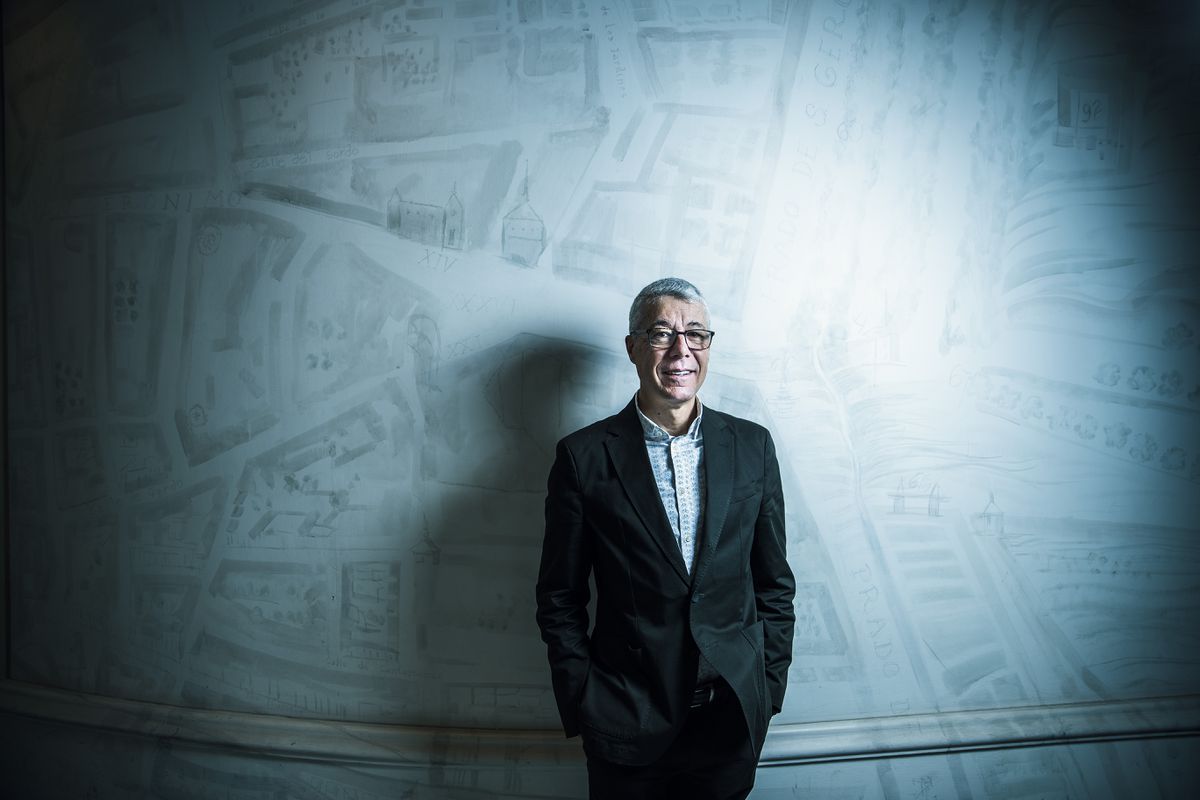 Mexican Marco Muñoz (Medellín, Veracruz-1963) travels the world in search of philanthropic partners to join the scientific and technical challenges of the Massachusetts Institute of Technology (MIT). He is their Director of Strategic Initiatives. He combines the position with the same position at the Ragon Institute, which brings together the joint projects of three top institutions: again MIT, Harvard University and Massachusetts General Hospital. MIT ranks fourth in the Shanghai rankings, and 76 Nobel laureates have passed through its classrooms as professors or students.

A law graduate, Muñoz came to Austin in 1991 to complete graduate school and stayed at the University of Texas. He didn’t want to move to Boston because he hates the cold, but he got an offer from MIT 10 years ago and his boss in Texas talked him into it. “He told me, ‘Only one university in the world has created an aerospace department and put a man on the moon. When we all saw the sky, they already had the place at MIT,” Muñoz tells EL PAÍS in a Madrid hotel.

Questions. In Spain the index of scientific publications is very high, but there is no innovation.

Answer. I would recommend the Spaniards to think more long-term. For example, a few weeks ago, a professor who was prototyping technology to understand AIDS asked us to devote 50% of his research time to the company he would start with three students. All happy: “Good luck to you!” At other universities, on the other hand, you will surely be told: “But what are you doing there? Steal time from the state?”.

R The most important thing is learning the ability to listen, to discern, to discuss without a fight, to be able to integrate into multidisciplinary work teams. In Spain, an experiment might be worthwhile: asking the first-year boys what they think their education should be like, and giving them the opportunity to design their own educational program with a control group, as in the Laboratories.

P Outside opinion is taken seriously at MIT.

R We have a secret recipe, the visiting committees that meet every two years. There are members from industry, from academia, from our competition… We analyze there whether what we teach is relevant to humanity or not, and if it is not interesting, the curriculum needs to be changed.

At MIT, it doesn’t matter if you haven’t been to college

P And does much change?

R. Yes, it is seen whether a subject is only taught later in the undergraduate course, whether subjects are deleted or whether it is viewed from an interdisciplinary perspective. I know students who have graduated [créditos] but they got no run. They define their study program based on what is important to them. 95% of students are in high school with a mission to make the world a better place.

P In Spain there is Titulitis.

R here [España] they seek the paper more than the knowledge. In 2019, the Nobel Prize winners in economics Esther Duflo and Abhijit Banerjee created the master’s degree in Development Economics. Twenty students are invited each year after completing the digital program to spend their final semester working at MIT on a project to solve the poverty problem. I asked a very young student from Singapore, “What are you doing now?” And he replied, “I’m going back home to do my A-levels, I’ll do my A-levels and then my PhD.” But he already has a master’s degree! At MIT, I can give you a master’s degree based on your knowledge, not your role. Besides, I don’t care if you didn’t go to school. show me what you know Then we found out he was 16 years old.

P And the boy will do his doctorate again?

R Yes, we admit it, because we are very demanding. I accept about 20 foreign students per year out of 1,800 new ones in undergraduate studies. In graduate school, I have more foreigners, 60% [de ellos 50 españoles]What Americans.

P Students in Spain leave unprepared for what companies want.

R Talk. A good way is to set up these external committees. That the Polytechnic of Madrid invite the Polytechnic of Zurich and the Complutense. Ultimately, they have the same obligation to generate knowledge. The human capacity that Spain has is incredible. We fight about postdocs [investigadores que acaban de leer la tesis] Spaniards. The main purpose of this trip to Spain was to talk to foundations and companies so that Spaniards who want to come to Boston to prepare can get scholarships. My researchers told me: I need more Spaniards, they are very good. For example, at Ragon we have two girls: a girl from Madrid who is working in molecular biology to cure cancer that she applied for from China and a girl from Seville who is finishing her PhD on HIV.

R Much more could be done. These girls and boys that I identify and take with me are successful in spite of all the challenges they have to overcome here. That doesn’t mean they continue to make it difficult for themselves to be good. My scientific director of the Ragon, an Argentinian, Facundo Batista, tells me that in the laboratories in England – before he came to us – he never had any problems with the Spanish, who are very hardworking and creative. Imagine if they succeed in less than the best of conditions, how about we change the Spanish and university education systems and entrepreneurship flourishes? Spain could become a power of knowledge. I have a lot of confidence in him, more than in the Spaniards.

The state provides me with research projects, but I don’t have a public budget

P They were not caught up in the admissions scandal like other renowned universities.

R We do not have heritage [preferencia en el ingreso por la relación previa de la familia del alumno con la universidad]. If you graduated from Harvard or Stanford, your children are more likely to enter through school heritage, but they must be very capable. Not at MIT, although I wrote to the President asking for a very intelligent son of mine to come in. It’s hard because we lose a lot of donations. I was once in the group that checks admissions. A boy who entered explained [en una carta de motivos]: “I live in a very poor city in India and I want to go to MIT because one day my uncle who lives in the city brought us a box, a few days later I opened it, there was a computer, me hooked it up and I’ve learned a thousand things. I’m sure my brother with autism’s head is like that box, and if I could learn the tools to open it at MIT, it could do wonderful things.” 18% of our students are first generation, in their families studied, and only 14% of the students pay.

P And how do you grant the rest if there is no access preference or heritage?

R We include grants in many philanthropic projects. Education is super expensive at MIT. We destroy labs, we run too many experiments, we screw up and screw up until something works. The state gives me money for research projects, but I don’t have a public budget like Spanish universities. The student who pays the most pays $50,000-60,000 [48.900-58.600 euros] per year if it costs 100,000 to educate each student. That’s why we only have 11,300 students.

P Spain is light years away from the USA. First university in the Shanghai ranking, Barcelona is in the 250 bracket, but 39 Spanish universities (38 of the 50 public) are in the top 1,000 in the world. Proportionally, it doesn’t happen in the United States, where there are 4,600 universities and colleges.

R There are big social and cultural differences that I could never have imagined. It’s one of MIT’s major concerns. It’s America’s great challenge, but the country’s two strong currents are led by older people. What I would recommend is the overhaul of the education system.

P Why do you want to change the education system?

R In elementary school we have to learn science and soft skills [habilidades como hablar en público, trabajar en equipo…]. Many arrive at university so damaged by the education system that we don’t prepare them to apply scientific knowledge in a very natural way.

A carpenter may have better math skills than an engineer

P And you don’t do that at school?

R no We’re doing what we did 20 years ago when we thought there was only one type of cancer and we gave aspirin for pain. You have to check the system from preschool to solve university problem. We think university is fundamental because people are already mature… but it’s too late [para aprender].

P So is MIT child-centric?

R We have a world education lab and work from pre-school to university and with those who have not been able to study despite professional skills. A carpenter may have better math skills than an engineer. Society doesn’t respect them because they don’t have the paper and I give it to them. And we return to the original topic of the conversation: what are you going to university for? These universities, which stand for knowledge, occupy the first places worldwide, apply for patents, publish…

P They don’t have branches like Harvard in Qatar.

R no The strongest program is that of Singapore. 25 years ago the Secretary General of Defense visited us. He said they are very concerned because their economy is based on cheap labor and China is opening up to the world. They wanted to make one of their universities one of the best in the world. They were very bad then and now two are in the top 100 in the Shanghai ranking [National University of Singapore y Nanyang Technological University]. We worked to create high-performance centers and they asked us to test all the technological prototypes there. He was very clear on this because he was a former MIT student.