The Decisive Storm, in its seventh year, is a map of victories against Al-Houthi and Al-Qaeda 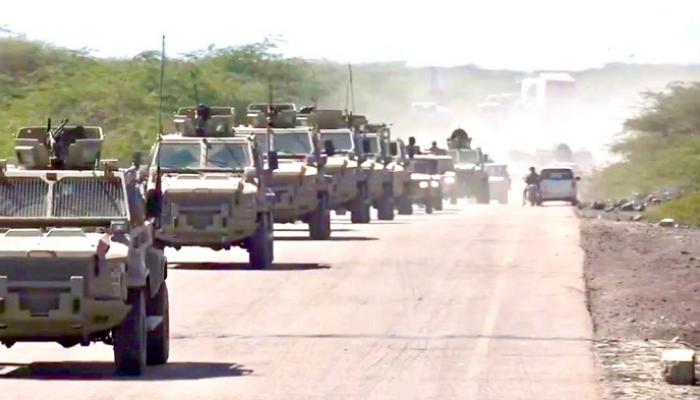 Today, Saturday, marks the seventh anniversary of the launch of Decisive Storm within the operations of the Arab coalition, on the way to pave a pure path for Yemen towards the restoration of its Arab identity.

On March 26, 2015, the coalition announced the start of its operations in Yemen to support legitimacy in response to a request from Yemeni President Abd Rabbo Mansour Hadi, after the Houthi militia rejected all Security Council demands and invaded the provinces.

In this report, “Al-Ain News” provides a time frame on the most prominent operations of the Arab coalition from the start of Operation Decisive Storm, to Operation “Happy Freedom Yemen”, which was launched this year.

From Aden to Ma’rib

During the first months of 2015, the coalition sent columns of its forces to Marib to support the tribes that resisted the Houthi military campaign, in addition to supporting the southern resistance in Aden and Al-Dhalea and the 35th Armored Brigade in the city. from Taiz.

In July of the same year, the southern resistance, with the support of the Arab coalition, specifically the armed forces of the United Arab Emirates, launched Operation Golden Arrow, which managed to liberate and secure the city of Aden from the Houthis.

In record time, field victories extended to liberate Lahj, Al-Dhalea, Abyan and Shabwa governorates, as well as reaching Bab Al-Mandab, one of the world’s most important waterways, instead of securing Al- Mahra, Sokotra. and parts of Hadramaut.

Forces from the 35th Armored Brigade secured much of Taiz before the launch of popular resistance, which was then tasked with securing it.

To the east, the coalition formed Yemeni brigades that succeeded in liberating the entire Ma’rib Governorate and parts of Al-Jawf and Al-Bayda Governorates and reached the outskirts of Sanaa, before the Brotherhood recently abandoned these precious conquests with gross negligence.

In 2016, the coalition launched decisive military operations to drive out and hunt down the terrorist organization Al-Qaeda in the Arabian Peninsula, which coordinated with the Houthi militia to control the southern and eastern governorates of the country, in particular Hadramout.

The military operation succeeded in liberating the city of Mukalla, the capital of Hadhramaut Governorate, a year after Al-Qaeda took control of the city overlooking the Arabian Sea.

In 2017, the Arab coalition launched a naval and ground operation, dubbed “The Golden Spear”, to liberate the western coasts and their metropolises of Bab al-Mandab, Dhibab, Mocha and even al-Khoukha. Emirati forces participated in this campaign, as well as the entry of gigantic brigades into the battle line.

The Battle of Hodeidah and the Houthis’ Exploitation of Peace

In the following year, 2018, the coalition announced the start of operations to liberate Hodeidah by engaging joint forces in a battle against a larger industry that transformed Yemen and managed to reach the outskirts of the vital port before it the international community put pressure on it to stop. the operation under the pretext of humanitarian repercussions.

The Arab coalition forced the Houthi militias to come to the dialogue table for the first time and sign the Stockholm Agreement on December 18, but the militias quickly turned against their promises the following year and refused to implement them.

During 2020, the Houthi militia took advantage of the false international peace and mobilized for the biggest attack with the aim of sweeping the city of Marib to control the oil and gas fields, but the Arab coalition and the Yemeni army were able to prevent the militias from make no progress.

The year 2021 saw a massive redeployment of joint forces with the support of the Arab coalition outside the Stockholm Agreement areas, with the aim of putting the United Nations at the forefront of its responsibility to force the Houthi militia to implement.

A military operation was launched during which the entire Hays district and areas of Maqbna, Jabal Ras and Al-Jarrahi districts in Taiz and Al-Hodeidah governorates were liberated, the culmination of 2021.

Simultaneously, the Houthi militia interpreted Washington’s removal of their name from terrorism lists as a green light for terrorist operations, and continued their attack on Ma’rib and invaded several districts and districts in Al-Bayda and Shabwa, thereby caused the coalition to push the forces of the giants in the front line.

The Southern Giants Brigades forces achieved unprecedented achievements in the first 10 days of January 2022, liberating Usaylan, Bayhan and Ain districts during the “Southern Hurricane”, as well as liberating Harib district at the end of last month and foiling the Houthis and Iran’s plan to overthrow Marib.

Last January, the Shabwa Arab coalition announced the start of Operation Happy Yemen Freedom, which is not just a military operation, but a stage of growth and prosperity, while last February saw the appointment of al -Houthi for the first time as a terrorist group by the Security Council under Chapter VII.

The countries of the Arab coalition, led by Saudi Arabia, continue to support the Yemenis in their fateful battle, to secure the country and the region, and in the face of the danger of the Iranian project and the Houthi militia, which continues with its terrorist attacks against the Maritime navigation. and neighboring countries.

According to the spokesman for the Yemeni Joint Forces, Colonel Waddah Al-Dubaish, the celebration of the 7th anniversary of Decisive Storm is a celebration of Yemen’s distancing from Iran, and had it not been for the Arab coalition, today the leaders of Tehran and Iranian Revolutionary Guard officers would roam freely in Yemeni cities and ports.

The military spokesman told Al-Ain Al-Akhbar that the Decisive Storm had destroyed Iranian aspirations, that they saw Yemen as another country that should be destroyed and stripped of its Arab environment, including the overthrow of sedition leaders and their agents. in yemen

Al-Dubaish praised the sacrifices of the Arab coalition, vowing to stay with it in a trench and a gun, and not give up the battle to defend the dignity of our Arab nation until the project of Khomeinist revolution in Yemen is broken.

He asks: “What would happen if the Arab coalition did not intervene in Yemen? Is it possible to imagine Yemeni cities turned into cities run by Tehran, through which it spreads its intellectual poison and demonic evil? Of course not, but its streets were a stage”. for the roaming of terrorist officers of the Revolutionary Guard”.

Given the great progress that has been made, Colonel Al-Dubaish believes that there is no alternative to military force to complete the elimination of the Houthi militia, through cohesion with the Arab coalition, which has innumerable achievements, highlighting the preparation of Yemeni forces. for the decisive battle on all fronts.

Regarding the international community, Colonel Waddah Al-Dubaish confirms that Yemen has suffered for years from inaction and its biased positions towards the Houthi militia, and the United Nations was a stumbling block in delaying or not completing the defeat of the Houthi militia.

The countries of the region that revolve around Iran’s orbit are also playing the role of shadowing the international community to legitimize and install the Houthis, either through international organizations or by facilitating arms smuggling with the aim of keeping the Houthis as a source of threat to Yemen and the Arabian Peninsula in general, according to statements by the military official to “Al-Ain News”.