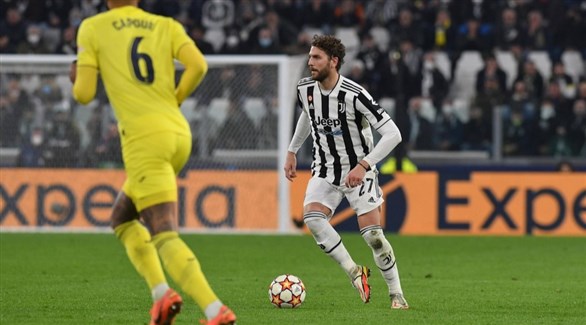 The Italian team suffered a painful blow before entering the European qualifying play-off for the World Cup, after Juventus midfielder Manuel Locatelli was confirmed to have contracted the Corona virus.

Locatelli, 24, is scheduled to miss the game between Juventus and host Salernitana next Sunday as doubts remain over his involvement with the Italian team against North Macedonia later this month in World Cup qualifying. .

The result of the test was announced today, Thursday, while Locatelli participated for 83 minutes in the Juventus match against their Spanish guest, Villarreal, which ended with the defeat of the ‘old’ 0-3, to be eliminated of the round of 16. 16 in the Champions, yesterday Wednesday.

“Juventus Football Club announces today the emergence of a positive case of Manuel Locatelli’s Covid-19 disease, according to the local health authority, the player has already been placed in isolation,” Juventus said in a statement.

Juventus suffered a huge disappointment after their early exit from the Champions League, as they conceded 3 goals in the last 12 minutes, including two goals after replacing Locatelli, to fail to reach the quarter-finals of the competition that crowned them in 1985. and 1996.

It should be noted that Juventus is currently fourth in the Italian league standings, 7 points behind Milan (the leaders), 9 stages from the end of the competition.

The Italian team (European champions) will face North Macedonia on March 24 in Palermo, where the winning team will get up to meet the winner of the match between Portugal and Turkey, to determine the team qualified for the World Cup final, which It will be held in Qatar during the period from November 21 (November) to December 18, 2022.