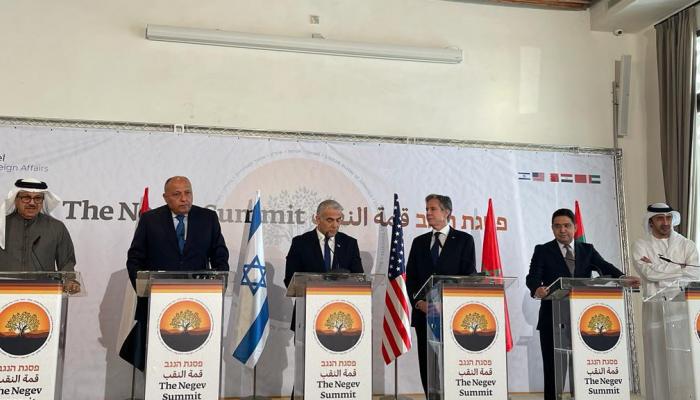 At the conclusion of the Negev Summit, the foreign ministers of the United Arab Emirates, Egypt, Morocco, Bahrain, the United States and Israel unanimously renounce terrorism and promote peace.

In a joint press conference between the six ministers, Israeli Foreign Minister Yair Lapid said that the meeting in the Negev would not be the last and called on everyone to participate, including the Palestinians.

“Last night we decided to make the Negev Summit a permanent forum. Together with our closest friend, the United States, today we open the door to all the peoples of the region, including the Palestinians,” added Lapid.

The Israeli minister described the meeting as “making history,” referring to building a new regional architecture based on progress, technology, religious tolerance, security and intelligence cooperation.

“This new structure, the joint capabilities that we are building, Lapid says, intimidates and deters our common enemies, first and foremost; Iran and its representatives certainly have something to fear. What will stop them is not indecision, but determination and strength.”

As for the US Secretary of State, Anthony Blinken, who was the second speaker, he indicated that “such a meeting was impossible several years ago”, adding: “We see the growth of relations between the countries of the United Arab Emirates, Bahrain and Morocco with Israel. .”

In this context, the US secretary pointed out that “the Ibrahim agreements make the life of the population more stable and prosperous, and we support the process that changes the region.”

The US minister revealed a working group to combat intolerance in which Israel and the United Arab Emirates are working to ensure peace and prosperity for the peoples.

Regarding the Israeli-Palestinian conflict, the US Secretary of State said that conditions must be created to negotiate a two-state solution.

While emphasizing that the United States and its allies will work together to meet challenges and security threats, including Iran and its proxies.

At the beginning of his speech at the press conference, Bahraini Foreign Minister Abdullatif Al-Zayani condemned the terrorist attack, which took place yesterday afternoon, Sunday, in Hadera, Israel, condemning terrorism in all its shapes.

In this context, Al-Zayani indicated that the Houthis continue their attacks on civilian facilities, while Hezbollah continues with its terrorist attacks, recalling the threat of the Iranian nuclear program.

The Bahraini minister called on those gathered in the Negev to show the world what they can achieve through the joint work of the participating countries, noting the need to resolve the Israeli-Palestinian conflict, calling on the two sides to sit together to reach a solution.

Al-Zayani also spoke about the huge potential to achieve more, and this forum is important to strengthen relations, as he thanked the United States of America for its support of the Ibrahim Peace Accords.

On September 15, 2020, the world witnessed a historic event with the signing of a peace agreement between Israel and the United Arab Emirates, which constituted a historic moment.

Egyptian Foreign Minister Sameh Shoukry began his speech at the press conference by stressing the importance of the peace process between Palestinians and Israelis, to implement the two-state solution for the establishment of a Palestinian state on the 1967 borders. with East Jerusalem. as its capital.

In that context, he indicated that Egypt is trying to coordinate between Israelis and Palestinians to reach a two-state solution.

While condemning any resort to violence, terrorism and incitement, he stresses that the Negev summit was constructive and insightful, addresses the multiple challenges in the region, and points to constructive developments in Egyptian-Israeli relations since the CampDavid.

Shoukry explained that the countries participating in the Negev Summit have the resources and capacities to face the challenges of the region with the help of our partners, and that Egypt seeks to expand and strengthen the areas of cooperation to achieve the interests of the region.

The fourth speaker was the Moroccan Foreign Minister, Nasser Bourita, who also highlighted the condemnation of yesterday’s terrorist attacks in Hadera, stressing that our participation in the Negev Summit is the best response to terrorist attacks.

The Moroccan foreign minister explained that his country has made many contacts with Israel since the establishment of peace relations, and that his participation in this summit in Israel demonstrates our belief in peace and the possibility of resolving the Israeli-Palestinian conflict.

For his part, the Minister of Foreign Affairs and International Cooperation of the United Arab Emirates, Sheikh Abdullah bin Zayed Al Nahyan, at the beginning of his speech at the joint press conference, described the Negev Summit by saying: “We are witnessing historic moments with our meeting in Israel. ”, highlighting that the latter has been part of the region for a long time, and it is time to build strong relationships with it.

Sheikh Abdullah bin Zayed Al Nahyan noted that the UAE seeks to create a different future for the children and grandchildren of our peoples.

The Foreign Minister of the United Arab Emirates mentioned the role of Egypt, saying that “it has shown us a leading role in establishing peace relations with Israel, and there are great opportunities that result from cooperation with Israel, and we will win , There’s no doubt”.