The colors illuminate the Navalcarnero prison 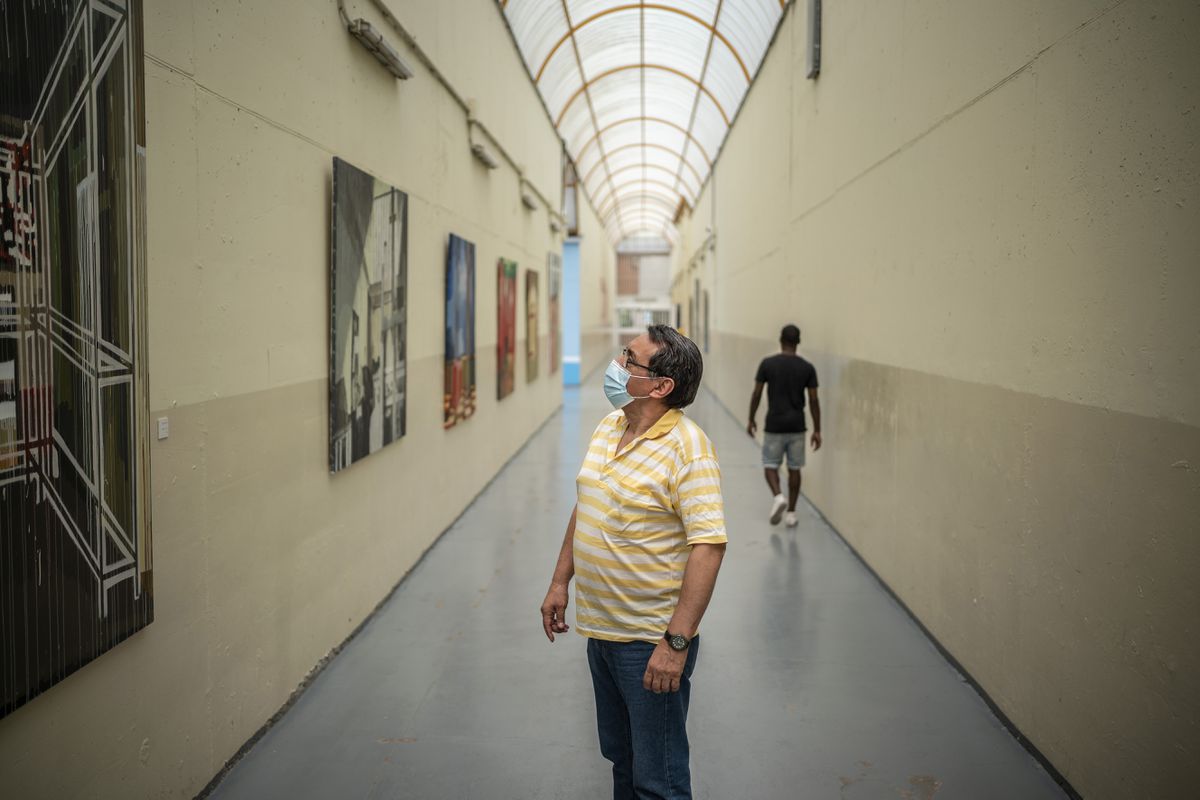 The birds perch on the accordions, strategically avoiding the spikes that flank the walls of Navalcarnero prison in Madrid. As soon as you enter the center, which houses 810 inmates, there’s a long corridor and white beams reaching to the ceiling, a kind of dome that lets light in through plastic sheets, owing to the heat contracting like a greenhouse , and the cold creeps in mercilessly in the winter months. In the same corridor, which they call M-30, 14 large-format paintings are hanging for the first time. They come from the artist Ikella Alonso and its colors illuminate a place where freedom is but a memory. Never before has a prison been turned into an art gallery.

Víctor is enthusiastic about the exhibition of the Madrid painter during its opening in July, the only one so far by an artist outside the prison environment. The first thing this Argentine inmate says is that he wants more to be done. “Art asks unanswered questions and nourishes our capacity for wonder. It’s the other me that we have,” he muses in front of the screen he likes best. It is the one that recreates a scene of people gathered in a gallery where an exhibition is taking place, as part of this postmodern artist’s obsession with putting paintings within paintings.

Good humor impregnates the character of Víctor, who declares himself a fan of Gernika and the City of Arts and Sciences of Valencia. “Painting is therapy and it grabs you without having to take anything,” he jokes. Though he thinks not all inmates can connect to the art that Navalcarnero prison brings them, thank you on this Solidarity for Development initiative. and the Círculo de Bellas Artes to offer quality culture; a useful integration tool that raises new concerns among inmates, prompting them to withdraw them later after serving their sentence. Speaking about his own stay, Víctor points out that people are also trapped on the streets by their problems and their accounts. “The survival instinct is the same here as there,” he says.

One of the downsides that Juanma, another inmate, an admirer of hyper-realist painters like Eduardo Naranjo, sees is that the corridor is too narrow to properly assess these large paintings. “Seclusion is required,” he adds. Although he clearly recognizes the different emotions driving Alonso’s retrospective. The chosen location catches his attention as the M-30 is the first and last thing the prisoner sees. Again, for Juanma, this corridor that “mixes art on a wall so cold” combines the sadness of entering with the joy of leaving.

“We’re a lump in society, we’re like tobacco that’s legal, but people prefer not to be associated with it,” Juanma thinks. In the end he chooses to see the glass half full and ends up celebrating that he has approached reading with so much time and now feels more free after breaking out of one of the foreign prisons: “The slavery of the cell phone “.

The order dictated by the vertical brushstrokes that flood Ikella Alonso’s works communicate, as if they were bars, with prison architecture. “It almost looks like a created work ex-professor”, is the artist, who has participated in more than 100 individual and collective exhibitions, surprised by the presentation of the center’s summer season, which includes workshops on Don Quixote and Kant or a series of documentaries.

The lecture takes place in a room where the inmates are seated reading the activity brochure, surrounded by shelves with a hundred books, a paper mus trophy, a wooden box with dominoes inside which is written in pen: “Lang live Spain!” a giant wall clock showing 11:10 and the phrase “let ours stay yours” tattooed on one of the arms of inmates of this “respect module,” a category in which they have some flexibility and autonomy in educational commitments, among other things

He was a history teacher, speaks five languages ​​and will publish an article on the mentally ill in prisons in the Navalcarnero Center magazine. So says Javier, who is coping with imprisonment with a motto: “The key is to contribute”. What he appreciates most about these types of projects is both the closeness to the outside world and the recognition that they exist as a group. His favorite painting is the most colorful one, a landscape seen from a satellite that ends the exhibition, in which Javier likes to see the references to Picasso, Velázquez, Matisse or Van Gogh in Alonso’s work. The iron prison life becomes more bearable and he comes to the conclusion: “We are not so forgotten.”

Foucault’s book Watch out and punish, should not be a formula for prisons. It is the philosophy of Cristóbal Sánchez, President of Solidarios por el Desarrollo, who believes in the healing power of culture and ensures that it is more present in prisons at the same level as technical training. He believes it is possible to “build a community of interest where things flow”. Sociologist Lourdel Gil, Deputy Director General for Penitentiary Treatment and Management, agrees, lamenting that prisons remain on the fringes and are protagonists only when a celebrity enters or there is a negative episode.

One of the black and white canvases alluding to the death of Ikella Alonso’s father is the one chosen by David, a recluse feeling the influence of death black colors by Goya, which he created in the Quinta del Sordo, the estate of the Carabanchels where he lived before his exile. Article 25.2 of the Constitution states that the sentenced person has the right “to access culture and to the full development of his or her personality”. David, who believes prisons should be under the Ministry of Education umbrella, wants to remind us: “These activities are part of the treatment. Many people have no principles and culture changes them. It’s a fundamental element to be respectful of those of us who weren’t, it’s the value we’ve lost.”