The Coast of the Giants: footprints in the Gulf of Cadiz confirm the coexistence of giant aurochs with other megafauna and Neanderthals 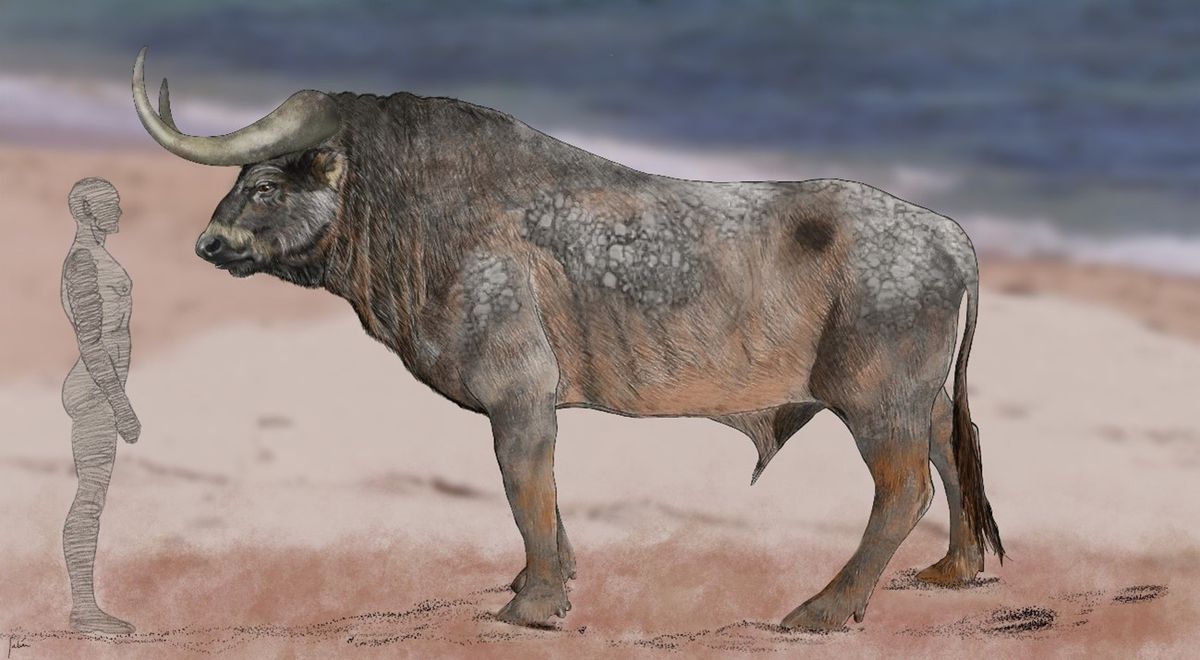 A footprint on the ground is much more than a mark. It can be seen what or who left it, what it was doing back then, what the environment looked like, where it migrated to, its weight and size or its habits. In the study of prehistory, in the absence of biological remains, in many cases the only option is to write the gaps left by the passage of time. A new study led by geologists Carlos Neto de Carvalho, Fernando Muñiz Guinea and Luis Cáceres Puro from the Universities of Lisbon, Seville and Huelva, published in Scientific Reportshas made it possible to discover the tracks of aurochs (Bos primigenius), up to two meters tall and weighing 1,500 kilograms, left a little over 100,000 years ago on the coast of Trafalgar (Cádiz) and in Matalascañas (Huelva). The find extends the temporal and spatial extent of the megafauna that took refuge in the south of the Iberian Peninsula from the ice that invaded much of the continent, confirming the relationships between the last survivors of the late Interglacial, including the Neanderthals, and revealing the first steps animal domestication, one of mankind’s most important advances.

At the end of the Pleistocene (a stage ranging from 2.59 million years ago to 11,700 years ago), the aurochs are the only cattle living along the major river valleys of the southern peninsula. Traces of these animals found in Trafalgar and Matalascañas date back to around 106,000 years ago. According to Carlos Neto de Carvalho, geologist, paleontologist and collaborating scientist at Institut Dom Luiz (University of Lisbon) and UNESCO World Geopark Naturtejo (Portugal), “the fossil record of the behavior of these large mammals is rare in the world and it has never been recorded in rocks and sediments found that are as old as those in which our team first identified footprints from these animals at Cape Trafalgar.”

Ichnology, the study of traces or signs of activity left by living things (animals and plants) in sediments or rocks, has special rules and gives rise to its own designations of ichnogenera and ichnospecies (icon is footprint in Greek). For Fernando Muñiz, also a paleontologist, co-author of the research and Professor of Crystallography and Mineralogy at the University of Seville, “the discovery of a new ichnogenesis and species (Bovinichnus uropeda) in Trafalgar is one of the achievements of this study, but also the correlation with the traces in the Mid-Late Pleistocene coastal deposits of the Asperillo Cliff section in Matalascañas (Huelva) and the known bone remains in Gibraltar. This correlation indicates a recurrent use of coastal habitat by these large even-toed ungulates in the southwestern Iberian Peninsula.”

In this way, the entire Gulf of Cadiz is already marked as a refuge for the megafauna that coexisted with Neanderthals. In Huelva, the same team found tracks Palaeoloxodon antiquusStraight-tusked elephants similar to today’s but up to four meters tall, wild boars (sus scrofa scrofa), which were three times the size of those existing today and weighed up to 300 kilograms, huge red deer, wolves and other animals.

The last traces of Cape Trafalgar show an equally gigantic aurochs with hoof prints up to 27 centimeters long. As Neto De Carvalho explains, “The rounded footprints of a current adult bull rarely exceed 10 centimeters.” And he adds: “In Matalascañas we have had the experience of measuring tracks caring, a bull that weighed 1,128 kilograms and was no taller than 18 centimeters. The Cape Trafalgar aurochs would be an animal that would be over two meters tall from the head (not counting the horns, which are known to reach 80 centimeters in length) and weighed around 1,500 kilograms. The females in this species were smaller and showed strong sexual dimorphism. [variaciones en la fisonomía externa entre los dos sexos]which also appears to be present if we compare the aurochs footprints at the new paleontological site at Cape Trafalgar with those at Matalascañas”.

But studying the tracks goes beyond identifying the physiological characteristics of animals. The traces of beach and dune imprints, according to the work, “show a preferred direction of movement towards the coast”. This environment may seem unexpected in herbivores. However, it is consistent with the behavior of current herds in coastal areas. “The great Trafalgar trails,” adds the research, “mostly show the same direction of movement and are interpreted as a herd of bulls slowly heading towards the coast in search of rest, as is currently the case with wild cattle coasts in different parts.” of the world”. the aurochs (Bos primigenius)”, Neto de Carvalho recalls, “are the ancestors of cattle (boss bull) and have been extinct since 1627.

Muñiz clarifies that “these tracks define the paleoenvironment and are important for understanding the ecology, the interactions between possible predators and prey, and determining the onset of possible domestication of livestock.”

A foot that left a mark of 31 centimeters

For this statement, the Portuguese researcher provides another particularly relevant finding in the same field. “The imprint of a 31 centimeter long articulated foot was found at Cape Trafalgar. It doesn’t necessarily mean that the foot – and consequently the hominid that produced it [neandertal]— was of such magnitude because the flexibility of the human foot when locomotion on a sandy dune substrate usually results in a footprint larger than the foot, especially on sloping surfaces. However, it is a rare find that deserves attention, since the traces of the Neanderthals, part of our genetic ancestors and disappeared during the last ice age, are still very rare and give precise ones, except in the Iberian Peninsula, which was their last refuge Notes on behavior, population structure and ecology”.

The importance of this presence is fundamental, as the paleontologist and scientist at the Dom Luiz Institute in Lisbon explains: “We have found Neanderthal human footprints in fossil sediments from Gibraltar, Matalascañas and now possibly before the arrival of Cape Trafalgar humans, anatomically modern in the Iberian Peninsula. More than 100,000 years ago, Neanderthals and megafauna roamed the southwest coast. That can not be a coincidence. Their tracks indicate a proximity and complicity of behaviors established in specific habitats between predator or scavenger and prey or corpse. Like us, Neanderthals would not be averse to eating shellfish and fish, but the large mammals such as aurochs (also elephants, goats, etc.) that are hunted or found dead would be the main source of protein for their families. This close monitoring of the aurochs herds to protect them from other predators, selecting the weakest animals and eliminating the sick would have been the first step towards domestication.

The Portuguese researcher also provides an explanation for the gigantism of these animals: “The period in which the megafauna lived consisted of aurochs, wild boar and giant deer, as well as one of the largest elephants, the Palaeoloxon antiquus, traces of which are detectable from Portugal to Cadiz, responds to the millennia-old abundance of food resources in an Iberian peninsula with a warmer and wetter climate than today. Food for herbivorous animals was widespread in the forests of the time, particularly along rivers such as the Guadalquivir, whose estuaries, swamps and lagoons were the aurochs’ preferred habitat. These were also the main food source for supercarnivores such as lions, leopards, hyenas and wolves as well as for our ancestors, the Neanderthals. The pressures imposed by predators may have had evolutionary consequences in the sense that natural selection gave priority to larger animals to defend against these large predators.”

The research was carried out by an international team of researchers from Spain (Doñana National Park and Universities of Seville, Huelva and Barcelona), Portugal (Universities of Lisbon, Évora and Coimbra, Geopark Naturtejo, Polytechnic Institute of Tomar), China (Academy of Natural Resources of Henan) and the National Museum of Gibraltar.

- Advertisement -
Share
Facebook
Twitter
Pinterest
WhatsApp
Previous articleCavazzani (etermax) believes that the “gaming” and social parts will be the entry points to the metaverse
Next articleThe Consell complements the Ramón y Cajal grants with more than €500,000 for 83 research staff contracts