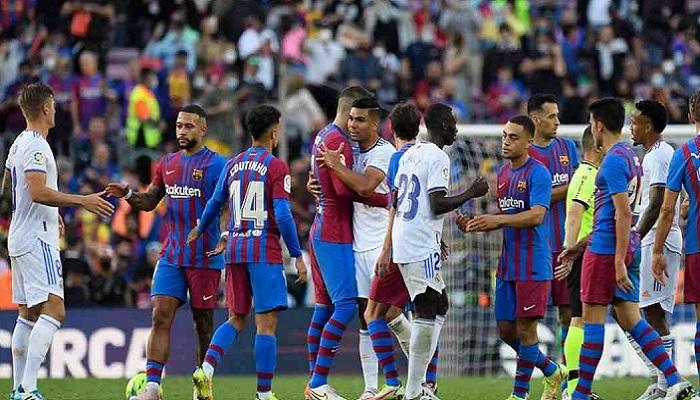 Barcelona fans hope to break the knot with local rivals Real Madrid when they meet at the Santiago Bernabeu in the Spanish league on Sunday.

Real Madrid leads Spanish league positions With Day 29, with 66 points, Barcelona is fourth with 51 points, but the latter has an additional game.

Barça did not achieve any victory over Real Madrid in the last 6 games between the two teams, since the last Catalan victory in the Clásico was achieved on March 2, 2019 with the goal of the Croatian Ivan Rakitic at the Santiago Bernabéu.

Barcelona and Real Madrid have never faced each other on March 20, the date of today’s game, only twice, and the Catalan team won.

On this day in 1927, Barça defeated Real Madrid 4-1 at the Chamartín stadium, bastion of the former royal club, in a friendly match.

For Barça, Josep Sastre scored “two goals” and Esteve Pedrol, in addition to an own goal by Félix Quisada, a merengue player, while Félix Pérez scored a goal that saved the locals’ face.

The second meeting on this date, was in La Liga in 1960, and Catalonia also finished with a score of 3-1. Sandor Kosic, Eulogio Martínez and Ramón Valverde scored for Barça, and the legend Alfredo Di Stéfano for Real.

Barça will rely on the date of March 20 to break his contract in the recent period against Merengue, after receiving 5 defeats, 2-0, 3-1, 2-1 twice in La Liga and 3-2 in the Super from Spain, and against them a 0-0 draw.