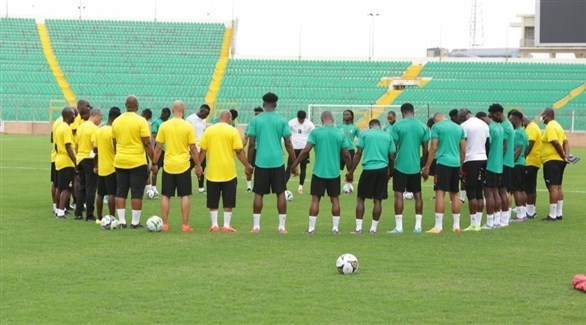 The two teams will meet tomorrow, Friday, at the Baba Yara Stadium in Kumasi, in the first leg of the decisive final round of the African qualifiers for the Qatar 2022 World Cup.

The matchup represents a clash between two giants of African football, as both teams have a rich history of achievement on the continental arena, with each having made a good mark in the World Cup.

The confrontation also represents one of the most prestigious international derbies on the African continent, where the two neighboring countries, Ghana and Nigeria, will meet in a close battle for qualification for the World Cup.

The Ghanaian team hopes to end tomorrow’s game with a reassuring result before traveling to Nigeria for the second leg next Tuesday.

The Ghanaian team had remained unbeaten in their last four group stage matches in these qualifiers, and recorded three wins from these four fixtures, the last of which was a 1-0 victory over South Africa.

The Black Stars will be aiming to maintain this good record in the qualifiers when the team takes on their Nigerian counterpart tomorrow in Kumasi, knowing that the Nigerian team put in an outstanding run in the group stage of the current qualifiers, and their latest result in the group stage was a 1-1 draw with Cabo Verde (Cape Verde). .

It is also worth noting that the Nigerian team won all three of their away games in the group stage of the current tie, which gives the team an additional incentive for tomorrow’s match.

The Nigerian team (the Eagles) was eliminated from the African Cup of Nations, organized by Cameroon several weeks ago, in the round of 16, while the Ghanaian team was eliminated in the first round (group stage).

This failure doubles the desire of the two teams to qualify for the World Cup to compensate and reconcile their fans.