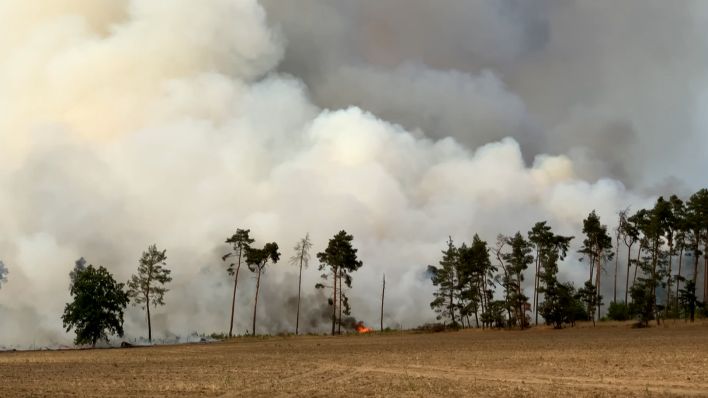 The fire in Falkenberg (Elbe-Elster) has been extinguished. The deputy fire chief of the Liebenwerda association announced this on Tuesday. At its largest, the fire affected more than 800 hectares.

A good week after the forest fire that broke out in southern Brandenburg, the fire was extinguished. This was announced on Tuesday by the deputy fire chief of the Liebenwerda association, Martin Neumann. The large extinguishing measures in the Kölsa-Rehfeld region in the Elbe-Elster district on the border with Saxony have come to an end. The challenge now is to hand over the areas affected by the fire to the more than 60 owners, Neumann told the dpa news agency.

Now only one vehicle patrols every two hours. The responsible association municipality of Liebenwerda had already drawn up a preparedness plan for this, the Lausitz control center said when asked by rbb.

Therefore, the community association will provide fire watch until Wednesday. A central event for forest owners is scheduled for Wednesday evening, during which the forest areas will be handed over to them. You then also take over the fire watch. The Landesbetrieb Forst Brandenburg invited 60 forest owners who own 465 hectares of forest in the area affected by the fire. These mainly included areas in the Falkenberg districts of Rehfeld and Kölsa.

The fire started on Monday last week (25/07/2022) and quickly spread to around 800 hectares – an area around four times the size of Monaco. The Bundeswehr, the police, the THW and the fire brigade from numerous districts in Brandenburg had fought the flames. They were supported by forces from four federal states.

The weather remains a big unknown

Rescuers are worried about the weather forecast for the coming days. The German weather service announced maximum temperatures between 32 and 34 degrees and a strong thermal load for this Wednesday. Thursday it should be up to 37 degrees.

“We are currently busy fixing the technology so that it is ready for use again,” Neumann said. According to Deputy Forest Fire Protection Officer Philipp Haase, the highest forest fire risk level five will apply to some districts in Brandenburg this Wednesday and then to almost all districts on Thursday.

The forest fire near Falkenberg in pictures