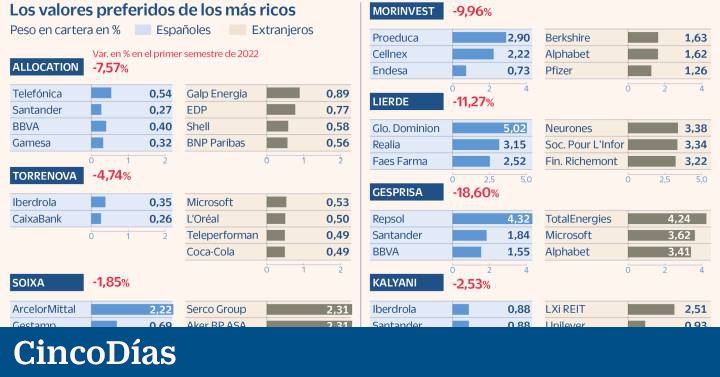 A first half of the year to forget. As stock markets and fixed income recorded their worst moments since the outbreak of the pandemic, not even the great fortunes escaped the red. The losses, albeit in varying degrees, have been unanimous in all of its investment vehicles, where the stock market generally does not occupy a prominent place and even less the domestic market, where the joint position in banks and energy companies stands out, now under the threat of Government announced tax in response to high inflation. In light of the interest rate hike, the big fortunes have also decided to liquidate positions in the big US tech companies.

The SICAV that showed the greatest resistance to losses was that of Antonio Hernández Calleja, the founder of Ebro Foods. Soixa, which manages Magallanes, fell 1.85% in June, a figure that compares to gains of 22.66% in 2021. The SICAV has assets of 370.75 million. More than half of this sum (around 203.8 million euros) is invested in the stock market. Among the top positions in national equities, ArcelorMittal (2.22% of the portfolio), Gestamp (0.69%) and Repsol (0.62%) stand out. Along with commodity-related listed companies, Hernández Calleja has used the rebound in the banking sector on expectations of monetary normalization to increase exposure to the financial sector. Bankinter and CaixaBank are your preferred options. 3.45 million were invested in the two companies, up 34%. On the foreign stock market, the preferred options are the British Serco (2.31%), the Norwegian oil company Aker BP (2.31%) and the shipping company Euronav (2.28%), which specializes in the sea transport of oil. The investment vehicle replicates its exposure to banking with Unicredit, Commerzbank and ING.

A notch behind Soixa in terms of profitability is Kalyani, Indian investor Ram Bhavnani’s sicav, which fell -2.53% in the first half. With assets of around EUR 56 million, 27.6% are invested in the stock market. While Banco Santander (0.88%) is among the largest exposures to national equities, it also includes Bankinter (0.48%) and CaixaBank. Associated with the unit led by Ana Botín are Iberdrola and Repsol, all of which are now being valued under the uncertainty of the new tax.

In foreign investment, British real estate company LXI Reit (2.51%) stands out in SICAV Bhavnani, along with Unilever (0.93%) and energy company Engie (0.91%). The big tech companies, which were the best-performing investment during the worst moments of the pandemic, have become a drag in the first half of the year. Kalyani undid his disclosure at Apple and reduced it to minimal expression at Alphabet, Amazon and Meta.

Torrenova, the March family’s SICAV with assets of around €909.2 million, has a decidedly conservative profile. 55.75% of equity is invested in fixed income securities while 21% of cash and only 16.61% is allocated to the stock market. In a year when fixed income is having one of its worst years in more than a decade, Torrenova ended the first half down 4.74%. Its national equity market exposure is limited to CaixaBank (0.26%) and Iberdrola (0.35%).

Apart from Alicia Koplowitz’s SICAV, which relies on Warren Buffett, Pfizer and Aplhabet for most of its foreign investments, the list of surviving investment companies of the great Spanish fortunes is complete: Gesprisa. The founder of Pronovias, Alberto Palatchi, merged his two SICAVs last year and at the end of June his investment vehicle had more than 807 million. The fact that he had entrusted part of his bet on the Spanish stock market to Repsol (4.32%), Santander (1.84%) and BBVA (1.55%) did not prevent him from achieving negative returns of 18.6% . Among foreign stocks, Total Energies (4.24%), Microsoft (3.62%) and Alphabet (3.41%) stand out.

- Advertisement -
Share
Facebook
Twitter
Pinterest
WhatsApp
Previous articlePS5: A patent shows how Sony could improve the DualSense controller
Next articleVox calls for the use of thermal and nuclear power plants and urges meeting the National Security Council on the crisis