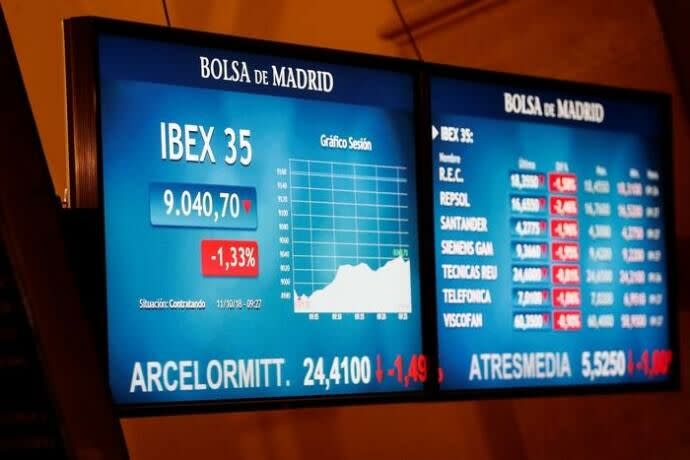 An example of the resistance shown by the Ibex is the withdrawal of bearish or selling positions in some companies on the Spanish stock market. At the beginning of the year, for example, Acciona had a bearish position in its shareholding of more than 0.5%, the same as CIE Automotive, Ferrovial, Indra, Linea Directa or Siemens Gamesa.

Short or bearish positions have nothing to do with the investment time horizon, it is a strategy by which an investor bets on the fall in the price of a security instead of on the rise. They are called short sales because they are sold before buying the stock.

Opening a short or bearish position refers to the action of selling an asset beforehand, waiting for it to depreciate, in order to buy it back cheaper in the future. It say, a short position is opened in order to take advantage of a possible bearish movement of the asset. Bears or short investors during the worst part of the pandemic were prohibited from betting against the fall of a value due to the veto of the National Securities Market Commission (CNMV). Specifically, it will be operational between March 16 and May 18, 2020 in several European countries, not only in Spain.

The National Securities Market Commission (CNMV) makes public the data on aggregate net short positions greater than or equal to 0.5% of the company’s capital, plus the total of those equal to or greater than 0.2% and 0 ,5%. It may be the case, therefore, that there are companies with a lower percentage that have investors in their capital betting against their upward trend on the stock market.

In addition to the withdrawal of the bears in companies such as CIE Automotive, Ferrovial, Indra, Línea Directa or Siemens Gamesa, the companies that have the most bears at the beginning of the year now suffer less pressure from these investors. Audax, for example, which is the value most sought after by short investors, now accumulates 6.61% in its capital compared to 6.64% at the beginning of the year. The funds Citadel Advisors Europe Limited with 3.74%, Linden Advisors with 1.18%, DE Shaw & Co. with 1% and Polar Asset Management with 0.69% continue to invest in Audax’s shareholding.

Something similar happens in the second Spanish company with the highest percentage of bears in its capital: Solaria. At the start of 2022, he had to make an accumulated position of bearish investors who controlled 2.95% compared to the previous 3.68%. At Sacyr, which is the third listed company with the most presence of sales positions along with Enagás, they have gone from controlling 3.10% to an accumulated 2.69%. The exception is Enagás, which started the year with a bearish position of 2.56% and now it is 2.69% and equals Sacyr in percentage.

They also reduced their weight in ACS and REE, which began the year with a percentage of bearish funds betting against their share of more than 2%. In fact, the London hedge fund AKO Capital has raised its bet to 1.58% of the shares of the construction company chaired by Florentino Pérez, but the Connecticut (USA) fund AQR Capital Management has disappeared from its shareholding.

Red Eléctrica, for its part, has seen Point 72 Europe and AKO Capital leave its capital, while now only the British fund Millennium Capital Partners remains with 0.49% of the shares.

Among the large Ibex 35 listed companies, the bears of Telefónica, Cellnex or Repsol stand out. In the case of the telecommunications operator, the world’s largest asset manager Blackrock has a bearish position of 0.62% and in Repsol the US hedge fund ExodusPoint controls a bearish position of 0.53%. In Cellnex, the company from the ‘City’ London DE, Shaw & Co. with 0.71%.

- Advertisement -
Share
Facebook
Twitter
Pinterest
WhatsApp
Previous articleThe price of the Saudi Riyal today in Egypt, Wednesday, March 16, 2022
Next articleAccording to his ex-girlfriend, Elon Musk “sometimes lives below the poverty line”: he slept on a mattress with a hole in it.