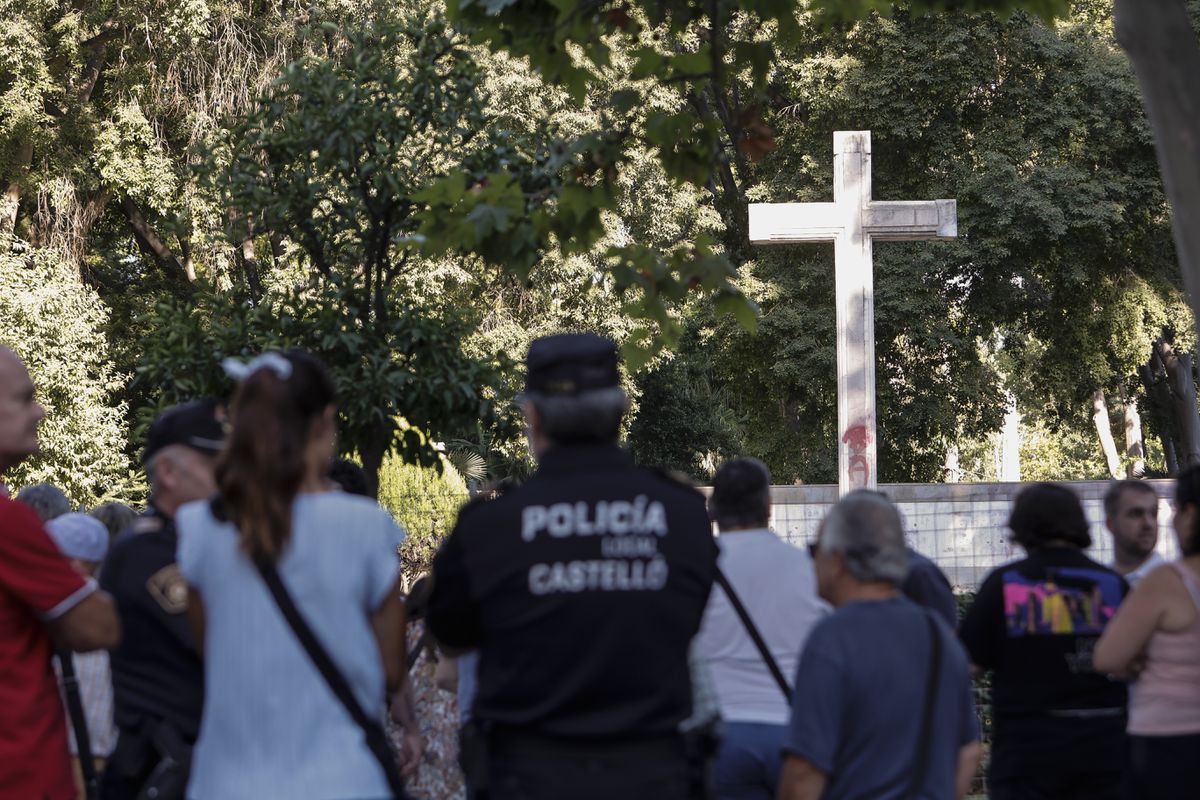 “To those who fell for God and for Spain. The gifts!” It was the original motto of the monument erected under a cross in Ribalta Park in Castellón. The Transition has managed to change the legend to commemorate the victims of violence without specifying it. Currently there is no written mention, but there is still the monument and the cross, which the City Council of Castellón authorized the removal of, in accordance with the Historical Memory Law of 2017, as they are considered vestiges of Francoism, in fact they have been a for years Gathering place for those who continue to celebrate 20N.

For the past four years, progressive local government has faced constant litigation and opposition from the PP, which this Wednesday accompanied Vox and the leaders of the Christian Lawyers’ Collective in a protest in front of the monument to the start of the transmission works of the Symbol. In view of the allegations against the removal project, the consistory decided to offer the cross to Christian denominations “in respect of its dignity as a representative religious symbol of the faithful” instead of leaving it in a camp. The diocese of the Segorbe-Castellón diocese was able to lay claim to the Latin cross that is displayed on the esplanade of a parish in the capital, La Plana. The transfer is borne by the city government itself, and Christian Lawyers has even resorted to this transfer to the diocese.

The start of the work has brought together, in addition to many politicians, supporters and opponents of the transfer of this Francoist remnant. The cries of “Spain, united, will never be defeated” were answered by “Spain, tomorrow, will be republican”, chanted under the supervision of some twenty national and local police officers. The fact that the company gave the order to move the cross, delaying the start of the wood coating to avoid damage, made it possible to dilute the concentrations without arguments after just an hour.

For the spokeswoman and president of the local PP, Begoña Carrasco, the removal of the cross divides the people of Castellón. “We stand for harmony and freedom,” said Carrasco, who, in line with Vox, believes that the resignation, which the city council itself approved in 1979 to commemorate all the victims of violence, is enough to make one forget that it was a Franco holdover trades.

Councilor for Culture and Democratic Remembrance Verónica Ruiz (Compromís) has spoken of a historic day because “79 years after its construction, it is time to remove the cross”. “It will be abolished because it is a symbol and a democratic anomaly,” he defended. The ceremony, which was also attended by former Education Minister Vicent Marzà, was attended by Compromise Deputy Joan Baldoví, who stressed that the law is there to be obeyed. “Everything is arriving and the transfer decision seems very reasonable to me.” The Councilor for Works and Urban Projects, José Luis López (PSPV), also celebrated the start of the works, highlighting the meeting of the extreme right of Vox and the extreme right of the PP , which acted against the Francoist remnants. In addition, he pointed out that the project allows the recovery of the space that will be integrated into the cultural heritage, based on the plans before the installation of the monument to be removed, dating back to 1926.

According to forecasts, the transfer, which is worth just over 60,000 euros, should take six weeks. After the removal of the cross, urban furniture will be installed and the plantation of some species will be restored.