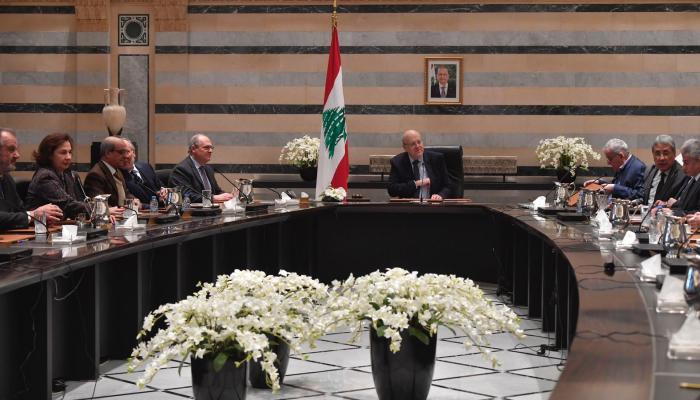 The Lebanese President, Michel Aoun, affirmed that no delay in the approval of Capital Control, the recovery plan and the law on funds transferred abroad is justified.

The President of the Republic, General Michel Aoun, received on Saturday afternoon at the presidential palace in Baabda the Minister of Justice, Judge Henry Khoury, who informed him of the deliberations of the Council of Ministers meeting today at the Grand Serail, especially in relation to the evolution of the judicial situation.

The Council of Ministers dedicated today’s session to discuss judicial and banking developments, following the judicial decisions taken by the Mount Lebanon Public Prosecutor against several banks, including the seizure of their funds and the travel ban of their boards of directors, which which led the banks to strike for two days as a warning.

President Aoun expressed his satisfaction with the position issued by the Council of Ministers regarding guaranteeing the independence of the judiciary and non-interference in judicial affairs with respect to the principle of separation of powers, as long as the law follows its course without any discrimination , and preserves the rights of all, especially the rights of depositors.

President Aoun welcomed the mandate from the Minister of Justice to develop a vision to address the judicial situation and the causes of any shortcomings that might occur, in addition to the lack of specification of the maximum limits for salary and pension withdrawals in banks.

President Aoun considered that accelerating the completion of the draft recovery plan and related bills, in addition to the approval by parliament of the “Capital Control” law, among the issues that impose the interest of citizens so that be completed as soon as possible, especially since there is no justification for any delay in it, in addition to the approval of the law on funds transferred abroad and direct execution of the criminal audit contract.

For his part, Prime Minister Najib Mikati announced that the Minister of Finance had been instructed to take the necessary measures not to place limits on the withdrawal of wages by banks, and urged the Banks Association not to turn to matters negative and cooperate to get out of the existing crisis, hoping that the House of Representatives accelerates the approval of the “Capital Control”.

In response to his accusation of protecting the banks, Mikati said, in a statement from Government House after the cabinet session, which was devoted to discussing judicial and banking developments, that “the resignation is for nothing and the government did not meet to protect banks, and our duty is to protect all sectors and institutions”, and pointed out that “the objective of today’s extraordinary session of the Council of Ministers is to address the judicial issue and restore the balance in its work, based on in the constitution, which provides for a balance of powers”.

Mikati said that “the goal is to maintain balance in the country” and pointed out that “based on the principle of cooperation between the authorities, the council asked that the law be adopted without discrimination and that judicial matters be resolved in accordance with the laws by the columns of judicial authority, each according to its powers.

He pointed out that “the Minister of Justice has been appointed to correct the defects and present them to the Council of Ministers.”

As Mikati promised that “more than 90% of depositors’ money will be held in the Lebanese state and paid out,” he said, “Our goal is to protect small depositors, and no limits on withdrawals will be requested. bank salaries. Also, I call on the Banking Association not to move towards negative issues. And cooperate with us to get out of the existing crisis.”

The Association of Banks announced in a statement that it will carry out a strike, which it described as “notice”, next Monday and Tuesday, March 21 and 22, as “the first step to alert and raise awareness of the seriousness of the current situation”, noting that your strike is a strike. My warning against arbitrariness so that stakeholders stop evading their responsibilities and put them in the banks, and take the initiative to assume their national responsibilities and take the necessary measures to protect the public interest.

The association called for “correcting the current imbalance, enacting the Capital Control Law as soon as possible and approving a recovery plan and starting its implementation,” and hinted that after its strike it will take “other measures that are necessary to preserve the economy nation and the environment. greater Lebanese interest”.

The banks’ decision follows the seizure of the assets of six of them, accused of transferring billions abroad.

The banking sector is in great turmoil after Aoun’s decisions, which Mikati rejects, while President Michel Aoun supports them.